Like the turtle and the hare, progress on the Wildflower will never be fast enough for the residents (hare) but could it be any slower than the pace set by the City (turtle)? I think not….As pointed out in this tracking update by Jim Wood, progress is now actually measurable and the end result on two fronts beginning to show the ‘proverbial’ light at the end of the tunnel. City Staff indicates that a Wildflower ‘passive’ park may be open to the public in the next few months. This park will still be laden with asphalt and concrete in the form of parking lot spaces but at least it will be open to the public for access to the waterfront. That is a good thing! The City’s consultant last month conducted a charrette with over 100 citizens participating. A compilation of ideas is now in progress and when presented, we, the resident, will see the suggested changes within our park system to fulfill the often heard rhetoric that Boca Raton is a “city within a park.” Attached below is a short video capturing the newly opened Sullivan Park in Deerfield Beach. Perhaps, the cooperative attitude demonstrated there will be a positive role model for us here….enjoy…More on the Wildflower park possibilities later this week. Stay tuned!

This article presents some updated information regarding Wildflower Park progress. The tracker graphic included toward the end of this article has been updated accordingly. Past update articles are included for reference in Attachment 1. Following is a brief update discussion on each of the open phases.

Residents have been asking for Wildflower Park to be opened as a passive park while the long term EDSA waterfront study is proceeding. It appears that the City may be opening the park for residential use in the next couple of months. The park design for this opening looks like it will be similar to the design when the park was opened for the Boca Raton Boat Parade on the evening of December 17, 2016. This means that there will still be a massive amount of asphalt for parking cars, but a relatively small amount of natural area for recreation by residents. It should be the opposite. It is hoped that the next EDSA presentation to residents on July 12, 2017 will articulate a more resident-friendly passive park design that will be implemented in the short term while the waterfront study is rolling out.

The City Council approved ordinances changing the Wildflower parcel comprehensive plan map designation and zoning from Commercial to Public Land and Recreation respectively at the June 13, 2017 regular meeting. Prior to this, the P&Z board voted to recommend approval of the ordinances. Approvals were by unanimous votes.

“EDSA, the City’s consultant working on the waterfront master plan, will be hosting a second public outreach meeting at the Downtown Library at 400 NW 2nd Avenue on Wednesday, July 12 from 6-8pm. EDSA will be sharing conceptual plans and recommendations.” 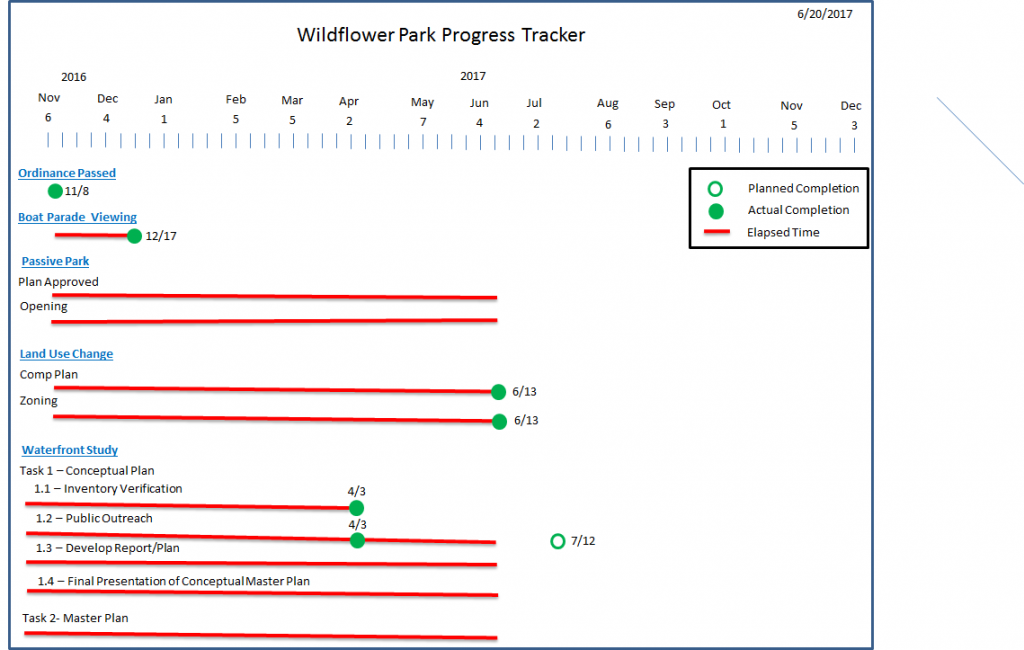