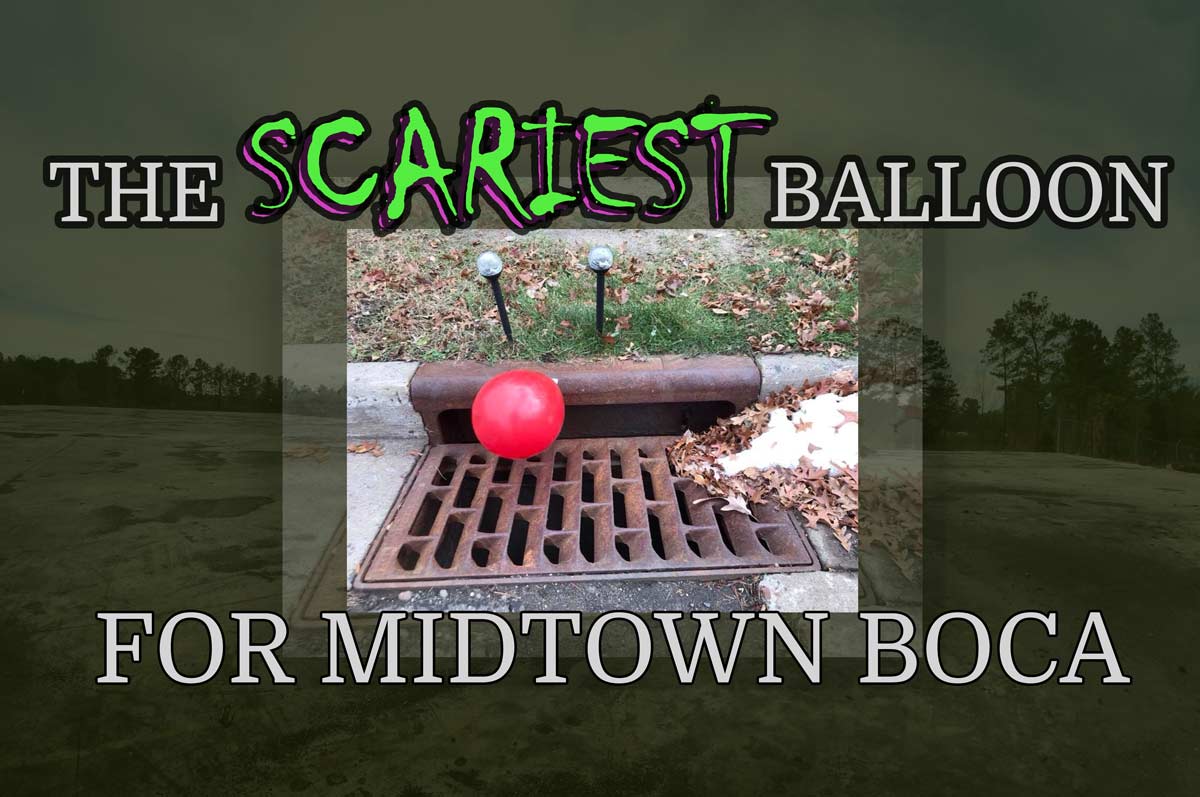 Midtown hasn’t had the easiest time with balloons in 2019. We’re all aware of the scare in Town Center, where popping balloons were mistaken for gun shots and a panic ensued. Luckily, with those balloons, our panic turned out to be little more than post-Dorian jitters. The little balloons popping made some of us run in fear. It’s ironic that little balloons made the folks in Midtown so agitated, because there’s still a balloon problem in Midtown. Boca’s like one big balloon, and what’s happening to that balloon is pretty scary for us Midtowners.

Just like Boca has borders, a balloon contains a fixed amount of air. Anyone whose played around with a long balloon knows that if you squeeze one end, the other end gets fatter. No matter what the balloon is made of, or what it’s filled with, the rule is generally the same: step on one end and the other end blows up.

I grew up in Boca during the time when Town Center was built. I rode my bike through it as it was being built, before I knew what it would be called. When I learned that it was going to be called “Town Center” even though it was “way out west” it was somewhat comical. I mean, who would take that seriously, something built so far west, west of I-95, being called “Town Center”? Funny.

But as I grew up and began to drive, Boca grew up with me. I worked summers with my dad, helping build homes in communities to the west, like Boca West, St. Andrews, and Woodfield. I worked delivering pizzas west of I-95 and as I was finishing up FAU I had a cute little apartment next to Town Center. Life in Boca was no longer centered east, and Town Center’s name started making more sense.

I watched Town Center, and the area around it, in the 80s and 90s, “steal the air” from Downtown Boca. Town Center “stole” the title of being Boca’s “central mall” from the mall I had grown up next to: Boca Mall. Royal Palm had started to decay around the time of Jan McArt’s dinner theater leaving. Downtown was said to be “on the decline”. My fondness for and loyalty to the Boca Mall made me feel like Town Center killed it, and did it in a dirty way, by branding itself as the new center of town.

Downtown had to be stepped on, or deprived of oxygen, for that to happen. Even before IBM began to shrink, even before Bill Gate’s DOS ate OS2’s lunch, Downtown Boca’s decay began. In 1980 the CRA was formed to address that decay. Resolving that decay was the rationale for building Mizner Park.

Fast forward almost four decades since the CRA was formed to draw that air back into Downtown. If development is the metric for success it can be said that the effort of the CRA was very successful for Downtown. It’s booming. That place that we all called “out west” back then is now called Midtown.

Recently, the decade long planning process to allow mixed use and residential re-zoning in Midtown hit the wall. City Government and elected officials have locked the brakes on the process and the developer, Crocker Partners, previously leading the private push towards re-zoning, has given up. Crocker is no longer trying to get the area zoned for mixed use. All the City’s talk about allowing the progress to take place, the progress that justified investors to see opportunity in the area, was just hot air.

If I was an investor I’d be furious. Why? I’d be furious because of Downtown. Look at the rampant residential development that’s been allowed Downtown. Between the monster that is Tower 155, the phenomenal investment and work going into Royal Palm, Mizner Park and the upcoming Virginline Train Station, it’s obvious which end of the balloon has all the air in 2019. The effort to bring the balloon back into balance hasn’t focused investment in the center of town, once again. Now, with the center of town actually being Town Center, crowded Downtown has snatched back the crown it technically stopped deserving four decades ago. Midtown loses a new train station. Downtown gains one.

It’s not just about the loss for Midtown commercial property owners feeling left out of the explosive demand for mixed-use. That demand is here, like the rest of the planet. We see that demand being answered Downtown.

Lots around Downtown, in previously blue-collar neighborhoods, with homes containing less than 1500 square feet, are now selling for close to a million dollars. It will be a long time for Midtown home owners to see that kind of value growth. Now, maybe we’ll never see it at all.

Balloons are scary. Midtown residents should be agitated, but not by little balloons popping, but by the obvious, unavoidable, unfair numbers making it impossible to ignore that someone is stepping on our end of the Big Boca Balloon. Someone is getting the oxygen, and it’s not us. Someone’s property is appreciating pretty fast. What about ours now?