Home Topics Out with the Old….In With the New! Or Is It?

This is not meant to be a rhetorical question. For the last few years, residents have over and over again uncovered situations of ‘developer friendly’ activities by the City Administration and the City Council.

Through these raised voices, the elected officials have been shamed into questioning staff to look into these inconvenient truths. This is the impact of an informed citizenry; the mantra of BocaWatch and the nemesis of the privileged few with the help of colluding officials.

The public has loudly complained about the overdevelopment of Boca Raton. These political pressures brought to the elected official’s doorstep has resulted in uncovering proof of the close connection between the city staff and city council members with the developer lawyers and professionals that have achieved results in opposition to the public good.

In November, resident voices caused the City Council to have the administration prepare an overview on ‘open space’ under Ordinance 4035; the ordinance that, prior to the 2008, was the basis for development in Boca Raton. Ordinance 4035 has clear language presenting the concept of ‘open space’.

‘Open space’ is measured by a percentage of total space contributed by a project to be in the public realm. In a building project of over 75 feet in height, this open space requirement is set at 40%. Of this 40% space calculation, Ordinance 4035 dictates that 65% be ‘open and uncovered’ from the ground to the sky. The remaining 35% can be covered so long as it remains available to the public on the ground level. The ordinance is clear and unequivocal. Clarity, however, has not been the way the ordinance has been applied.

It appears that in 2003, the then Community Redevelopment Agency (CRA) Director, Jorge A. Camejo, published a memo which interpreted Ordinance 4035 in a manner inconsistent with the development order and in a manner that calculated ‘open space’ to the advantage of the developer. Since then, additional favorable interpretations by staff have moved the developer friendly interpretation even further. (see below…July 28, 2003 interpretative memo by Mr. Camejo, and November 25, 2015 memo from Leif Ahnell, the City Manager and current CRA’s Executive Director).

At the December 7th CRA workshop, the administration presented its findings on the official record while asking the CRA Board for consensus of what corrective action should be taken. Staff recommends that a new memo be issued rescinding the 2003 memo and replacing it with one that is consistent with the terms of Ordinance 4035; a reasonable suggestion. However, considering the serious nature of this wrong interpretation, staff’s presentation to the CRA was so understated, so innocent, so innocuous, that it was almost sickening.

Some of the admissions made in the December 7th presentation are as follows:

The reader is encouraged to take the time and view this presentation during the December 7th CRA meeting. During the presentation, CRA Member Rodgers comments that he “commends” staff for bringing this item forward. COMMEND…really!

Staff is either incompetent or in collusion with outside interests. These are the only reasonable conclusion for staff to not have known these circumstances years ago. Incredible!

One speaker in the public comment section, Attorney Charlie Siemon, stated that he had participated in the development of Ordinance 4035. Attorney Siemon has been utilizing ordinance 4035 for his clients for many years. He is perhaps the most knowledgeable person in our community that can offer clarity on how this all came about. He, of all people, should be able to provide the historical perspective on how this circumstance survived the last 12 years.

This circumstance is so egregious that it is almost unspeakable. Instead of demonstrating outrage, current members of the CRA seemed focused on the impacts to the developer with little expressed concern for the potential losses to the public realm or how staff’s incredible ineptitude contributed to these circumstances.

-BocaWatch calls for the CRA attorney to prepare and present a ‘Zoning in Progress’ memo announcing to all interested parties that there is an inquiry of significant proportion in progress.

BocaWatch does commend CRA member Weinroth for vocalizing that the public needs to have an opportunity to understand the issues that have been uncovered and have a voice in any corrective action anticipated.  Hopefully the citizens voice will have equal weight to the development community.

Of course, despite this and other wrong items that residents have uncovered, change is not apparent….change needs to be forced…. 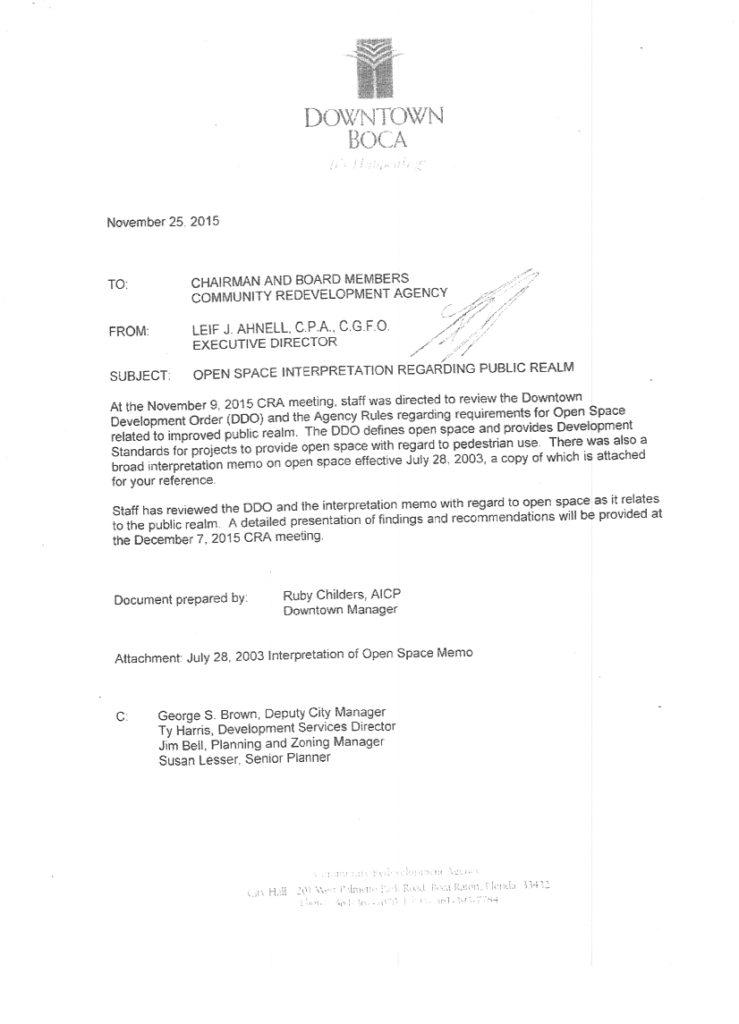