Home Boca Raton Development City Says Yes to $7.5 Million yet No to $313 Thousand

In December, 2009 Boca Raton’s City Council decided to buy the Wildflower property for $7,500,000, but in December, 2015 decided not to spend $313,000 to open it up and make it available for citizen use. In an additional slap in citizens’ faces, the City Council at the same meeting in December, 2015 decided to move forward with the permitting process for a floating dock at the Wildflower site at an estimated cost of up to $370,000. These decisions are contrary to citizen demand and prudent management practices.

The City’s economic situation in December, 2009 was being impacted by the Great Recession. In fact, the City’s FY2009-2010 budget states that the City is reducing operating expenses in many areas to address a slowing economy. The City Council, however, had no problem finding $7,500,000 to buy the Wildflower property. The Mayor’s stated goal for the purchase was to provide waterfront access in the downtown to the thousands and thousands of citizens who cannot afford a boat and have no other access to the waterfront.

For over six years the Wildflower site has remained closed to citizen access and is an eyesore to the numerous citizens and visitors who pass it daily. 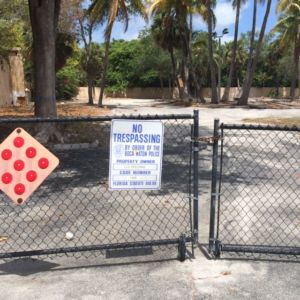 The City seems to be stalled regarding opening the Wildflower site to citizens as it negotiates a long term lease of the property to The Hillstone Group. This organization owns the Houston’s restaurant chain as well as a few other brands in the same category. When Hillstone recently informed the City that it was no longer interested developing the property, citizen demand for a park on the site caused the City Council to evaluate developing a park on the site.

In December, 2015 the City Council reviewed a staff estimate of $313,000 to perform the necessary work to open the site as a park. Put in context, this is about 4% of the purchase price to make the site useful as a public park and fix a very visible six-year problem in the downtown. Unlike when the property was purchased in 2009, the 2015 macro-economic environment and the City’s financial outlook are in much better shape. The City’s FY2015-2016 budget includes a statement that the City has emerged from the economic challenges in a strong position. The reason for not opening the Wildflower site as a public park cannot be economic. Perhaps it is political. A recent BocaWatch article suggests that this is the case. /what-makes-a-great-city/#comments.

Since Councilman Jeremy Rodgers took the lead in evaluating opening the Wildflower site as a park, an email requesting evaluation results was sent to him on December 28, 2015. So far no reply has been received.

Numerous surveys conducted by the City, social media and the Boca Raton Tribune all confirm high citizen demand for a park on the Wildflower site. The following table shows details of the huge citizen demand for a park at the Wildflower site. Note that the scoring of the City’s Electronic Survey was shown to be a misrepresentation of actual citizen intent. The details are included in an earlier BocaWatch article. https://bocawatch.org/lies-damned-lies-and-statistics/ 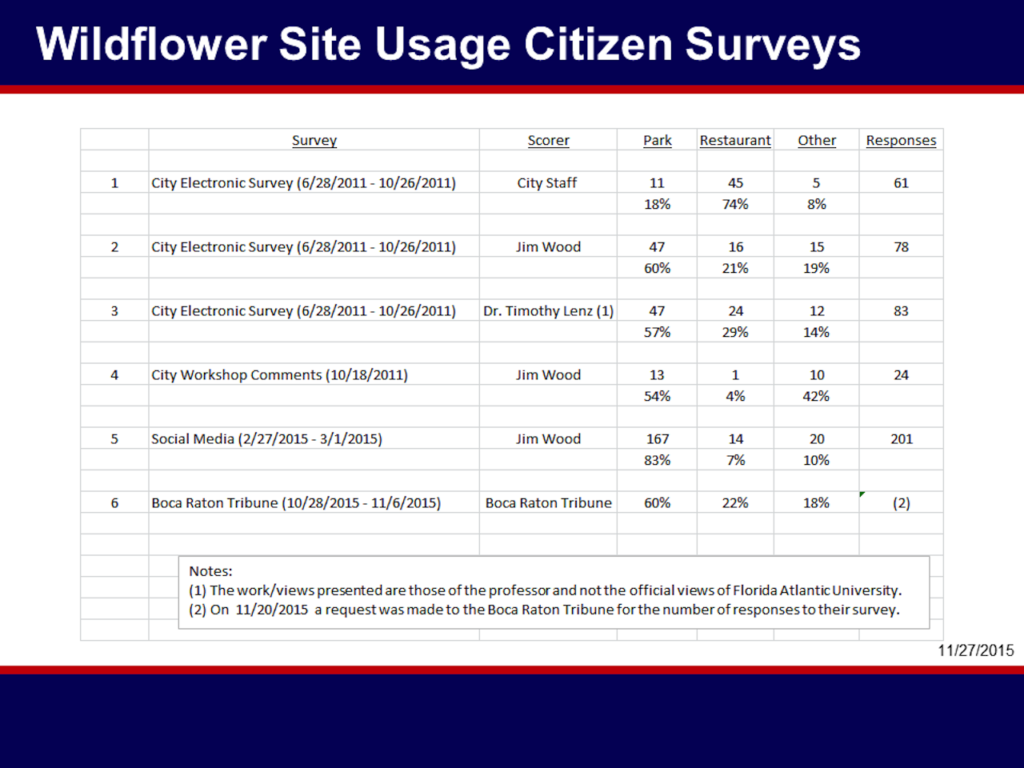