City Council elections for seats C and D are off and running.  Candidate profiles are a good way to bring relevant information to the voting public.

Presented here is a profile on Seat D Candidate Armand Grossman who has filed to run for City Council and who has begun an aggressive campaign to attract the attention of Boca Raton voters.

BocaWatch has uncovered a lot of material from the internet for our readership to review.  Residents need to consider carefully those individuals seeking public office; those candidates who, once elected, will make decisions directly impacting all residents’ quality of life.

Some of the uncovered items are current and some date back to Mr. Grossman’s previous political history. All items are meant to provide the reader with a complete picture of the candidate; the individual within which you are being asked to place your trust.

Mr. Grossman entered the race on January 10th after Councilman Robert Weinroth withdrew to run for the County Commission against Susan Haynie, who Mr. Grossman is now endorsing for the county race and from whom Mr. Grossman enjoys support.  Last week, on February 1st, Mr. Grossman hosted his kick-off event. (See below)

As a long-time resident of Boca Raton who believes our City should be resident-friendly for ALL residents, Armand will bring his deep commitment to community service and tireless work ethic to the City Council to ensure that Boca Raton not only continues to be such an  amazing place for families and businesses but keep Boca Raton moving forward in a responsible manner.

Armand came to Boca in 1965 as a student at Florida Atlantic University. He and his family immediately fell in love with the beautiful beaches and unparalleled ambiance of the City. Since that time he has developed a long standing, highly distinguished affiliation with Boca Raton and Florida Atlantic University. Grossman’s deep affinity for FAU began the same year the university opened, as he was a member of the inaugural class. As an undergrad, he was a founder of the Student Government Association, wrote the SGA Charter and served in the first student senate. He was also a founder of the student newspaper, The Atlantic Sun, and served as its first sports editor. Grossman received his bachelor’s degree in political science from FAU, along with a master’s degree in education and an MBA in 1977. Along his academic path, he also has earned a certificate in finance from Harvard University.

Professionally, Grossman has spent 45 years in public and private education. While serving in Dade County schools, he was the basketball coach at Miami Northwestern Senior High School where his teams lost a total of six games over a four-year stint. In the past 18 years, he has conducted nearly 1,500 seminars worldwide on the subject of personal transition and individual achievement.. Grossman served as president of the FAU National Alumni Association for two consecutive terms and as the chair of the FAU Foundation Board of Directors in 2004. Subsequently, he was appointed to the FAU Board of Trustees where he served from 2005 to 2011. During his tenure he was asked by President Frank Brogan to be the “point guard” in getting the new campus stadium built which was achieved in 2011. Recognizing the critical need for physicians in the area he was most instrumental in the development of the new Medical school at FAU.

HERE IS YOUR CHANCE TO COME MEET ARMAND GROSSMAN!

Checks can be made payable to “Armand Grossman Campaign”

Maximum contribution per person or entity is $1,000. Contributions are not tax deductible.

If you are unable to attend, but would like to contribute, checks can be mailed to:

or you can donate online at www.armandgrossman.com/donate/

For more information, contact Arielle Richardson at 561-702-2864 or arielle.richardson86@gmail.com

When you scroll down to the bottom of this invitation, you will notice that it is not the ‘Campaign for Armand Grossman’ sending the invitation; the invitation was sent from ‘Investments Limited’….‘Investments Limited’ is the real estate company owned by the largest commercial property owner/developer in Boca Raton, Jim Batmasian; yes, the same Jim Batmasian involved in ‘secret financial dealings’ with our embattled mayor, Susan Haynie.

Mr. Batmasian has taken a very active role in the candidacy of Mr. Grossman.  Residents may also be noticing the ‘Elect Armand Grossman for City Council’ signs all up and down Federal Highway; all on ‘Investments Limited’ properties; yes, again, properties owned by the same, Jim Batmasian. 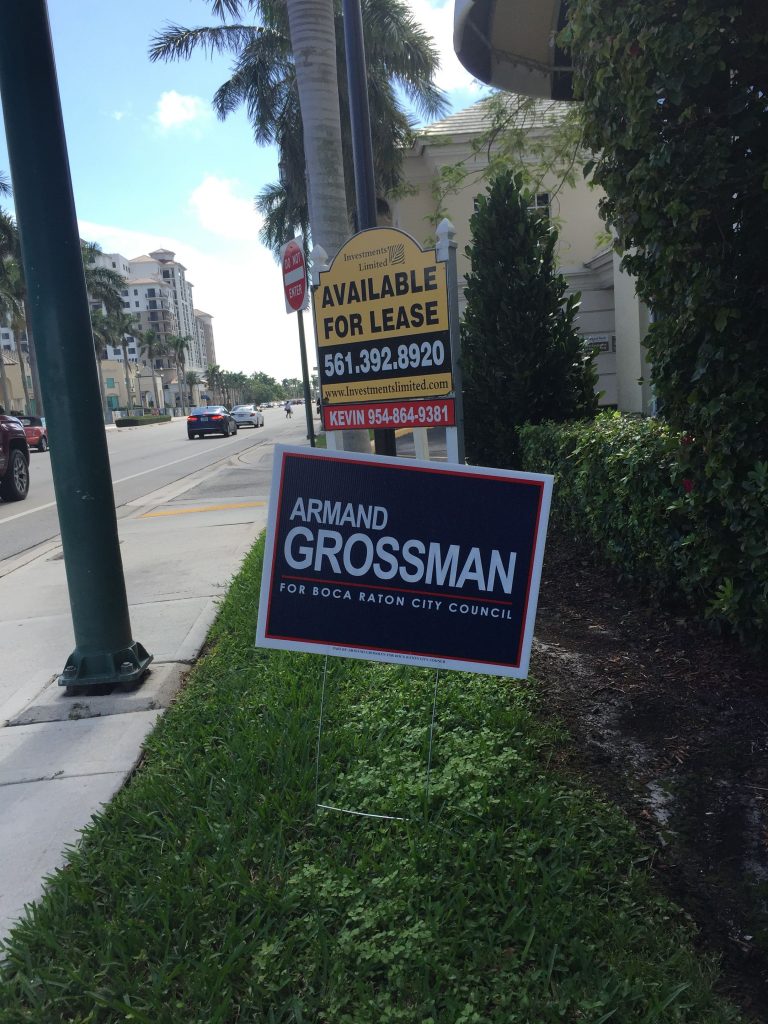 Given this deep intimate involvement with Investments Limited and Mr. Batmasian, and considering Mr. Grossman’s real estate background, the opening sentence in his invitation referencing ‘resident friendly’ can only be taken as a joke.

Mr. Grossman’s involvement in commercial real estate;  his involvement with large downtown development project(s); and his history in a real estate marketing program can only be viewed as ‘developer friendly’;  far from what is main stream ‘resident friendly’.

In the invitation, Mr. Grossman states that he came to Boca Raton in 1965 and infers that he has a long history of public involvement here.  What he fails to tell you is that after he graduated FAU, he spent the next 30+ years in Dade County where he taught school from 1974 to the early 2000s, moving back to Boca Raton in 2002.  Both in YouTube interviews available on the internet and now in his current campaign speeches, he suggests deep involvement in the growth of Boca Raton; a specious claim at best.

Mr. Grossman was active in Miami Springs Florida politics in the late 1970s.  He held position of City Councilman from 1979 to 1981 when he resigned to run for the Miami-Dade County State Senate District 33 seat in 1982 as a Democratic Candidate.  He lost in the primary.  Again in 1984, Mr. Grossman ran for the State House of Representatives, District 109, Miami-Dade County again as a Democratic candidate endorsed by then Democratic Governor Bob Graham.  He lost that election in the general election.  In 1987, Mr. Grossman again ran for City Council in Miami Springs but lost in a run-off election.

Mr. Grossman filed to run for Boca Raton City Council in 2015 against three other candidates.  At that time a group named ‘Floridians for Integrity in Government’ circulated an informational piece about Mr. Grossman reporting that the state of Florida had brought an action against Mr. Grossman for fraudulent practices in some sort of ‘get rich quick scheme’. 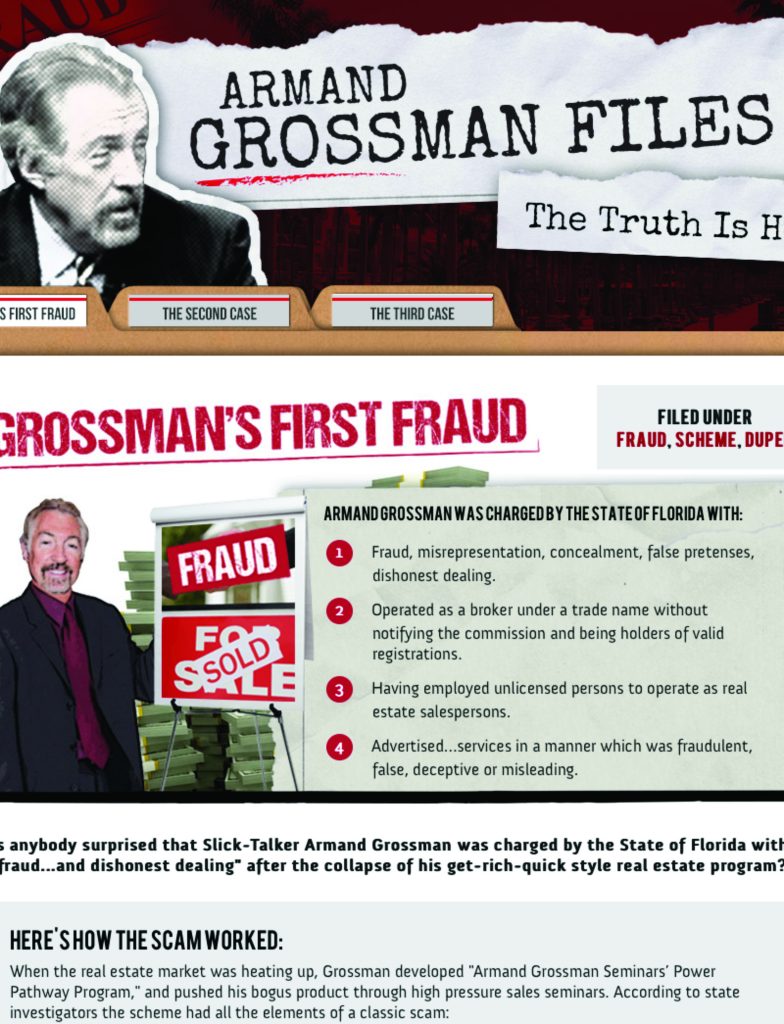 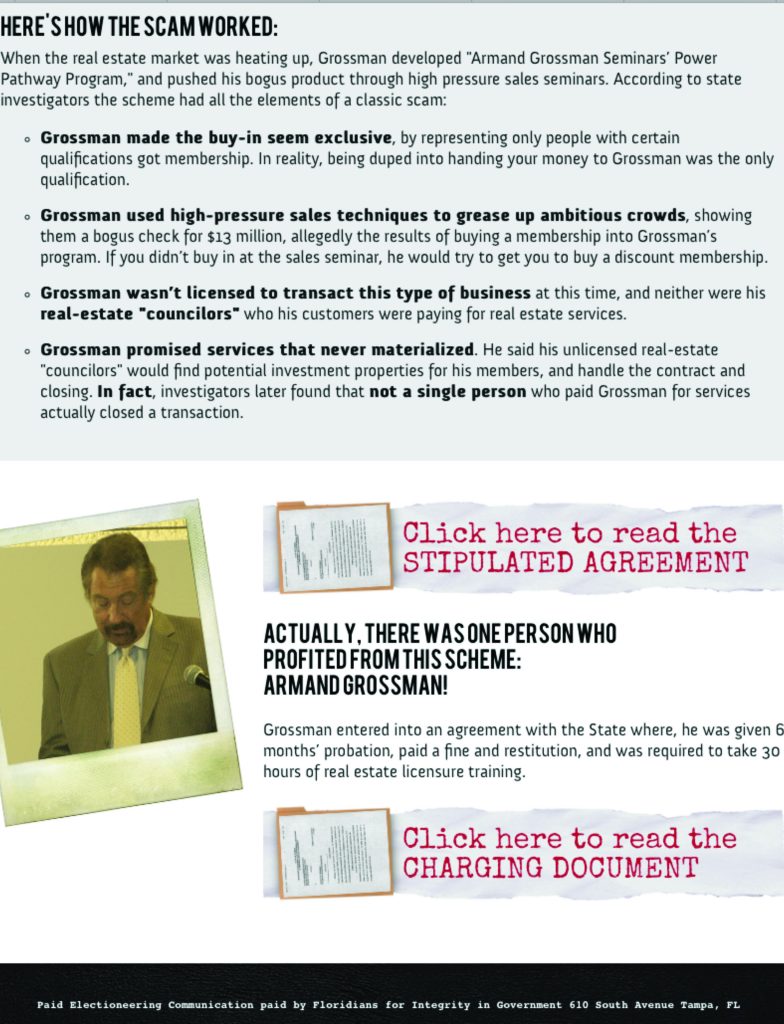 Almost immediately after this item hit the voters’ in-boxes, Mr. Grossman withdrew from the race.  This entire episode was captured by Sun-Sentinel reporter Ann Geggis.

There are other back stories circulating about the items brought forward here.  However, enough said!

Residents will have opportunities over the next  few weeks to inquire further and to hear Mr. Grossman in the candidate debate scheduled for February 8th, a debate hosted by the Federation of Homeowners at the city’s 6500 N. Congress Ave location.

Mr. Grossman has been invited to interview on BocaWatch but, to date, has not scheduled a date and time.  BocaWatch again extends the opportunity to Mr. Grossman to submit campaign platform materials and sit for an interview.  If he accepts, BocaWatch will publish the information and the interview for, you, the readership to consider.

Two other candidates are running for this same seat:  to wit:  Monica Mayotte and Dr. Paul Preste.

Candidate Mayotte has been in for the interview and BocaWatch will publish her profile next week.  Dr. Paul Preste has not responded to requests to schedule an interview.  When he does, BocaWatch will provide the readership his information.

An informed resident is of great value to the community!!!

Your Vote is Your Voice; Let Your Voice Be Heard Loudly at the Ballot Box on March 13th .