A few weeks ago, I published an article that examined the notion of ‘complacency’ as it relates to the City of Boca Raton’s enabling document, the City Charter. The City Charter, created over a half century ago, is an obsolete document not meeting the modern day needs of Boca Raton. Here is the other, first half of this duo of articles titled “Good Governance”.

A Charter Review Commission would have as its stated objective identifying a broad range of Charter improvements to achieve higher standards of open and transparent government and establish a higher degree of resident representation by the Council, city wide. My proposal is to suggest Charter changes addressing deficiencies in sections of the city that have been historically and demonstrably under-represented in the public discourse; a City Charter change to ‘district’ the city and require the elected representative to reside within the district while standing for election citywide.

As it stands now, the city is represented by five (5) elected officials filling seats for five (5) undefined districts. There is no geographic definition as to the boundaries of these districts nor is there any requirement as to where a candidate resides within our city’s boundaries. Possible, albeit improbable, all five (5) City Council members could be elected from a small geographic section of the entire city; to wit: five elected officials conceivable could be elected from areas west of I-95; areas that were not in existence when the City Charter was first adopted, a half century ago. 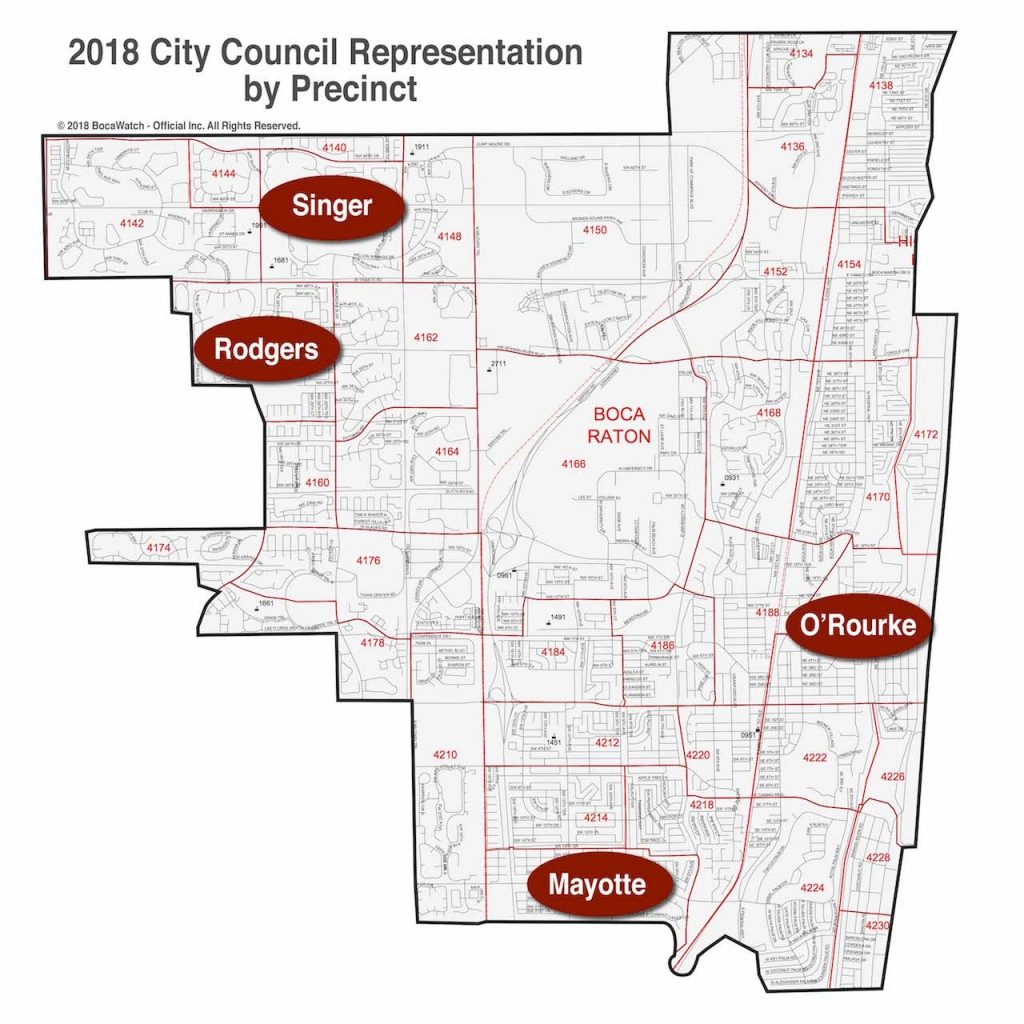 Over the years, I have publicly and privately addressed this possibility.

In a recent private conversation with Michael French, a community activist in a woefully under-represented section of the city north of 20th Street and east of Dixie, I commented on the need for ‘districting’ Boca Raton and requiring the District’s council member to reside within the district. He concurred that this is a needed improvement in Boca Raton’s governance and I committed to advocating for such a change.

Recently, in response to Michael Liss’ Midtown CRA article, Michael French posted a thoughtful comment that publicly raised this unequal representation situation and documented the many promises made to his ‘district’ but unfulfilled over the years. His comment is reprinted here for illustration purposes:

I agree with Mr. Liss.
I would add to the suggestion, since he rightly defines an area which is blighted, as one criteria for a CRA, I enthusiastically nominate the area from: NE 20th Street to Yamato Road, encompassing ALL OF THE NEIGHBORHOODS SANDWICHED BETWEEN DIXIE & FEDERAL, INCLUDING DIXIE, NE 2OTH ST, MOST OF FEDERAL, AND THE FIVE CORNERS SLUM STRIP PLAZAS! The past 3 administrations, despite scores of requests from residents, have failed to give this area the attention it deserves AND NEEDS!
Read more of the entire comment here.

Establishing a Charter Review Commission is a necessary ‘next’ step to achieve good governance in Boca Raton.

Along with the Internal Auditor position advocated in my previous article, districting is essential so that residents from all sections of the city have a representative voice on the City Council to advance the needs and desires of the individual district. Pointing out the district’s challenges is not the end of the discussion. It is merely the beginning! Leadership requires identification of a practical solution; a solution to address what may be the identified possibilities.

To that end, I again spotlight a model for discussion from the city of West Palm Beach. The excerpted WPB charter provision below is offered as a starting point for a public debate on the subject of equal representation. In the WPB example, the city is divided into five (5) districts; five (5) commissioners are elected citywide but required to live within a designated district. The mayor is able to reside in any district. The WPB model has five (5) voting commissioners and a mayor. The commissioners all vote on policy and budget items. The mayor votes only in the event of a tie but, the Mayor has veto power, that, when exercised, requires a super majority vote of the members to override.

Below is the language from the WPB City Charter. This is offered merely as a starting point for a public discussion and not the suggested end result for Boca Raton. However, as our city is closing in on a population of 100,000 residents, it is more than appropriate time to consider alternative ways to provide fair and equal representation for the residents, city wide.

At the risk of becoming a ‘wonk’ on public policy, it is clear that Boca Raton is at a directional crossroads for its future. Leadership requires elected officials to advance safeguards and assurances to better represent all residents in all sections of the city.

As I have often stated, communication and negotiation are essential qualities to achieve these ends; qualities distinctly missing in the public discourse for at least as long as I have been observing Boca Raton politics.