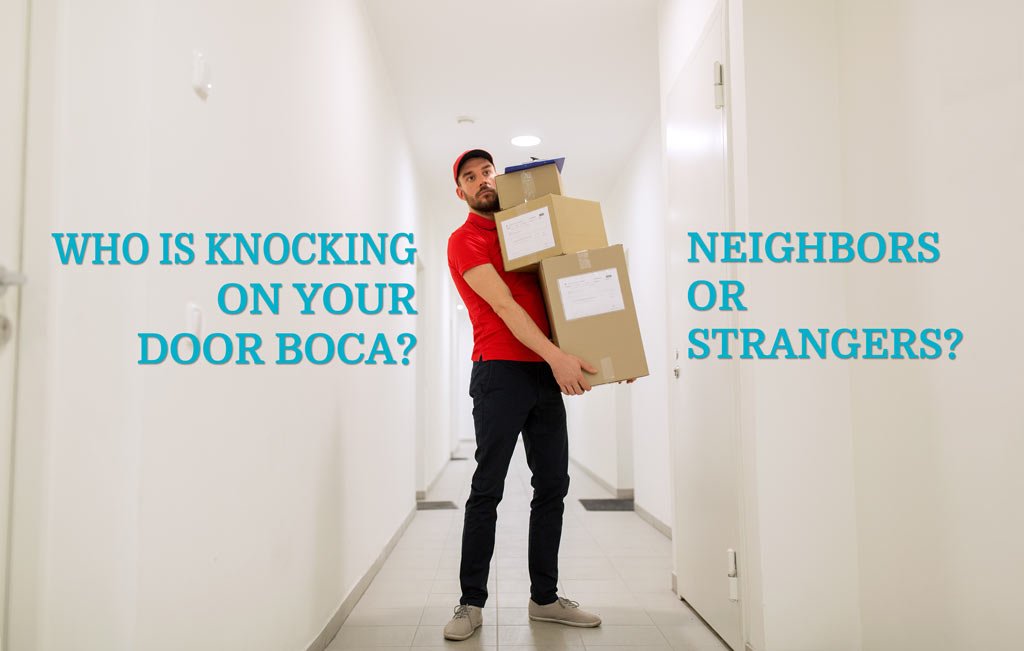 Last week’s murder in Colonade has got Boca Raton upset. It doesn’t just hit close to home because it’s literally within our city, but it’s troubling because of what was happening between the alleged killer and his victim: it was what should have been a simple appliance delivery. How many of us depend on delivery and service people coming on to our property all the time? Everyone in Boca Raton? Who hasn’t welcomed strangers through our doors, depending on them to behave according to the expectations we have for ourselves, being cordial, being kind? But last week’s tragedy reminded us we’ve got reason to be cautious, and less trusting. It reminds us that strangers aren’t neighbors.

There is a way to diminish the need for people we don’t know to be knocking on our doors. There is a way for us to be less dependent on people who don’t share our love for our neighbors. It’s all about encouraging more immediately local affordable housing.

Everyone wants good neighbors. It’s natural to hope that our tastes in picking our homes yields neighbors similar to ourselves, people with the same values. We’ve got vested interests, with our neighbors, to keep our neighborhoods safe and nice, places where people want to live. So there’s reasons to get to know our neighbors better. It pays to invest time into relationships with neighbors because they’re the people we’re going to run into most often. We learn who our neighbors are. If you’re fortunate, you grow fond of your neighbors.

Boca is growing more dense, and more expensive. Lots that held $300,000 homes a decade ago are now being sold with McMansions listing for close to 2 million. Developers who are building Downtown are not producing “affordable” units but rather units that people of above average wealth can afford to buy and live in. The choice to build high price units, not low priced units, is intentional. It’s rational investment and City Government seems like it’s unable to do anything other than welcome it. Who would want to build affordable housing when it’s possible, with the same effort, to profit orders of magnitude more by targeting the units towards more affluent buyers? What city official would want to generate less tax revenue instead of more on the same piece of property?

We see this same thing happening all around the world. The protests in Hong Kong this summer are fueled, according to economists, due to housing becoming less affordable. Since 2003 the average home sale price in Hong Kong has risen 300%. It’s now the most expensive place for housing in the entire world. Yesterday, on FOX News, John Bussey from the Wall Street Journal explained how developers in Hong Kong are buying property that once was low priced housing, moving the tenants out, knocking it down and building high priced condos and resorts.

In spite of there being a few developers with the desire to build affordable housing, having low priced housing built nearby is unpopular to people who’ve purchased high priced homes in the area. Groucho Marx once remarked he didn’t want to “belong to any club that would accept him as a member.” That sentiment is in play in Boca Raton when it comes to allowing new development: nobody wants neighbors less affluent than themselves. It’s OK when a doctor or lawyer moves next door, but is it the same when it’s a teacher, when it’s a nurse, or a delivery driver? It makes sense to hope your neighbors are paying more than you are for their homes because that means your investment has appreciated. Nobody wants to learn they’ve got new neighbors who are paying less. It’s not class bias, just basic math, and we’d have to act against our own interests to have it be any other way. Right? Or no?

How do we know there isn’t enough affordable housing in Boca?

When a business in Boca Raton needs delivery people it’s not impossible to get workers who live in Boca Raton. However, it’s more likely they’re going to come from one of the towns where the median household income is $30,000 per year. It’s more likely businesses in Boca are going to have to depend on people from places like Hialeah or West Palm than people who live here or on Palm Beach.

Colonade is within my quadrant, only about a mile down the road from me. My neighborhood is only a little closer to Midtown, a location where a local developer whose had offices in this town for decades wanted to build affordable housing for a change. I opposed it at first because I was thinking first and foremost about me, wanting only neighbors who are “better off than me” paying more, not anyone “worse off” paying less. I can’t say the economic rationale for that position has changed, but now I feel something in addition.

Al Zucaro enlightened me to the fact that most people born here don’t stay here when they’re young – it’s too expensive. For decades I wasn’t aware that I was part of a trend, one of the kids who graduated from Boca High and moved away. It was easier to move away to a more affordable place while we built our careers. The loyalty people feel to their neighbors, nurtured over being in the same location for multiple generations, is a little more rare here than it is in other places, places that are more affordable to stick around.

Nobody has announced yet what was going through the delivery driver’s mind as he allegedly chose our city to become a murderer in. It’s hard to rationalize what would make someone do something like that, it’s hard to find some kind of reason for it. Don’t we want to discover the reason so we can stop it from happening again? In the absence of the police or the perpetrator explaining it to us, we don’t know what was going through his head. So far nobody’s explained what he was thinking or feeling, why he’d do that to her.

As Boca gets more and more urbanized the problem can get either better or get worse. Developers can choose to build higher priced residential, discouraged from building lower priced housing by public sentiment. Alternately, developers could be encouraged by local government to build more affordable units. If a developer does have a plan to build affordable housing like Crocker Partners had in Midtown, without local government supporting it, it’s not going to get far. Minus incentives from local government, high demand and high median income create a vicious cycle where home prices only rise, hopefully not following Hong Kong’s trend. Hopefully, instead, we’re creating a community where the people who work in Boca can afford to call Boca their home too.

Do we want people who are close to us, loyal to our community, to be the ones knocking on our doors, the ones we’re inviting in? What can local government do about it, remedy the issue that developers and residents naturally want to exacerbate?

Affordable housing is mostly a false narrative of the insincere local elected official.

This is a long term observation from my decades of observing local government talk the talk but not walk the walk. Boca Raton’s elected officials are no different. When presented with the possibility of divesting the Boca Municipal Golf Course, profiteering became the main motivator. Contracting with GL Homes to build five hundred plus high-end residential homes accomplishes nothing except provide local government new money to spend on yet to be determined developments; to wit: Virgin Lines, City Hall complex, etc.. Since these same elected officials are apparently not concerned with the traffic and congestion implications caused by these new units, would it not be a better use to team up with an affordable housing organization and contribute the land to make affordable housing a reality for the greater Boca Raton area?

Food for thought, perhaps…But do not be fooled…Affordable housing certainly contributes to the community’s common good but does not contribute to the campaign coffers of the elected officials.