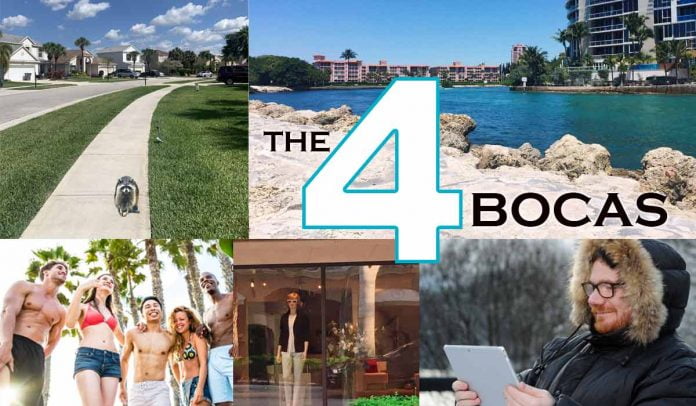 There isn’t just one Boca Raton. There’s four. They’re as follows: The City of Boca Raton, The Greater Beach and Tax District, Unincorporated Boca Raton and “external Boca” or connected to but absent from Boca Raton. I’ll explain why these Bocas are different and why these groups of people are in different places, but are still “in Boca”.

The City of Boca Raton is original Boca, but it doesn’t encompass all locations that have Boca Raton as their address. It’s a smaller geography, the eastern portion of the area that shares the name. Roughly it can be thought of as “east of the Turnpike” although there are areas east of the Turnpike that are not officially within the City, for example Boca Del Mar, Boca Pointe, Boca Groves and Boca West. South of Palmetto the City ends at Military and north of Clint Moore Road the City ends at Congress.

Over the history of Boca Raton the boundaries of the City have grown through a process called annexation. For example, the area to the north of Town Center was previously outside the City. It was a “company town” on its own created by Arvida in 1959 called University Park. In the early seventies close to 1,000 residents living there voted to be annexed into the City of Boca Raton.  Other communities have been annexed into the City since.

Some communities to the east of the Turnpike have not been annexed into the city boundaries. To be annexed is a mutual decision between the residents of the community and city government. There was some discussion of brining the communities north of Clint Moore Road into the City back in 2016, when Weinroth and Haynie were on City Council, but there hasn’t been too much talk of it lately.

The next geography that matters for Boca Raton residents, the second Boca, is the zone where residents can get the much sought after “Beach Sticker”. Residents with a Boca address who live outside this zone are shocked and dismayed when they learn they cannot get a Beach Sticker and have to pay to park at the beach just like non-Boca residents. The area that can get beach stickers has a formal, separate tax designation, and taxes residents in addition to the City taxes already paid. Its borders are more rational and include almost all of the Boca Raton neighborhoods east of the Turnpike. This includes the neighborhoods I named before that are now excluded from being within the City itself. The neighborhoods to the north of Clint Moore are not within the Beach Parks District even though they’re between the Turnpike and Congress

The cost of running two separate administrations, two separate governmental entities, is incurred upon residents for the sake a small fraction of the total households east of the Turnpike.*

Operational cost of running an administration in addition to and separate from the City alone isn’t the thing residents should be concerned about. The City and the Parks District recently bid against each other for ownership over the Ocean Breeze golf course with the intention of creating a world-class championship golf course managed by the City. Instead, after the price was driven up before the purchase, now the property sits completely unused and inaccessible by the public. One has to wonder how much residents’ tax money would have been saved if there wasn’t a fervor for the ownership between the two entities whose mission is to protect resident’s interests.

What’s really ironic about the communities who haven’t officially joined the City yet is that they almost all have the word “Boca” in the name of the community. They’re not shy about cashing in on the brand but when it comes paying the bills to keep the brand strong with they majority of us they haven’t yet joined us at the table. I can see why these communities want to keep the status quo – there’s a lot of taxes they avoid yet at the same time enjoying all the benefits those of us bearing the cost. A great deal for those communities. Why wouldn’t you want to save your cake if you can also eat it too?

The third Boca is Unincorporated Boca Raton.  Wikipedia calls it “West Boca Raton” as if that’s an official entity. But it’s not. People west of the Turnpike just use the name “Boca Raton” in their address although they’re officially outside the border of the City. The use of the term West Boca by a high school, a hospital, and a website make the term “West Boca” a useful way to describe this area among locals. Residents of West Boca include everyone north of Broward, south of Delray who are west of the Turnpike.

The rules in West Boca are different than in the City. Instead of Palmetto and Glades always running parallel, in West Boca they intersect.  It’s a far less expensive place to live tax-wise. However, services are available in the same proportion: residents have to rely on the County to provide police protection, fire protection, paramedic coverage and potable water. Comparing services has made some West Boca residents speak out, arguing that they should be receiving more.

Before I wrote this article I assumed that the County would be charging the folks who live in Unincorporated Boca more than me because the County has to provide them services that I don’t receive. But guess what? That isn’t the case. As a city resident I pay a comparable amount to Palm Beach County in taxes relative to someone in a similar home outside the City. I get to pay an extra 20% for the privilege of being able to run for City Council and a bump up in service quality (Police, Fire, Zoning etc). For an average home in Boca it comes out to close to $1,000 more per year. Leif Ahnell deserves a lot of the credit for sustaining the balances that made the extra cost “worth it” for decades. But when he retires (soon) will it be the same? Will it be the time to talk about unifying Boca under a new “head chef” then?

The fourth Boca isn’t even in one place. The fourth Boca isn’t here. It’s the people connected to this City, but who aren’t current residents of the other three. It’s people who work here, people who used to live here and people who are planning on living here in the future. It’s people who’ve got investments here, and can influence what happens here, but never have to be here at all. These are people with a stake in what happens here and often use Boca Raton to meet their goals.

The name “Boca Raton” carries weight – it has brand value. In fact the famous resort that the City grew around has recently changed its name to “The Boca Raton“, reducing its identity to what confers value, dropping completely the terms “club”, “resort” and “hotel” that describe what it provides.

When a business or organization that’s in Boca Raton uses the name it’s not fair to criticize them. No matter where someone is, it’s most honest to use the name of the locale you’re genuinely within. It’s less honest, for example, if a business or community in Deerfield or Delray uses the name Boca Raton or even the word Boca. Right? If you’re dealing with a business or organization that has the term “Boca Raton” as part of its name then you should be able to trust that they’re your neighbors, commercial tenants at a minimum, right?

Is it just peeving me or is it thievery?

To me, since I do marketing, I’m very sensitive to semantics, connotation, and allusion in identity. As a resident and property owner in Boca Raton it’s more than cringey when I discover a business who doesn’t have a Boca Raton address using the term “Boca Raton” in their name. To me, it’s a dilution of the value I’ve invested in and they haven’t, a dishonest leeching onto something they’ve got no right to and by doing so they subtract value from all of us. To discover an organization is using the name Boca Raton but not limiting itself to helping ONLY Boca Raton businesses or residents is disappointing. It’s not just that we’ve got dishonesty in our midst, but in some ways it seems like we’ve got an act of theft occurring.

I’m not saying our hospital should close its doors to people who are from out of town. It’s more like I’m saying that I don’t want to check into a hospital here in Boca only to find out my doctor and room I’ll be staying in are in Pompano. No offense to Pompano – it’s just that if something is labeled one way it shouldn’t be another upon receipt. If it’s labeled “Boca Raton” then I want to know it’s coming from at least one of the first three Bocas, not the fourth one.

Are West Boca neighborhoods benefitting from the Boca Raton brand without contributing to it? People who are pro-annexing say yes. Even people who are against annexing can’t be serious when they argue West Boca folks benefit equally from the brand yet pay the least towards what the rest of us pay to sustain and define “the brand”.

Why Not One Boca?

Could all three areas called “Boca Raton”, the first three of the four Bocas, be one? Why can’t every place that uses the name and gains benefit from it be one big city? There are lots of arguments against annexing. For one it would grow City government, make Boca bigger, and necessitate more seats on City Council. Second, anti-annex residents argue, is the mathematical reality that it would dilute City resident’s vote. Where previously we, as City residents, didn’t have to concern ourselves with what people out west thought and what they wanted their tax dollars spent on, after annexing we would.

I wish I could be concise and tell you what to think about annexing, but I see the rationale of both arguments – for and against it. I have to admit that I had a stronger opinion about it before writing this article. I was pro-annexing. But after reflecting on it I can see the arguments against it more, at least from the perspective of a City resident. I can see it from my perspective, both ways, but I’m really curious about what residents of the Third Boca, Unincorporated Boca Raton, think. If you’re “out west” it would be great if you left a comment about how you feel about annexing below.

*It would be interesting to do the analysis on this cost with 2021 numbers, but that’s beyond the scope of this article.