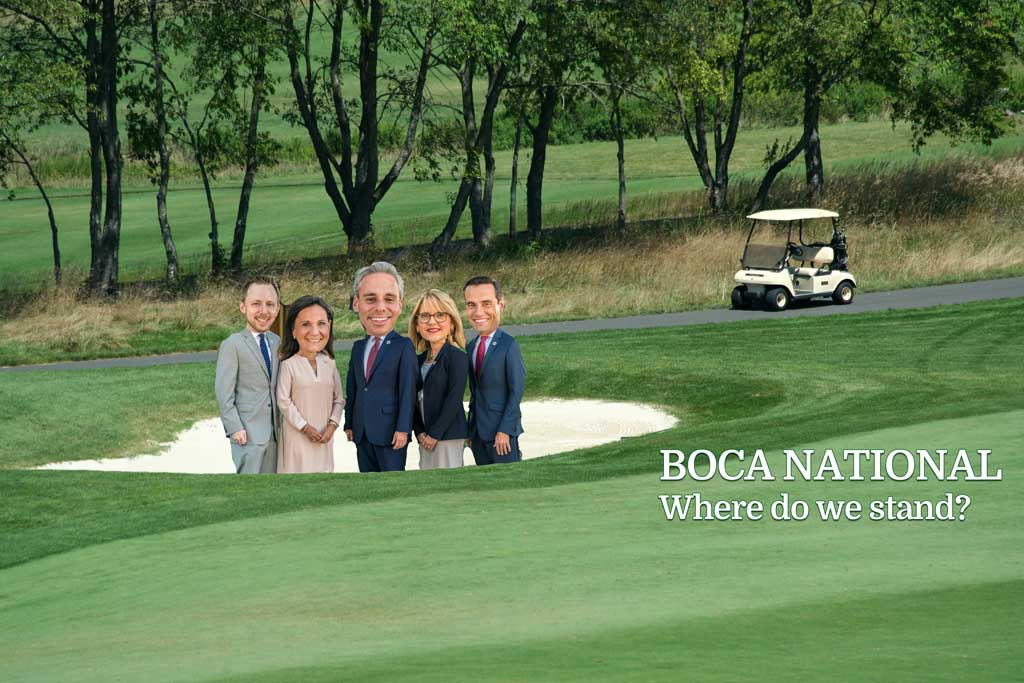 Round 2 in the match between the City and the District over Boca National was played on Tuesday, April 23 at the District’s new HQ clubhouse at Boca Swim & Racquet on St. Andrews Boulevard.

Opening the public requests, 2 citizens caddied for the Commissioners.

Rick Heard – an experienced Boca golf business professional – gave a detailed analysis (see comments in separate PDF) stating the City should be forthcoming with the funds from the $65 million sale of Boca Municipal to build the new home for Golf in Boca.

Next, it was Greg Gelonis who, last week at the City’s visioning session, suggested the City Council should contact GL Homes and open discussions to delay the closing on Boca Municipal for at least 12 months. Apparently, GL is open to such a discussion. Mayor Singer responded with blaming the District for the delays but not recognizing his, and the entire council’s lack leadership and commitment, as part of the problem in the first place.

From the Rough to the Sand Trap

At the 4/23 meeting, the Commissioners took their turns lamenting the bad ‘lie’ the District finds itself in. Commissioner Ehrnst saw the dilemma of not having enough funding to move the project forward and, rather than raise taxes, the District should only open the 18 hole course in the design. But even then, it wasn’t clear if the District could finish without City participating with funding or receiving capital from another third party source.

Commissioner Wright recognized that they’ve ‘double bogeyed’ on the costs to date, and that they still don’t have a clear picture over what costs lie ahead. She ended up supporting Commissioner Ehrnst’s suggestion, while continuing to press for a full time golf superintendent to be added now to the team in order to have additional comment on maintenance costs. In other words, bring on a greenskeeper when there are no greens to keep. Clearly, she is not convinced that the professionals who have designed the course have been forthcoming with all the costs.

Commissioner Engel was the third to recognize how deep they’re in the rough. Not enough money and no cooperation from the city nor any reasonable expectation of city’s cooperation in the future; just more questions to put the District in a bad light in a game of whack-a-mole instead of golf. Engel also announced that he had spoken with an unnamed City Council member about the proposed purchase and sale of Ocean Strand. Per Commissioner Engel, the Council person’s response was “What part of ‘No’ don’t you understand?”

Commissioner Rollins at least pulled a club out of his bag. He made a motion to get a certified independent appraisal as to the value of Ocean Strand at its highest and best use. He made it clear that he wasn’t suggesting that the District sell Ocean Strand to a private developer, but, rather to know its value for discussion with the City. Thirty minutes of pointless discussion later, the District board voted 4-1 (Erhnst opposed) to simply get the information.

Chair Susan Vogelgesang assessed the ball’s lie. She urged the public to speak at public requests in front of the City Council and make the resident’s voices heard. She planned a simple shot, “We need to get approval of the design by the City so we can go out for bids to know our costs.”

They spent an hour tinkering with answers to the questions the City presented in Deputy City Manager George Brown’s letter of April 1. Almost everything presented by City staff were operational questions. Commissioner Wright recognized at the outset —questions that could only be answered by staff discussion having nothing to do with the design of the course.

Deputy City Manager Brown quotes the City/District Interlocal agreement in his April 1 memo, “… the CITY shall be provided the opportunity (prior to approval by the DISTRICT) to review, comment on, and approve any Improvement Plan, which approval shall not be unreasonably : withheld.” Except for a few paragraphs regarding “Land Use/Zoning,” nearly everything else in the 17 page memo from staff had nothing to do with the design of the course.

Several interesting questions were teed up for the next round of play on May 28th at the joint meeting of the District and City commissioners.

Only time will tell if the City will hold to the May 28th meeting, and if these questions will be answered.