A seldom discussed, gem of a property within the City of Boca Raton designed primarily for recreational use is on schedule to receive a well-deserved polish and rehab. Only one last hurdle needs to be passed and that is the final approval by City Council.

The property, known as the Swim and Racquet Center, is located on St. Andrews Blvd. and is under the jurisdiction of the Greater Boca Raton Beach and Parks District which acquired it in 2000 at the behest of the surrounding Via Verde neighborhoods. The City then annexed the facility in 2003. The Center has a history that dates back to the early 1980’s and once housed the popular Chuck’s Steakhouse.

This past week brought the issue to the forefront as discussion at the District’s regular meeting took place and approval of the District’s plans passed unanimously at the City’s Planning and Zoning Board. Observers of the P&Z meeting received an insightful history lesson of the property, as well as a detailed description of what is to come, from local architect Doug Mummaw. Mr. Mummaw provided an excellent presentation which included design that was artfully thought out with a nod to the original architecture and intent. This story could end there by simply saying; The revamped and upgraded facility will be money well spent by the District and create a multi-use attraction we can all be proud of. However, there are other aspects worthy of discussion.

A New Headquarters for Beach and Parks

Part of the plan calls for the demolition of the old restaurant building and replacing it with a new two-story building with approximately the same total square footage and smaller footprint. The building will serve as a type of community center while the second floor will be home to Beach and Parks offices and meeting facilities that will allow for an audience of 40 people. The second floor will also be available for community meetings. This will be a major upgrade and it will replace the meeting accommodations currently held at Sugar Sand Park. With the District occupying the new building it is creating, there is a need to modify the zoning to allow for ‘government usage’.

Boca Raton’s recreational facilities, including beaches and parks, have earned an excellent reputation through the years, which is the result of the joint efforts of the District and the City’s Parks and Recreation Department. It is among the features of the City that newcomers, both corporate and individual, consider favorably when looking to relocate. For that reason, it is somewhat stunning that the current leadership of the District facing reelection has come under fire by their opposition. As reported in prior articles of BocaWatch, the attack focuses on the lack of communication between the District and high ranking City officials.

There currently exists an undertone that the communication problem is solely that of the District and it appears that this is a narrative fabricated to unseat the incumbents. It is interesting to note that the challengers to the incumbents have rarely, if ever, attended a Beach and Parks board meeting. Who are they to judge? Those citizens that do attend a District meeting would discover that the meetings are resident friendly and far more transparent than City Council meetings. Communication is a two-way street and the City needs to own up to its responsibility in that equation.

Speaking of transparency, our City Council has set a low standard for ex-parte disclosure during public hearings. The only information provided by Council, when asked, is the name of the party they spoke with. With the recent exception of Councilman Scott Singer, there is no disclosure by the others of the substance of their discussions. Of what value is that for the public record?

Our Beach and Parks District current board has represented excellent stewardship as evidenced by their efforts and outcomes accompanied by honest and open transparency. The attempt to unseat the incumbents is a political maneuver that could very well upset a reasonable ‘check and balance’ system now in place. The saying goes ‘if it isn’t broke, don’t fix it”. The part that seems to be broken lies beyond the Commissioners of the Beach and Parks District.

Check out the incumbents’ Facebook pages for more information! 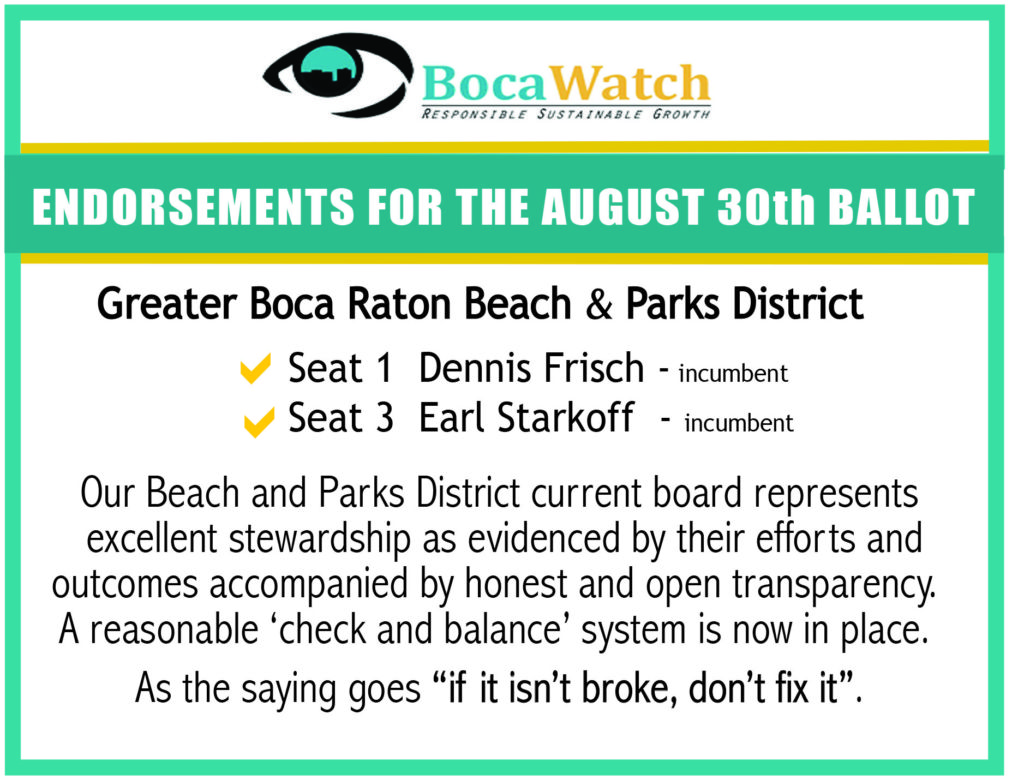