Months ago, BocaWatch raised the question of how vacancies for the positions of Mayor and/or City Council members are filled.

Currently, vacancies are filled in a most undemocratic way; a vacancy for Mayor is filled by the appointed Deputy Mayor ascending to the Mayor’s seat for the remainder of the Mayor’s term.  A vacancy created by the deputy Mayor’s ascension, or simply by a vacancy at the council level, is then filled by the majority vote of the remaining four sitting City Council members.

Can you think of anything more undemocratic?

With the passage of the ‘vacancy’ referendum vote on August 30th, city residents, in the future, will fill a vacant seat by special election if the next scheduled city election is more than 90 days after the Mayor/Council members resigns.

In its August 18th editorial, the Sun Sentinel opines for the defeat of the ‘vacancy’ referendum arguing that this referendum is simply a politically motivated effort by Councilman Scott Singer, who, it argues, is only interested in challenging Mayor Haynie in the March 2017 elections.

The Sentinel’s argument is a very shallow political analysis that never addresses the merits of Councilman Singer’s arguments; a politically motivated editorial missing the main point, to wit: Elected officials should be elected by the residents to the elected position they hold.

It is widely believed that Mayor Haynie, while running for re-election to her seat for a second term as Mayor, will, if re-elected, under the resign-to-run law, resign her seat effective November, 2018, in her run for County Commissioner Abrams’ county seat.  Commissioner Abrams is term limited after his current term and Mayor Haynie clearly is interested in elevating from the city to the county.

The Sentinel calls this mere ‘speculation’.  Even if the ‘speculation’ characterization is correct (BocaWatch does not believe that), the possibility can, nonetheless, be avoided.

Rather than for me try to make a counter argument, printed below, in its entirety, is Councilman Singer’s letter submitted to the Sentinel in response to its editorial endorsement.

Shame on the Sun Sentinel for opposing the people’s right to vote and for rejecting a basic issue of democracy through pure speculation as to personal motivations and trumped-up cost concerns. The Sun Sentinel’s editorial position is wrong on Boca Raton Ballot Question 1 and the reasons that underlie it. Moreover, it is irresponsible for the board to guess at them.

Question 1 would simply provide the right of the voters to fill vacancies in the mayor and city council seats, instead of appointments by the council without resident input — even to fill up to two-thirds of a term. The City Council unanimously placed this question on the ballot at the urging of dozens of residents who spoke at a public hearing. This broad support is not a mere indulgence of anything but free elections.

The sense of this good-government measure was shown recently in the Village of Wellington, where its council had to deal with 35 applicants for a council vacancy. After this undemocratic process took multiple meetings to resolve, its council proposed a nearly identical charter change to Boca’s Question 1, which is also up for voter approval. Wellington’s council — having just lived through the alternative — also unanimously supported special elections.

The editorial also suggests that Mayor Susan Haynie may abandon nearly half of the term she currently seeks to make a separate run for the County Commission only a year later. Her pursuit of another office would leave Boca without an elected mayor for 17 months. If this actually happens, it is yet another reason that the voters should be able to choose a successor mayor and replacement council member, instead of having handpicked appointees for so long.

In addition, the editorial uses an incorrectly high figure for costs but ignores the benefit to democracy. Had this measure been in place over the last 30 years, the vacancies that occurred would have resulted in elections simultaneous with others — as Question 1 is designed to do — at literally zero cost to residents.

The real cost to citizens would be the selection of city leaders by establishment elites, instead of an election by voters at the ballot box. Residents should say YES to their right to vote and approve Question 1.

BocaWatch believes that this referendum question NO. 1 is the most important item on the August 30th ballot.  Its passage is the only way for residents to continue taking back our city from the ‘developer friendly’ City Council of the last decade; a last chance to insure that the residents have the opportunity to elect ‘resident friendly’ voices to the governing body of this city, Boca Raton.

On the question of the City Council’s compensation increases, BocaWatch did endorse an affirmative vote on referendum No 2.  This was a difficult decision and has had considerable ‘push back’ from many of you, the residents, who argue that the current City Council does not deserve to be rewarded considering their incredibly bad performance in preserving the character of Boca Raton against the unfettered overdevelopment of the city both in the downtown area and now along the western reaches of our city.

BocaWatch struggled with whether to recommend a ‘yes’ vote over a ‘vote your conscious’ or outright ‘no’ vote on this question.  In the final analysis, BocaWatch believes that compensation increases are needed for the city to emerge into its future.

As soon as March, 2017, voters will have the opportunity to place new people into the highest elected levels of Boca Raton; levels that directly affect policies leading to the city’s future.  The commitment to lead is considerable and reasonable compensation encourages new voices to emerge.  To punish these emerging voices based upon past bad behavior of the current crop and former council members is understandable but limiting.

Of course, once in the voting booth, all outside opinions are left outside.  You, the voter are left with your basic beliefs and your sense of right and wrong. The residents will speak and their voice will be heard.  That is a good thing; that is how the process works best.

BocaWatch is proud and humbled for having the opportunity to help shape your thinking and the city’s future.  This is a serious responsibility and we take it seriously.

Thank you for your continued support and stay tuned for our next series of improvements.  New technologies, new debates and continued political analysis designed to raise the residents’ voice to a heightened participatory civic order.

Your vote is your voice.  Let your voice be heard on August 30th 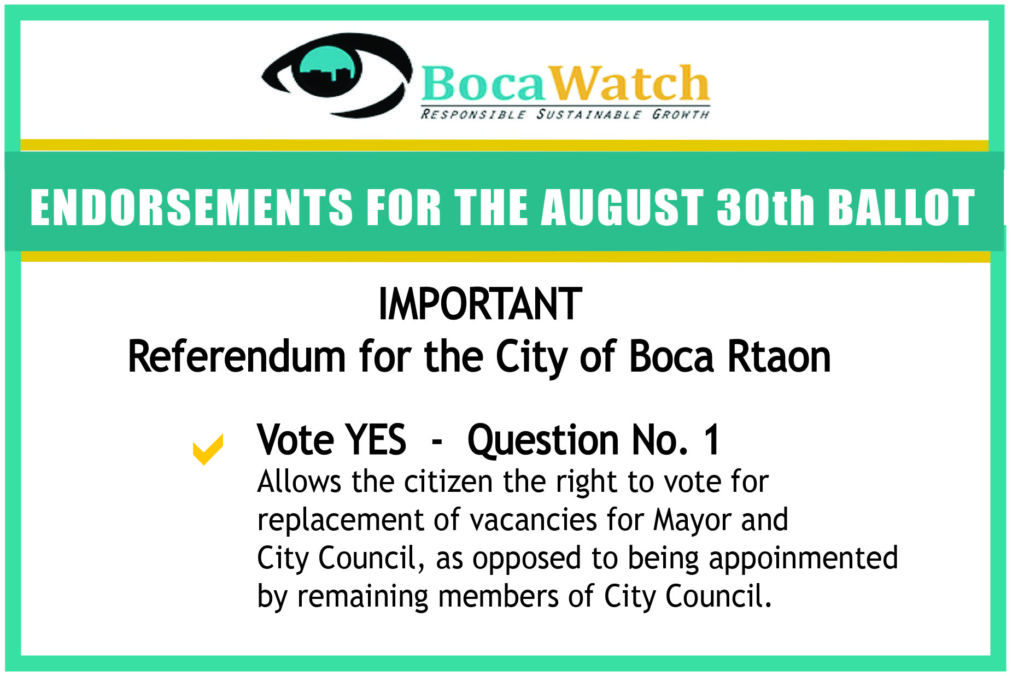