Remember last year?….The City Council approved a variance for the property at 2500 N. Ocean Blvd. allowing a sub-standard lot to be approved for development of a 4 story, 10,000 sq. ft. residence on the ocean side of A1A.  The City Council’s action was approved with a 4–1 vote. Councilman Jeremy Rodgers being the sole dissenter.

City staff, in its presentation, stated that the variance request met all city code criteria and recommended approval.  Staff, however, failed to provide any substantial justification as to how they arrived at their conclusions; how they justified that the applicant created a situation for which relief was being sought.  BocaWatch provided a recap of the December 8th hearing (see Fights worth Fighting, December 14, 2015.)

The public’s response was virtually immediate and very loud!

The four approving votes, Mayor Haynie, Councilman Singer, Councilman Weinroth and Councilman Mullaugh did not take the one corrective action available to them at the time….any one of them could have filed a motion to reconsider at the following City Council meeting to revisit the issue and allow for a reversal of this incredibly harmful decision.

There were two main arguments offered supporting the Council’s action:

Fearing the developer’s threat of legal action is bogus and should not be the criteria for our elected officials to act….There has to be a line in the sand that defines who we are and what the city of Boca Raton stands for.….

Our pristine beach is that defining moment….no longer!

The question asked by the residents then was: When is a fight worth fighting?….The beaches have been pristine for decades and now, with this action, other dominoes are beginning to fall….others are already lining up to build on the ocean side of A1A  because of the Council’s ill-advised action.

This is all history…

Current concern is that the assurances conveyed by the Mayor and others on the Council that granting the variance was a defensive act that would have little impact to the applicant’s ultimate goals of issuing the building permit.  This position is now, and was at the time, bogus.

Last week, (not so) conspicuously posted on the site was a NOTICE TO PROCEED (actual post) on land at article end) from the Florida Department of Environmental Protection; to wit: the permittee, Natural Lands, LLC, is “hereby granted final authorization to proceed with construction or activities authorized by this notice.” 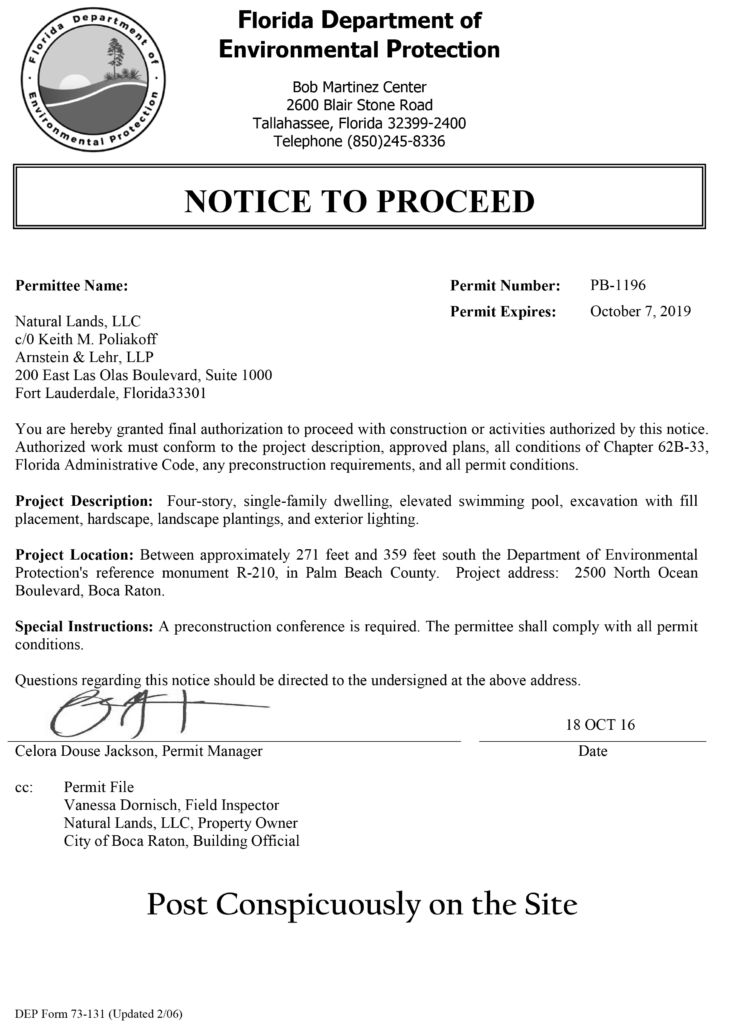 A complete review of the Environmental Protection file can be found at the link below. Use “Public Oculous Login” to gain access.

What is critically interesting in a review of this file is that the most critical obstacle for the applicant to overcome before the state’s issuing this NOTICE TO PROCEED was getting the city of Boca Raton’s zoning approval; an approval given unequivocally with the Council’s granting of the variance.

Mayor Haynie’s assurance that the variance was merely a formality and that application to build on the ocean side of A1A would not be approved by other agencies was completely wrong.

The question now raised is how was the Mayor and the Council so wrong?

What we may now have is a classic example of the horns of a dilemma; two equally bad outcomes….

If city staff did not provide the City Council with an accurate analysis of the import in granting this variance as it relates to the ultimate outcome of issuing the notice to proceed, than there is a real question of competence.

In the alternative, if City Council was made aware of the import in granting the variance but proceeded anyway, then there is a question of misleading the residents.

Neither of these is acceptable.  What is reality now, however, is that thanks to our City Council ill-advised decision, there seems to be no other obstacles to prevent this building project from moving forward….

Hence, what we have here is a vivid, real life reason to replace those elected officials that are ‘developer friendly’ with people that have a ‘resident friendly’ voice, a voice that puts the interest of the resident in front of the special interests.

Your vote is your voice; let your voice be heard….

City Council elections are coming…get out and vote in March, 2017 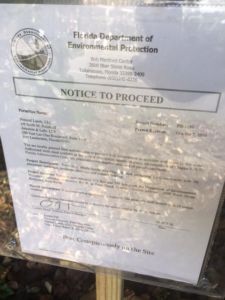 What was suppose to be “conspicuously” placed,  was small, low and behind shrubbery.  It was a miracle it was found by an area walker.