On November 15, 2016, the Fourth District Court of Appeals in West Palm Beach issued a two sentence order denying the appellants’ July 6, 2016 petition for Writ of Certiorari and October 14, 2016 request for Oral Argument.

This appellate order effectively brings to a final denial Boca Raton’s action approving the site plan for the Chabad at 770 E. Palmetto Park Road; to wit: a complete vindication for residents who argued that the City Council acted improperly in its strained approval of the building permit application.

Congratulations are extended to Mr. Dave Roberts, who waged this valiant fight at both the Circuit Court and District Court to victory; a major demonstration that one resident can fight city hall and win…..outstanding!

Below is the Appellate Court’s final order: 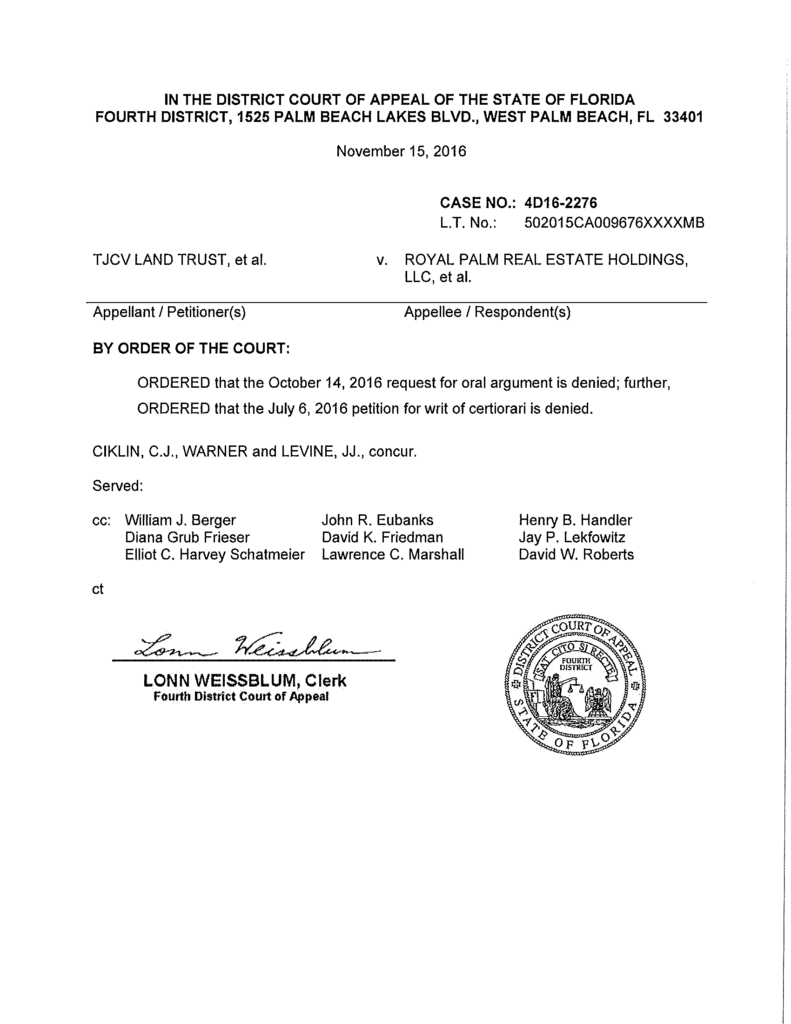 A complete review of the underlying circuit and appellate court records can be found at the district court.  The style of this case is:

In announcing this victory, John R. Eubanks, Jr., attorney for Mr. Roberts, issued the following comment….”The 4th DCA just denied the Chabad’s Petition for Writ of Cert.  Based on the fact that all 5 Judges approved and there is no written opinion, it would be very hard to appeal the Order to the Florida Supreme Court.  Instead, the Chabad will need to start all over again with a new application.”

Although this Appellate court order effectively brings closure to the legal challenges in the state court, there still remains the Federal Court action brought by other concerned residents challenging the constitutionality of the City’s underlying approval process.  The Federal Court action remains active and is now entering the discovery stage where sworn depositions are expected to uncover the inner workings and communications between City Hall, City Council members and the applicant.

Federal court, magistrates, judges and subpoena power are powerful tools to uncover truth….Discovering truth often leads to serious consequences for those that will be in the proverbial hot seat….this is sure to become even more interesting.