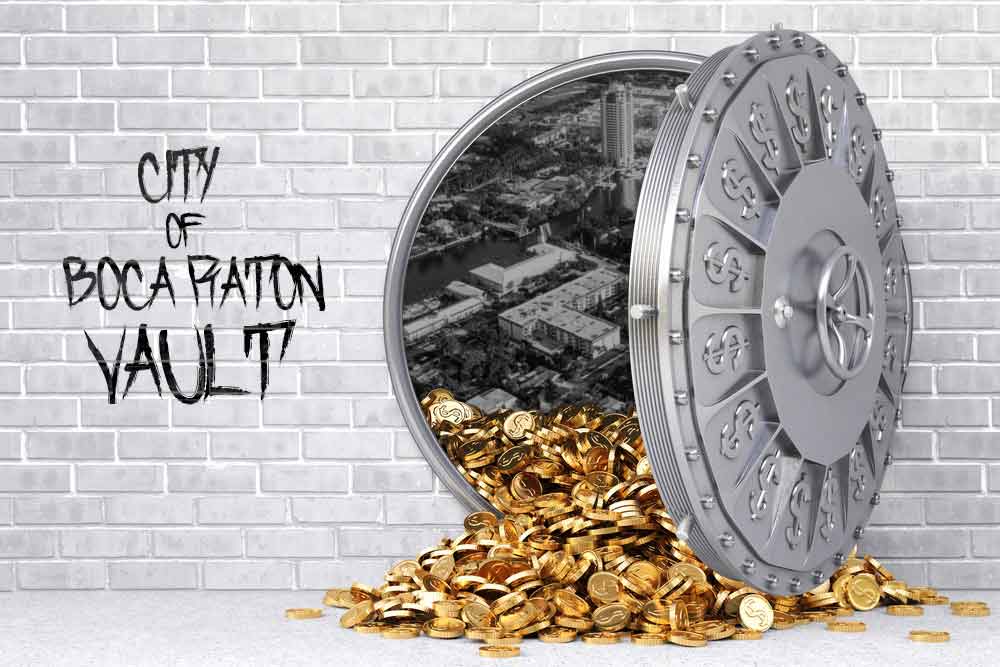 This article is based upon information contained in the City of Boca Raton’s Comprehensive Annual Financing Report (CAFR) for the year ended, September 30, 2017: the latest audit report to which a link is provided at the end of this article. The 2018 CAFR is anticipated to arrive sometime in the next several weeks.

Reported by the city are reserves that are deemed excess in the range of $224,000,000: a staggering amount.  I am not referring to recorded reserves that are either restricted or that are necessary and needed for ongoing operations of the city, such as for debt service or capital projects.  Also, this amount does not include the future sale of Boca Municipal Golf Course for $65M that could potentially increase the excess reserves to just under $290 M.  This amount, or a portion thereof, can be made available for whatever purpose the City Council deems appropriate. It is an amount that can be made available for projects the residents want, projects the residents demand.  After all, this is the residents’ money; it belongs neither to the administration nor the Council.  It is money from the resident, for the resident.

Demanded here is for the City Council to schedule a public workshop to present the 2018 CAFR so that the residents can see what reserves are available, see what is the prudent amount of reserves needed to protect the city, and maintain the city’s excellent bond rating. 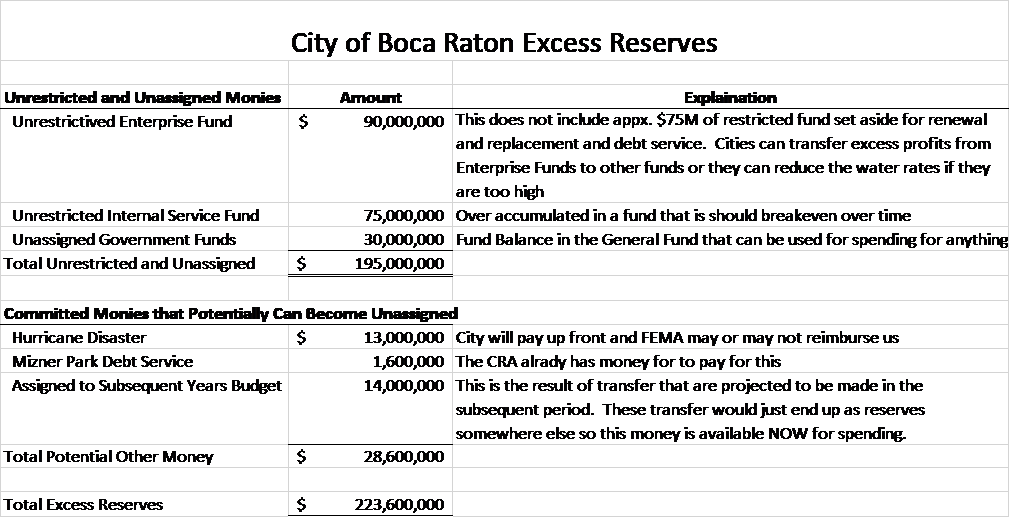 Let me begin by stating that the City is not doing anything technically wrong with its excessive reserves.  What I am saying is that the reporting of these reserves is misleading and difficult for a resident to understand.  This staggering amount of excess reserves could be used for items demanded by the public, and it would not impair our high bond rating, as ratings agencies take into account all of the economic characteristics of the issuer, not just reserves.

In fact, I am not even sure why we keep issuing bonds when we have reserves to pay for the needs of the city  Who makes out?  The bond counsel, the underwriters.  Not the taxpayer.  We incur high bond issue cost and interest which are costly to the city.  I also don’t understand why we are accumulating so much cash.  We have all this cash and have hardly earned any interest on it over the last 7 to 8 years.  Perhaps someone can explain this to me?  But I digress… a subject for another day!

Here are some examples of some resident-friendly initiatives that some of the excess reserves could be used for:

The city administration is reporting reserves that are spread out in multiple funds: funds that could potentially be used for these ‘resident-friendly’ initiatives.  There is no reason for the city not to use a small amount of that money for the benefit of the residents.  Let’s break down one example: the Internal Service Fund.

The easiest, obvious and most readily available funds could come from the unrestricted $75M in the Internal Service Fund (see P. 28 of the 2017 CAFR).

This is totally wrong.

The Internal Service fund is a fund that should break even or come close to that over a long period of time if they the city was charging back other funds for services they provide.  The truth is, the administration’s practice is to keep charging other internal city department funds more than what it costs to operate those funds and, consequently, the city has accumulated $75M in this unrestricted reserve fund.

The revenues allocated to the Internal Service Fund have been overestimating the cost to run those activities.  For example, in 2009, the unrestricted reserves in the Internal Service fund was a mere $19M.  It has increased to $75M today. Included in the $75M is a relatively new internal service fund for retirement sustainability which has approximately $25M.  These funds are unrestricted and do not even represent an internal service fund, as they do not have costs which are allocated back to other funds. The insurance premium tax collected is transferred directly to the police and fire pension fund and does not impact the city. The city makes its required contributions to their pension plans, so there is no reason to have this fund. The fund was created from amounts transferred from the general fund and only represents reserves which have been reallocated.

During the fiscal year 2017, the City recorded transfers from various funds to the internal service funds to cover the cost of capital additions. Why would the City keep such a large amount in reserves and then transfer even more money to the internal service funds? Why do we keep overcharging the other funds year after year?  If the city policy was to break even in this fund, then that $75M would not be sitting there. For comparison the City of Fort Lauderdale, which has a much larger tax base, is reporting $30M in its unassigned Internal Service Fund Balance.

The city could do a lot of what the residents are asking for with $75M.

THE RESIDENTS ARE BEING OVERTAXED

The City Council, our elected officials, have the obligation and duty to review these practices and policies; the residents have the right and expectation to be informed.

People don’t want their money wasted — nor their desires and demands ignored.

The 2018 CFRA report is due to be released shortly.  A public workshop needs to be scheduled to consider what the appropriate reserve policy is and to determine which, if any, alternative practices should be implemented.  The City Council needs to consider the current policies: policies that allow the use of these excess reserves.

As can be imagined, this material has been a compilation of research by a team of contributors.

Of course, it is subject to correction, criticism, etc.  I welcome the opportunity to be proven wrong on the article in its entirety or any of its parts… in a public and transparent manner.

Elected officials, whether the City Council, or the CRA, owe this explanation to the residents of Boca Raton.

What is the rainy day that we are waiting for?

Click here to view the PDF version of the City of Boca Raton’s Comprehensive Annual Financial Report for the year ended Sept. 30, 2017