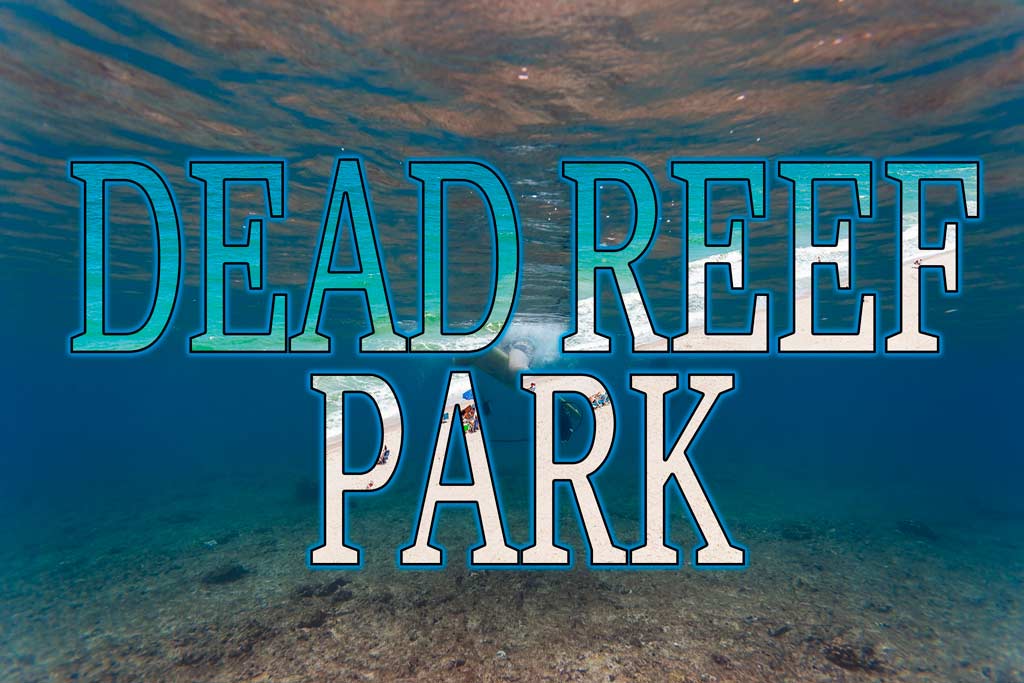 Red Reef Park is a dishonest name. It used to represent what was there, a beautiful natural reef. Don’t bother coming to it if you expect to snorkle a reef – there isn’t one there. Boca’s decision makers collectively choose to kill it. There was a reef. Now it’s dead. We should be honest about the name. Maybe we can’t because of some “rat’s mouth” curse. We shouldn’t be calling it Red Reef Park because it isn’t even red any more like it was. Now we should all take in a collective breath, try honesty out for one brief moment and call the place what it is: Dead Reef Park. Shame on us.

People come to Boca Raton’s beaches expecting to snorkle a reef right off shore. They’ve got this expectation because we’ve got a park named Red Reef Park. It’s natural for people to expect a reef to be there. But when the get in the water they find something else: large boulders dropped offshore in an attempt to replace what was there. They find a man made collection of artificial objects set off shore that’s far from deserving the label: reef. It’s some rocks, not a reef. There’s some natural rock exposed still on shore too, and maybe folks can be told that’s the reef. But that’s not what the park was named after, the reef that used to be there.

Those of us who snorkeled there before the reef was killed remember how magical it was. We remember the reef that was once there. It’s nothing like that now. I remember being told, in school, how coral took hundreds of years to grow. Boca people had giant corals we could swim out to, ones still growing back then, at Red Reef. I wonder if they bother telling our kids about the corals still. After what we did to those old magnificent coral, why bother?

It’s all been buried. The decision to pump sand from far off shore, using dredges, onto our beaches, was what covered it up. Now it’s buried and what once lived there, clung to it’s megaliths and needed homes along its ledges is gone. So many species, so much onshore habitat, such a natural wonder at our feet. Gone. We saved our beaches, but we destroyed our ocean in order to do it.

Don’t get me wrong, you might have a chance at seeing a lot of fish if you go on the right day. The rocks at Red Reef Park do attract sea life and it’s a wonderful place to introduce people to snorkeling.  But the sad fact is that the fish gather here because it’s one of the only places they can go. All the rest of the habitat that used to be here is covered by sand with the exception of these few man-made boulders. Sure the fish gather here – this is all there is now.

Some small patches of red coral have taken root on these boulders. As you’re swimming around them imagine them being 100 times larger and stretching along the length of the park, right off shore. Imagine a offshore habitat 10,000 times larger and more diversity in any one of its 10 yard squares than we see off our “restored” coast now. That’s what we had. That’s what we traded for fat beaches.

So if we’re serious about traffic and we don’t want Airbnb renters to expect a rewarding day snorkeling at the beach, why mislead them into thinking we’ve actually got a real living reef? Why trick them into thinking we’re people who care about their ocean in front of us? Why do we keep pretending we’re people who care anything other than our property values and our feel-goods? Let’s be honest and call something more accurate like what it is: People First Park, Wide Beach Park,  Sterilized Shores, “Saved” Shores Park, or simply what it is: Dead Reef Park.

The Exhaustion Of Fighting To Save Green Space In Boca