Home Community The Reef that Used to Be There 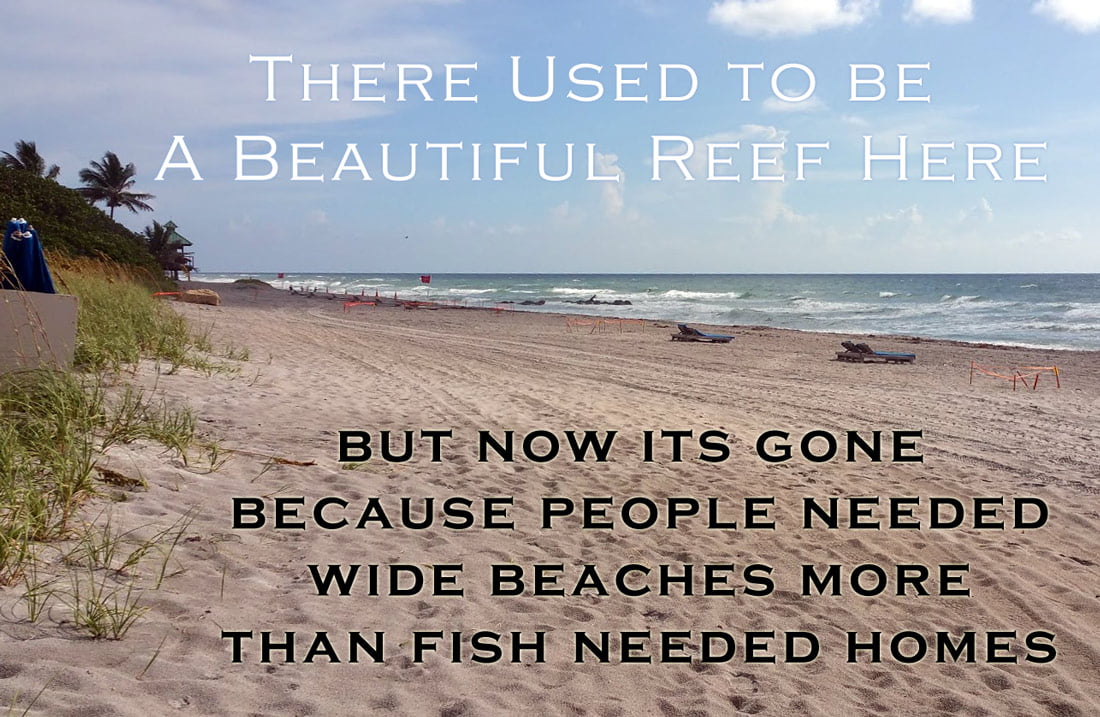 In front of Red Reef Park, only a few steps into the ocean, there used to be a magnificent reef. It’s not there at all now, at least not where you can see it. This reef was very beautiful, had so much life growing on it and swimming around it, it was one of the most stunning places to snorkle. But it’s all dead and buried now. 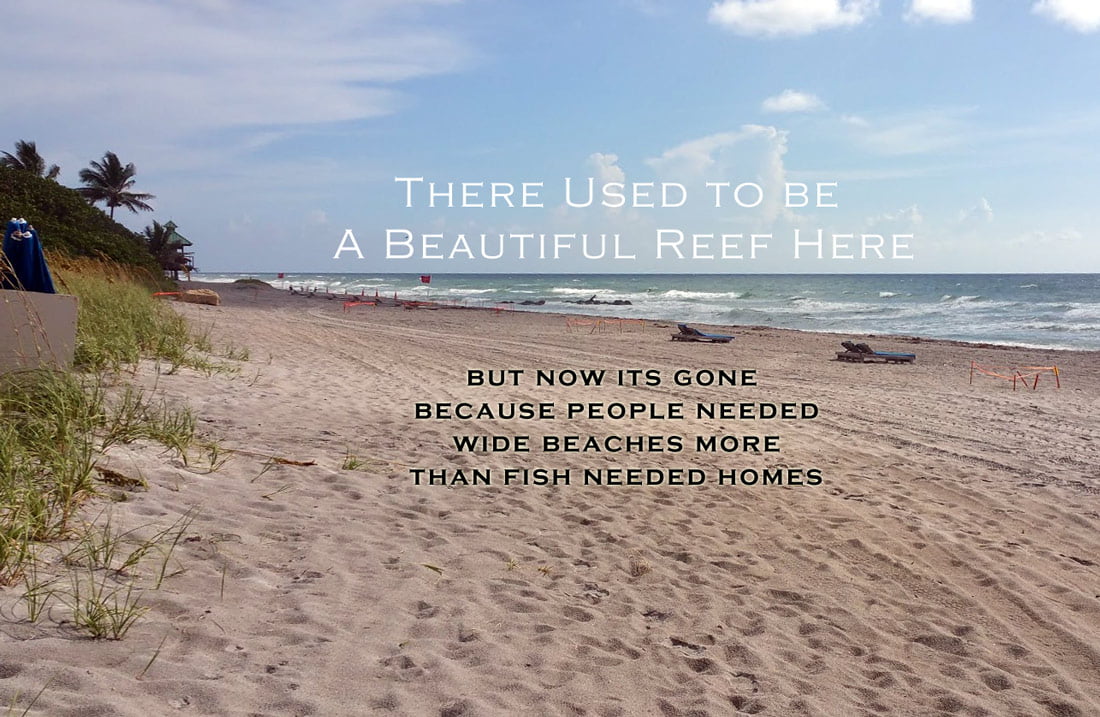 The reef that the Park Red Reef was named after was really beyond words, but I’ll do my best to describe what it was like.

The reef was a series of large, squared off boulders, each about as wide as a double lane road. They were huge, and the corners of them were squared off, so they appeared like a long line that could have been man-made, like they were dropped there, but they were massive. Under some there were ledges and dark caves that served as hiding places for anything large. Between some were gaps, sometimes 8 to 10 feet deep. They were only about 10 or 20 yards off shore, so for kids like I was in the late 70s, it was easy to get to and snorkle. Some of the rock structure still can be seen where the water meets the land, in front of the lifeguard stand closest to the entrance.

There were all sorts of colorful things growing on and around the reef. There were purple sea fans and sponges. The red coral that gave the reef it’s name coated the surface of the boulders wherever it could. The green sea plants grew in hundreds of hues, patterns and shapes. Long grasses, tiny nodules, and fuzzy hair algae waved back and forth with the waves. When I swam the reef I remember seeing a large brain coral growing, and recalled how Gordon Gilbert said how those kinds of coral took centuries to get so large.

Amazing displays of marine life were only steps away.

The fish and sea creatures that called the reef home were diverse. The same can be seen if you visit the reef south of the inlet, out as far as the lifeguard bouy, 50+ feet off shore. Red Reef had that volume of marine life just steps away. Not just tens of fish, but often thousands and thousands.

There were giant clouds of baby fish, tiny Sergeant Majors, small little rainbows in the thousands, all looking back at you as you marveled at them. There were big parrot fish, bright blue and pastel buck tooth grazers. They’d be chomping on the algae stuck to rocks all around you, filling the water with the sound of their teeth scraping against the rock to remove the algae they ate. There were some Moray Eels and barracuda, but you knew they wouldn’t mess with you unless you got too close or messed with them. I remember pressing myself close to the reef, up against the wall of stone that faced out into the depths, watching a manta ray cruise by, shocked by its proportions. Sometimes there were turtles and sometimes octopus. You could always count on seeing something different, something new and wonderful that you hadn’t seen before. For many young people growing up in Boca, this is where they fell in love with the ocean, the gateway to knowing it’s treasures, but now that gate is closed. Many won’t have the same opportunity to fall in love with the ocean as I had.

If you mention Red Reef to locals, and ask them if they remember the reef, many say “yeah, those boulders they dropped out there” not knowing there was ever anything more there. People don’t realize that those boulders were put there to compensate for something wonderful, something that’s now lost.  They don’t realize that under the sand there’s still those rock formations, waiting some day to be uncovered and reclaimed by marine life.

The reason the reef has been covered over is dredging, beach restoration. The city made the decision long ago to prioritize having wide beaches and fighting their erosion over preserving the marine habitats. Sand is sucked from off shore and pumped back on to the beach regularly. This covers the reef at Red Reef due to it’s intended effect of making the beach wider for the entire coastline of Boca Raton. Boca isn’t the only city who does it – it’s seen as a necessity to protect property, people’s homes. In some cities to the north where restoration isn’t invested in, coastal properties have suffered badly. Plus having no beach is a bummer, face it. It’s nice to go to the beach and sit on sand instead of rocks.

Is there a solution to restoring the reef, some kind of middle ground that facilitates restoration too?

Unfortunately the coastal water flows steadily in opposition to the farther Gulf Stream. This means sand pumped in one place will eventually migrate south. The sand doesn’t really stay put that well like the old sand did because it’s a different texture, not as sticky. We used to have sand that was mostly shells, now it’s more fine silica particles. So the new beach erodes faster than the old one.

If the reef ever stands a chance of restoration, having the sand removed and marine life returning to it’s many nooks and crevices, then the only solution would be one that uses the power of the water to keep the sand where it’s supposed to be, yet create enough flow around the reef to keep it clear. This may be able to be done. It’s at least worth having the city consider. If there is a way to have the restoration continue while restoring the reef, that should be investigated.  We have a perpendicular flow to the coast. We may be able to use that energy to keep the sand where we want it, yet expose the reef yet again.

Watch this video about a hydrologist whose theories on water flow allowed communities to manage their river erosion problems. Maybe we could do better?