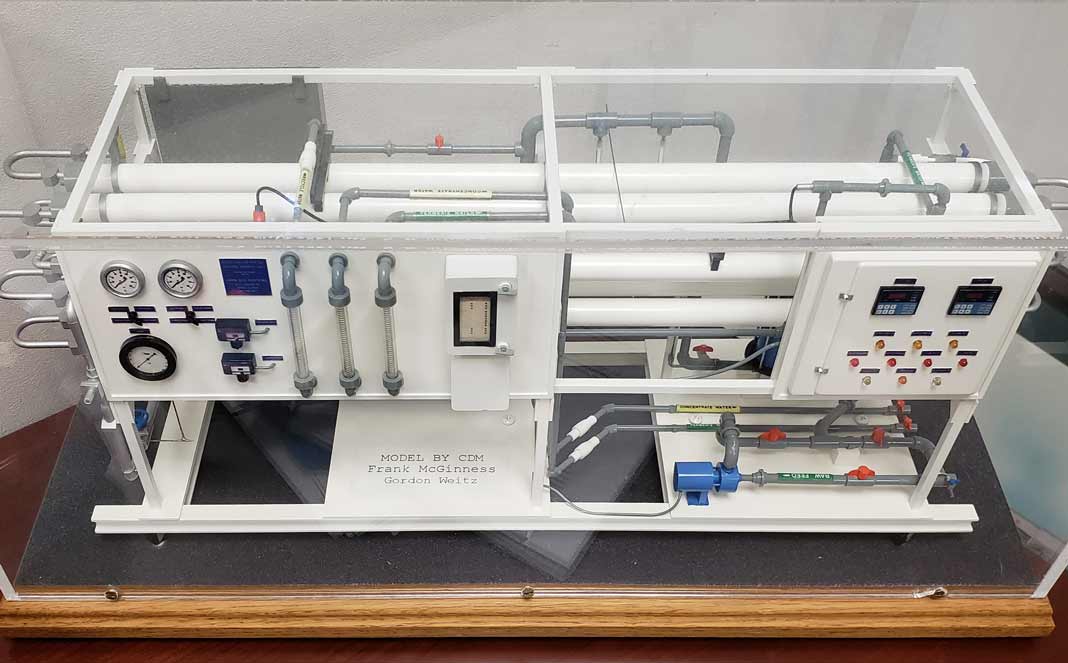 In Boca Raton there’s a Water Plant that serves our city its potable water, water that’s suitable for drinking. The 160 member staff and multi-million dollar technology work hard together each and every day to supply a resource we depend on. They do an amazing job over there, not just with the drinking water, but also with treatment of the other end of the service: wastewater. Our City has much to be proud of because of the work done by our Utilities crews. We should also be grateful for the decisions made by elected officials, over the last couple decades, that allow Boca Raton to be at the forefront of cities solving problems thoughtfully.

Boca Raton’s population is seasonal. If you’re lived here through a few summers you’ll probably notice the traffic gets a lot thinner compared to the winter. The number of people using water has been peaking at around 130,000 occupants each year. This includes both residents and guests: people living here, working here and visiting us. Our Water Plant has to produce enough water for all of our domestic use every day, 24/7/365.The EPA mandates the quality of the water as safe to drink.

In 1992 the City was serving 445 gallons of drinking quality water, tap water, per day per person. Try forcing yourself to drink one gallon of water per day – that does take some effort to keep on top of. All of the rest of that drinking quality water is still being used by us today in other ways. Most of that per-capita consumption was being used for landscaping purposes – as sprinkler water to irrigate the lawns in our homes and golf courses. Some of it went to cleaning. Since the late 90s, due to a program called IRIS that recycles the water to be re-used for irrigation, our demand for potable water has dropped to 248 gallons per day.

Dropping our water consumption makes serving clean, safe water less costly. That’s one side of the coin that’s a big deal. It also matters a lot for our ecology that our water use dropped. For every gallon of water we use almost half of it still becomes wastewater. All across Florida the math is the same: the more wastewater communities have to treat and discharge the worse our toxic algae problems become. The less we consume the less we’ll have to discharge and the less we’ll be contributing to the toxic algae problem, the less we’ll be giving the seaweed and algae what they need to multiply.

Boca has 52 separate wells around the city where the water we use originates. 37 of those wells are west of I-95 and none are east of Boca Raton Blvd. (2nd Ave/City Hall). Drawing the water from the west more than east reduces its salinity. If you look closely you’ll see these wells around town. One that is easy to spot is just east of Don Estridge on the south side of Spanish River Blvd. It’s tucked back in the bushes and only accessible from a service road, but it’s back there along with 4 other wells placed in that area 5 years ago. The water is pulled from deep sources, aquifers that don’t mix with our surface water table. According to Chris Helfrich, Director of Boca’s Utility Services Department, nothing has ever been found of concern in the water from these wells that would prohibit them being used. 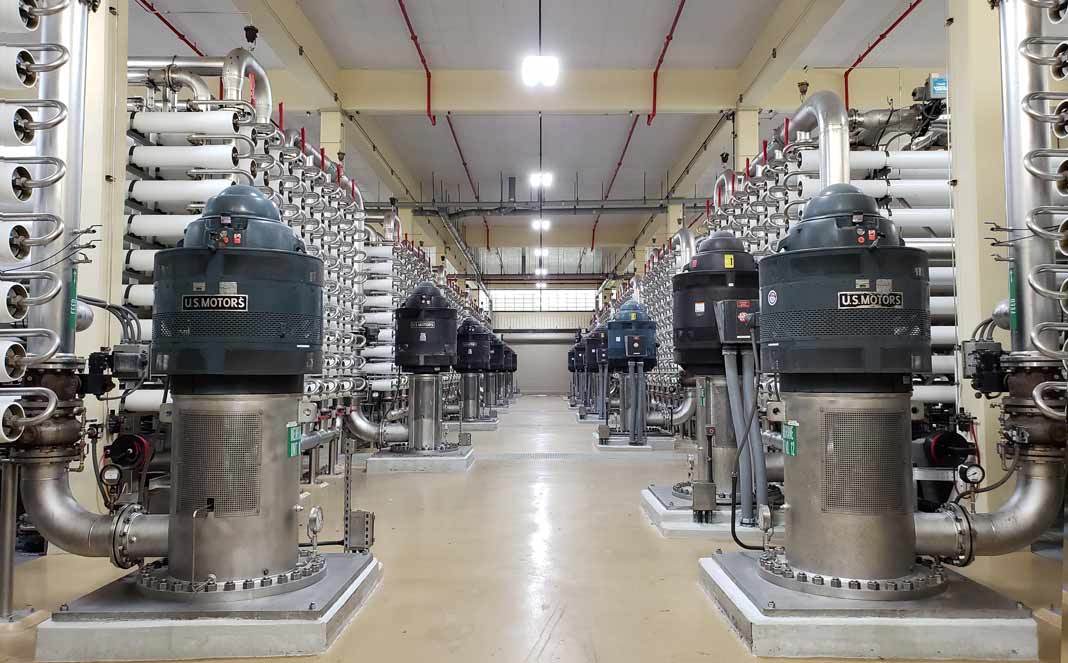 Chris runs the Water Plant and gave me a tour all around it, answering all of my questions, justifiably proud to be in charge of such an amazing operation. I asked him what prepared him to do this and what it’s like to be in his role. He said:

Specifically, I am an environmental engineer and a licensed professional engineer (PE) in the state of Florida. In addition, I have a Master’s in Business Administration (MBA). Being a director of a utility system requires the technical and business knowledge to operate effectively. As a business, we need to develop a rate structure, identify capital improvements, meet regulatory requirements and meet the demands of the customers.

Water is pumped from source wells to the City’s Water Plant. It’s treated in parallel using one of two methods: either reverse osmosis or a lime softened gravity feed. This basically means they force it through high tech filters and use a more traditional “sand” system of cleaning the water for drinking. Right now the City achieves the suitable chemistry needed by combining the RO and softened streams at a 2 to 1 ratio. Before there was reverse osmosis technology in place almost all drinking water was only lime softened and filtered.

After filtering the water is treated with chlorine. Our Water Plant generates it’s own chlorine from salt so we don’t have to worry about big trucks of poison chlorine gas on our streets coming and going from it. Chlorine is necessary to disinfect the water, to make sure it doesn’t have bacteria, viruses and parasites.

Is chlorine good for you? No. Are the byproducts of it’s addition carcinogenic? Yes. But we can’t do without it. If we didn’t add it then the water would be more unsafe. Even the simplest, least expensive water filters remove chlorine and it’s byproducts pretty well. As long as they’re tested and certified as safe to use by some independent authority they’re highly recommended. If your refrigerator includes a water dispenser then it probably has a filter trapping most of the chlorine already, a filter you have to change regularly.

If you’re a Boca resident you’ve probably seen the Water Reports explaining the quality of our water and its chemistry. The EPA has stringent guidelines for testing water and proving it is suitable for consumption. Chlorine and chlorine byproducts are among the compounds tested and required to have concentrations that aren’t too high, but aren’t too low as well. Some chemicals that might end up in water are dangerous. You never want to see them in the water: things like pesticides, herbicides and industrial waste. The water plant has chemists and engineers working hard to make sure that quality is maintained through testing and administering to the technology. Their excellence and dedication has a direct impact on our health in ways we shouldn’t take for granted.

There’s been controversy over the logic of adding fluoride to the drinking water. While studies have shown it be beneficial for the health of teeth, some credible studies claim fluoride added to drinking water causes cognitive impairment, and negatively effects neurological development in children. Unlike a majority of our neighboring cities, Boca Raton decided to stop adding fluoride to the water altogether. We have trace natural amounts on the order of 0.15 ppm but that’s 5x less than to the target level of 0.7 ppm other cities serve by adding it to their water (Deerfield) (Delray).  Debate over whether to add fluoride or not was as recent as the 1990’s. We can thank the utilities experts who cared about us to step outside the box and defy convention. Could the possibility exist that you might not be able to understand this article, or get this far reading it, if that weren’t the case?

Serving high quality “smart water” isn’t the only way our utility people are defying convention. What happens to the wastewater is perhaps even more amazing, even more of a reason to be glad you’re a Boca resident. That’s coming next. Keep reading BocaWatch.