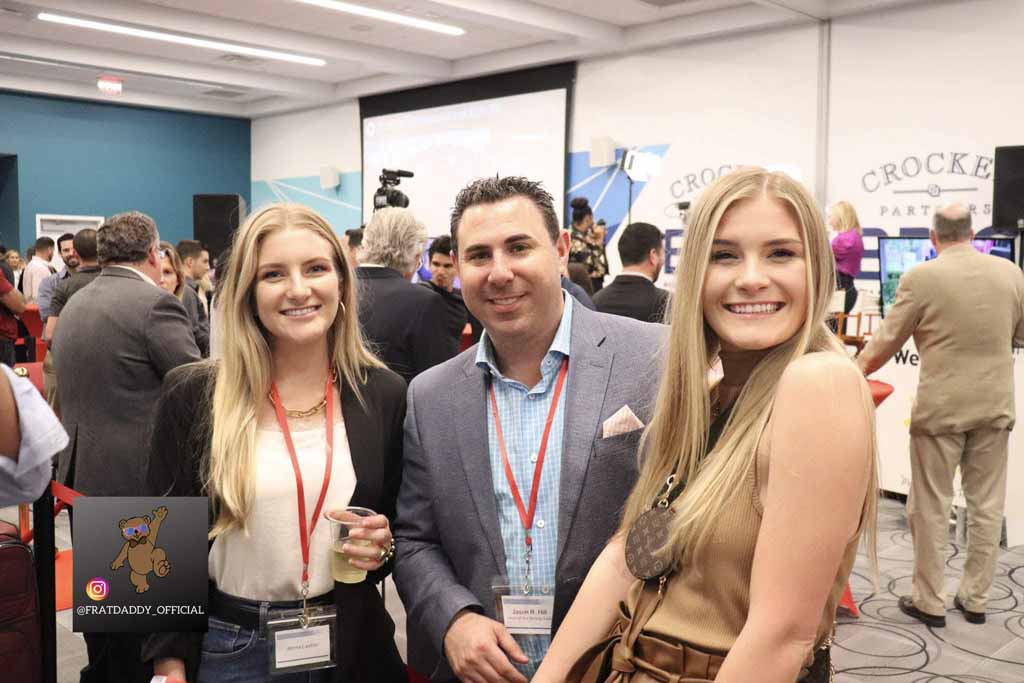 His business suit was as crisp as a new banknote and dyed to a uniform shade of bleak grey. He stood there in the distinguished cutting lines of a great tailor, one who could take his standard form and make him a figure of power. He gives his sleek business card before applying a firm handshake, still keeping eye contact.

The event was put together by:

Some of the local entrepreneurs from the community included:

The host of Boca’s entrepreneur podcast, ‘The Shrimp Tank’ and CEO of Client Focused Advisors, Jason R. Hill, is the event organizer for ‘Entrepreneurs in Paradise’. Hill, who uses the podcast as a way for entrepreneurs to discuss successful business strategies, has put in four months of work to hold this event.

“The first event was done in 2018,” said Hill. “This is our first time doing it with ticket sales, having a VIP section, securing the location, and getting people to come out through emails, Facebook all that stuff was a lot of hard work.”

Soon to be FAU alumni Miranda Dunn has been with Boca’s ‘The Shrimp Tank Podcast’ since it started over 83 weeks ago. Dunn, who is part of public management, explained how they reach out to entrepreneurs and companies mostly through LinkedIn, Instagram, and emails.

“When we see someone original or with their own setup we find that special,” said Dunn.

Most old plastic containers recoil like they can feel the years of heat, wrinkling into a ruche around the burn. This is why co-founders Chris Mundy and Johny Delvar have created ‘Lock it Plates’. This modern portable container unlocks creating two separate plates. Each container has a built on cup attachment under the plates that make it possible to carry a full meal and a drink in just one hand. 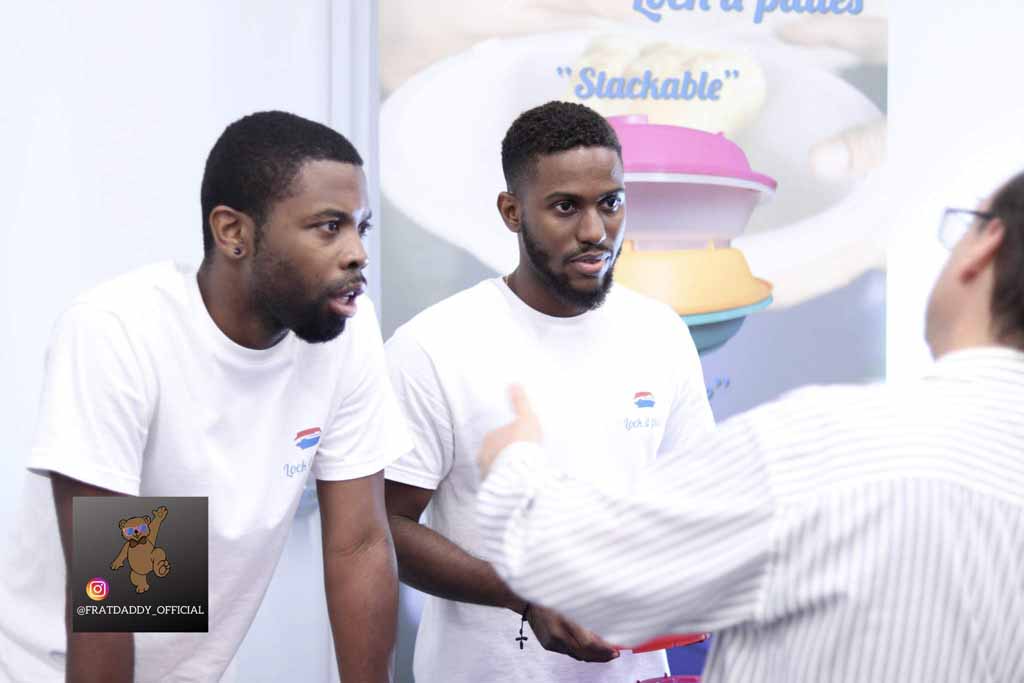 Mundy and Delvar have known each other since 2009. But it wasn’t until the 2010 earthquake that hit Haiti where Delvar volunteered with the Red Cross and thought of the idea to start a business. During that trip, Delvar realized that the lockable plate idea would be useful for distributing food to the victims who were dealing with unsanitary conditions and they realized that there was too much usage of plastic.

“One of the greatest moments for us was when we stepped on the campus of FAU and we went to a dining hall seeing all the students with our products in their hands,” said Mundy.

Fashion and fitness come together with Nicole Biscuiti’s patented gym tops with built-in collarbone guard for athletes’ barbell workouts. Biscuiti is the founder and creator of ‘The Chestee’. 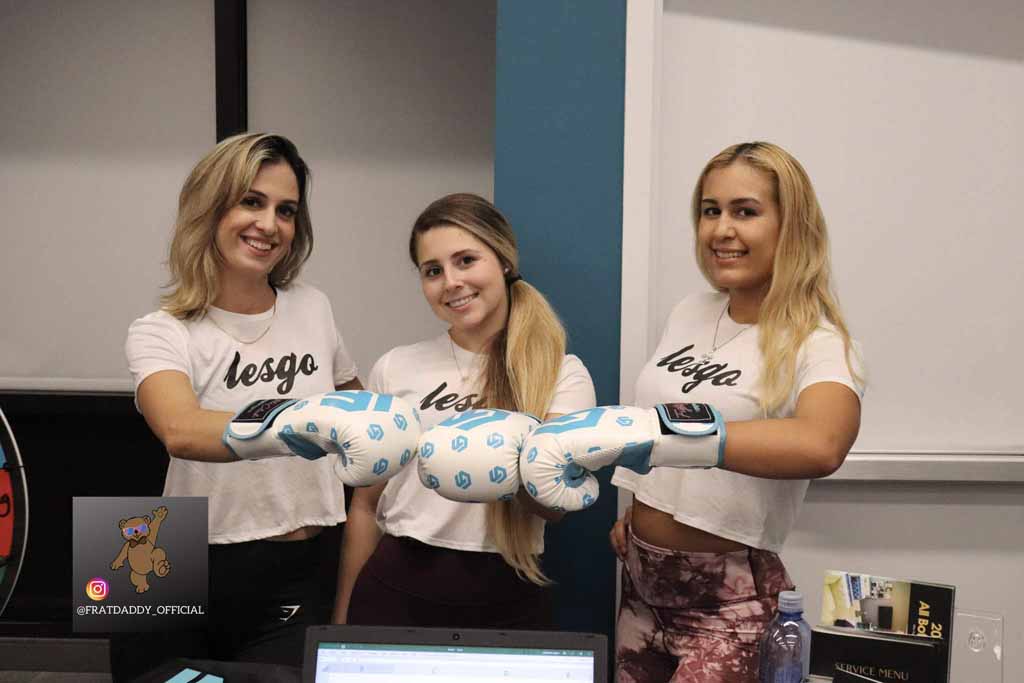 As a fitness enthusiast, Biscuiti knew a workout was going well when the sweat droplets on her skin began to run down her face and limbs and splash onto the floor. Beads as salty as tears would run into her lips. But at Wodapalooza in 2012, a barbell on Biscuiti became a bruise fest on her chest and in March of 2014, Biscuiti became stronger knowing she could protect herself and other women. 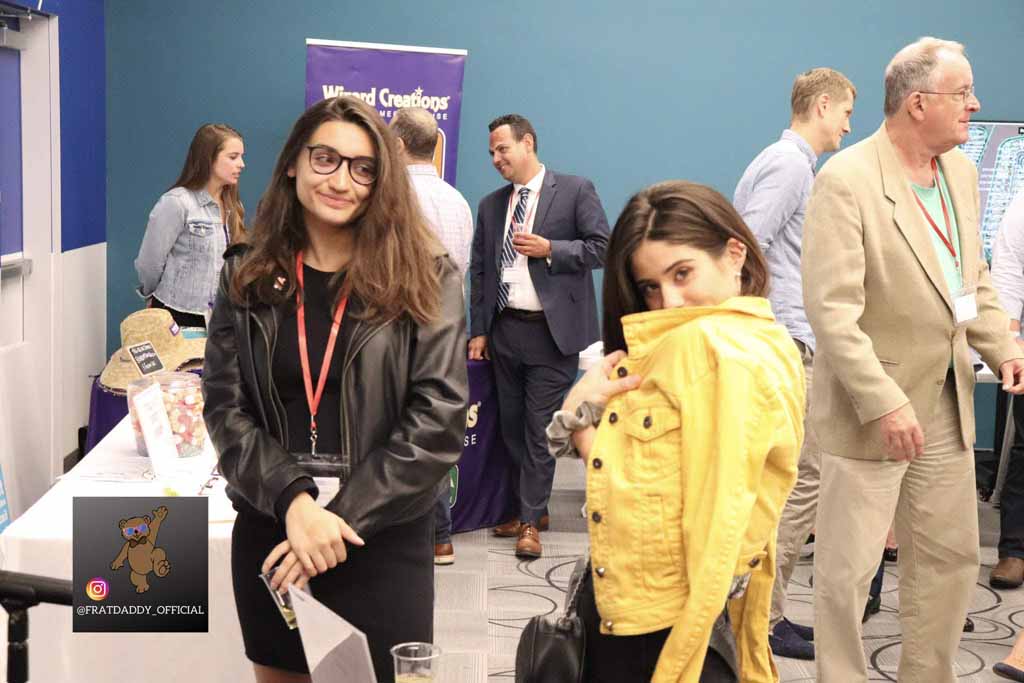 “Every single bra has a built-in collarbone bar for protection against bruising, scrapping, for those who work out or do barbells,” said Biscuiti.

‘The Chestee’ is designed with premium textiles and innovative technology, enabling sportswear to be more versatile and comfortable while still be fashionable.

“Celebrating and empowering strong women and giving women a voice to celebrate exactly who they are in their skin today,” said Biscuiti.

‘Two Degrees’ is an FAU Tech Runway that won the tech competition at the end of 2017. The app connects the community and world through mutual friends. ‘Two Degrees’ is creating a socially driven marketplace that allows businesses to establish and build networks directly with the friends of their customers, using the customer as a (mutual-friend) gateway to engage the second-degree friend. 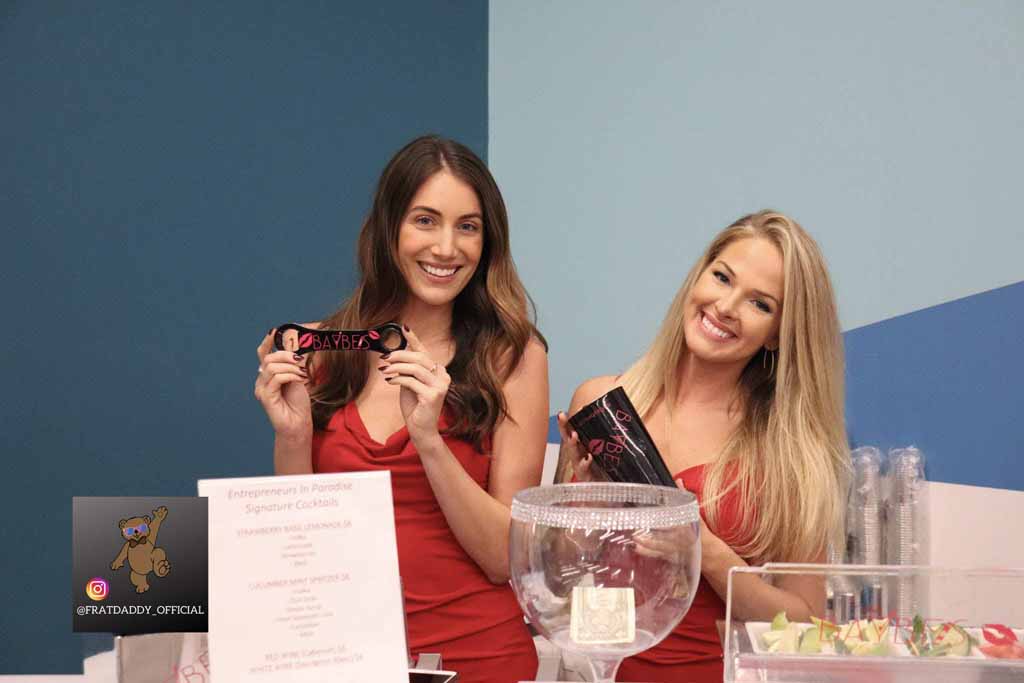 The company uses a patented technology that creates new relationships for their users using geo-location and phone contacts. They have more than 275,000 users, 75 percent of whom reside in Florida.

“We’ve reached half a million users and we’re going to take that model we’ve done in Boca to other places,” said Business Development for ‘Two Degrees’ Jesse Todd.

Todd has seen the app getting more attraction from FAU, Gainesville, and Tampa.

Bryan Rammel of ‘Two Degrees’ has an interest in seeing local businesses grow which is why he got involved with ‘Two Degrees’. 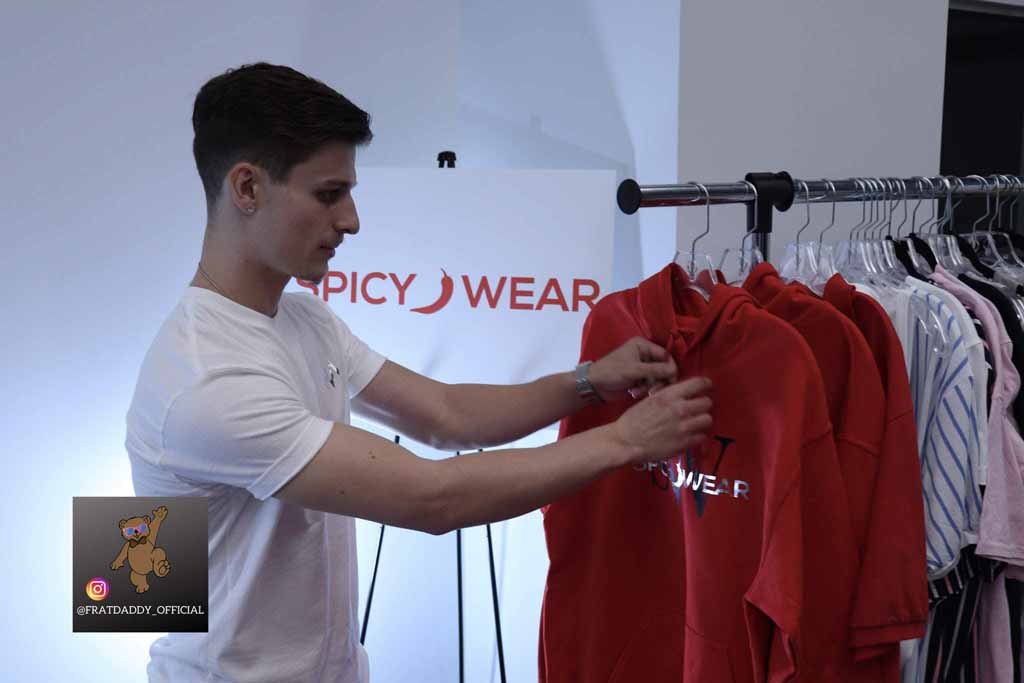 “I have a passion for helping local businesses grow,” said Rammel. “Looking at the trends to see “what people want and seeing the spots people are going to and seeing if we can run a deal to our users to get them as returning customers.” 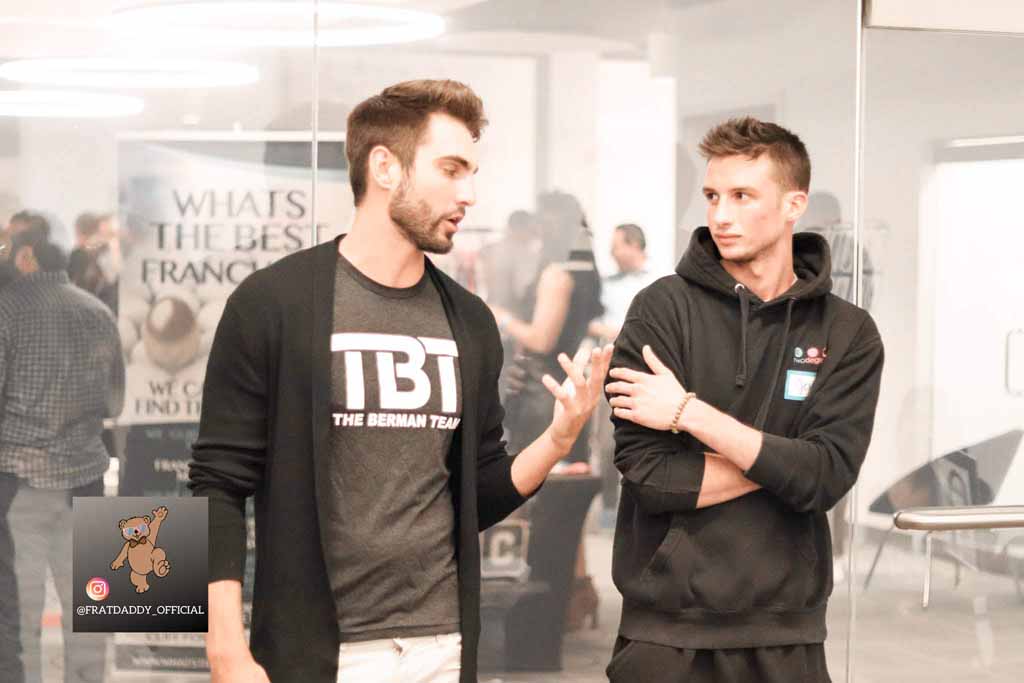 “There are no freaking lanes, you can blow up a lane and take your talents, your skill sets and go wherever the Hell you want to go,” – Heather Monahan

He has satisfaction as if having completed a deeply, personally needed action; expressed by the slightest curve at the mouth’s corner and youthful confidence worn in a slight raise of the eyebrow above a quizzical, joyful eye. Transaction specialist and ‘Entrepreneurs in Paradise’ attendee Alexander Lorenzo has an interest in cryptocurrency (a digital or virtual currency designed to work as a medium of exchange). Lorenzo attended ‘Entrepreneurs in Paradise’ to network and explain how blockchain is a growing list of records that are linked using cryptography.

“The reason I came to this event is because every single business in this whole entire establishment will eventually have to integrate blockchain technology or online transaction to help their business grow,” said Lorenzo.

By design, a blockchain is resistant to modification of the data. Lorenzo does local seminars on digital assets and Lorenzo wants to make cryptocurrency common to not just businesses but the common person.

“I put 14 to 16 hours a day to understand various topics,” said Lorenzo. “I come to network events like this to educate on making money off digital assets which are the best producing assets of 2019.”

“It’s manual, and this takes 10 to 30 hours,” said Graff. “We now scan the entire engine with cameras to document everything and we got that time down to 30 minutes instead of 30 hours.” 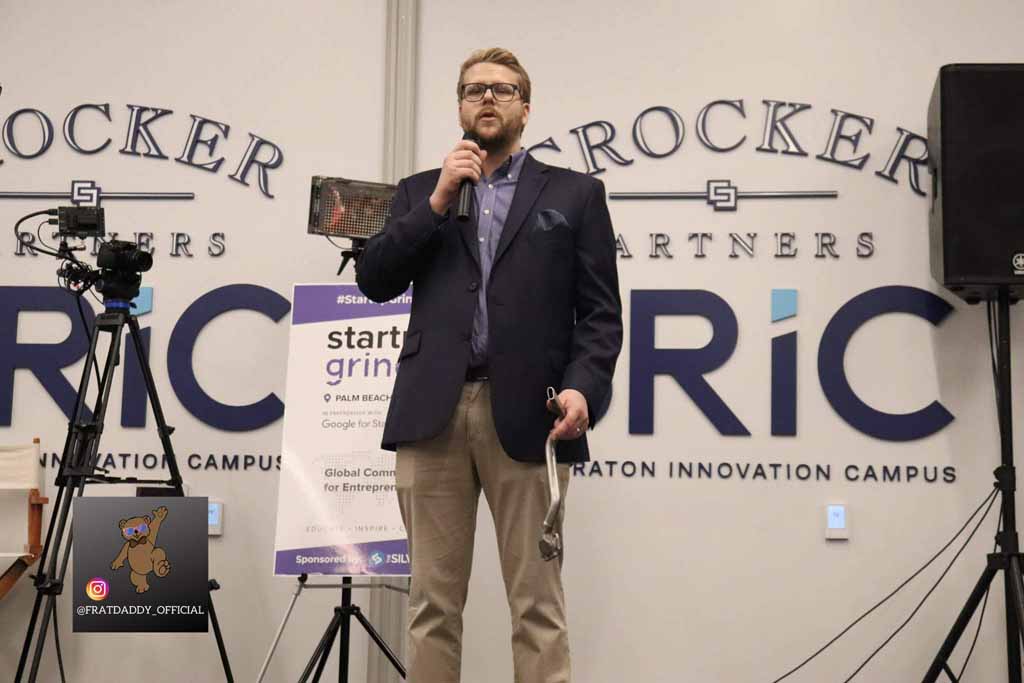 Graff, who has experience with flying and mechanical work, stated the importance of networking and how it may lead to open doors.

“As entrepreneurs, we have to learn to be humble and not think we know how to do everything in the beginning,” said Graff. “Even Steve Jobs had a really good team to help and it’s more than just sharing your business on Facebook because it’s more of who you can know to open doors for you and give you physical credibility.”

A faded red leather briefcase was held in the hands of the upright man. Together they glided along, the body and the case equally detached from the legs. A woman was half laughing half hiccupping. Even the most serious businessman found himself in a low rumble of laughter and feeling the vibe of the music from DJ/Producer Vinny Ventiera.

They stare at her in awe. She moved with feeling on that stage, pouring forth an outburst of emotions through her movements, not only moving her body but moving the crowd that watched and listened to her in pure amazement.

Author of Amazon’s number one selling Business Biography ‘Confidence Creator’ and motivational speaker, Heather Monahan, also attended. Monahan drove from Miami to discuss having confidence in your business no matter what failures or doubts one may face. As a Chief Revenue Officer in Media, Monahan is also a Glass Ceiling Award winner, who was named one of the Most Influential Women in Radio in 2017. Thrive Global named her a Limit Breaking Female Founder in 2018. 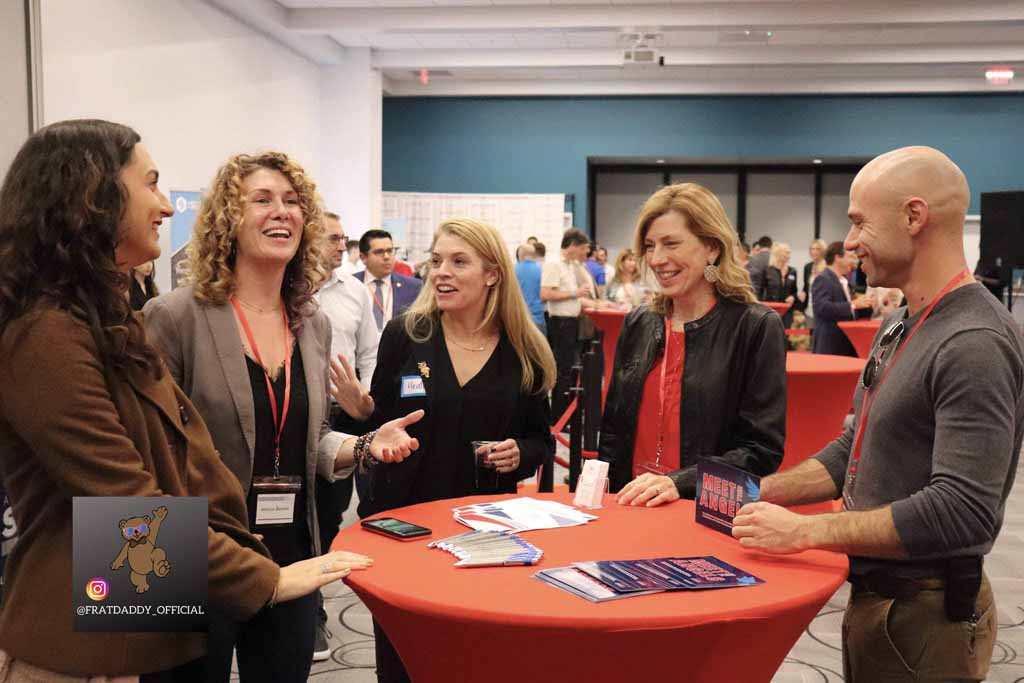 “After being named one of the most influential women in radio I was fired a month later,” said Monahan. “After the tears, I started to get real and remember that there are no freaking lanes, you can blow up a lane and take your talents, your skill sets and go wherever the Hell you want to go.”

Monahan’s speech leads to applause like an auditory volcano. It’s quiet one moment then deafening the next, rising to a crescendo.

Monahan said, “On every interaction, entrepreneur or not, if you are nice to people, care about them, and treat them well, they’ll treat you well and they’ll show up for you.”