Home Community Interest Beyond the Cape: A Showcase of Comics and the Artist Inspired by...

It wasn’t until June 1938 when the Golden Age of Comic Books began with ‘Action Comics #1’ debuting ‘Superman’, followed by ‘Batman’ less than a year later. Over 80-years-later, superheroes, the comic book art, and industry have influenced generations. With blockbuster films such as ‘Avengers: Endgame’ becoming the highest-grossing movie of all-time, or more recently Marvel Studios-Disney announcing a sequel film to ‘Black Panther’, comic culture has gone mainstream and are more popular than ever. Now, the Boca Raton Museum of Art is getting in on that mainstream popularity and exploring the world of comics by going beyond the cape.

‘Beyond the Cape! Comics and Contemporary Art’ focuses on contemporary artist influenced by comic books and pop art. The Boca Raton Museum of Art exhibit inspired by comics and superhero culture takes off the mask and brings awareness to troubling themes such as racism, gender equality, LGBTQ rights, climate change, and politics. The Boca Museum of Art features more than 80 works of art taking almost the entire first floor of the museum. 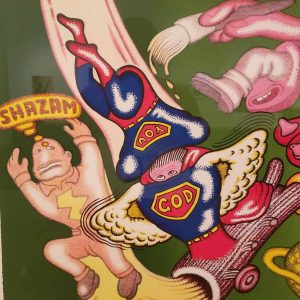 ‘Beyond the Cape!’ features of 40 art-world superstars and some of the most acclaimed underground comic book artist such as, 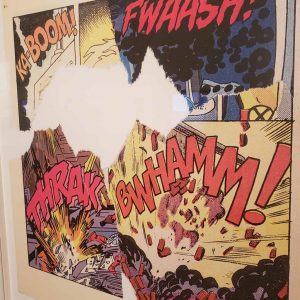 These artists come from all over the world with a variety of viewpoints. An artist like Renee Cox adapts superhero themes in her work or Joyce Pensato and Enrique Chagoya uses iconic characters from comics to comment on issues that are relevant today.

You don’t have to be faster than a speeding bullet, more powerful than a locomotive, or able to leap tall buildings in a single bound to appreciate the exhibit. Even non-comic book readers such as Ashnide Jean-Baptiste find something to appreciate. 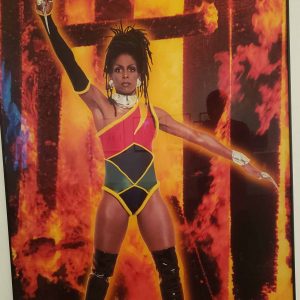 The last time Baptiste was engrossed by the bold colorful pages of comics was 10-years ago when Baptiste was an avid reader in the ‘Dragon Ball Z’ series. A Japanese animated series which follows the character of Goku, along with the Z warriors, defending the Earth against evil. These characters have the abilities to level up their powers and go “Super Saiyan” to unleash their full potential.

Baptiste took this meaning out of her pages and put it into her reality. 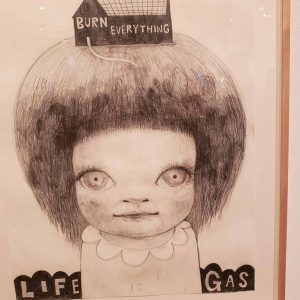 “I like the way how in each episode and comics of Dragon Ball Z Goku was leveling up and going Super Sayian and would ascend to the next level like myself or anyone looking to benefit themselves to a higher level,” said Baptiste.

Even though Baptiste is not the vital comic or ‘Dragon Ball Z’ fan she once was, Baptiste still appreciates how comics and the art can speak volumes.

“I think it’s great that comics can be used to make political statements, it opens the door for more conversation, searching, and I’m seeing a lot of art and voices from people of color and I really like that,” said Baptiste.

Baptiste ended by saying that if she were to create her comic series with a motivational message, it would be about finding yourself and how that journey never ends because there is always room to learn.

Rare comics will also be on display along with cartoons and animations from the early 1900s on vintage televisions. Kathleen Goncharov, who is a Senior Curator at the museum, is working with Calvin Reid, who is a fan and expert in the field of comics.

Reid, who was one of the first comic book critics to analyze how comics can also be for adults during the 1980s, selected which comics should be displayed in the reading room and selections from Reid’s own collection. The reading room is designed by IKEA and features over 200 comics and graphic novels for the public to read in the relaxed setting. The reading room features readings by Allison Bechdel, Trina Robbins, and George Takei.
Engrossed, absorbed, almost in a trance, transported to another reality. Pompano Beach resident Brendan Cullen poured himself into the pages while in the reading room. Brendan Cullen is a lifelong comic fan.

“For as long as I could read I’ve been into this and I’m fine with comics being used to make a message,” said Cullen.

Cullen, who grew up reading such comics as ‘Marmaduke’, and ‘Superman’, is a fan of the funnies and humorous characters.

“I like Howard the Duck,” said Cullen. “He is funny and if he were on Instagram I’d say he’d do hashtag Cheese and Quackers for a picture of cheese and crackers for food.”

When it comes to comics, contemporary art, and the exhibit, Cullen ended by saying, “Pen, paper, ink, diverse characters, that feel funny and surreal, everything we need is there and here at the museum.”

Beyond the Cape! runs through Oct. 6 at the Boca Raton Museum of Art: 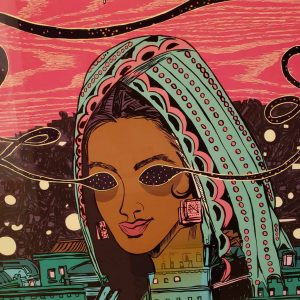 Pictures were taken by Nile Fortner