A lot has happened since White Paper II.

Despite nothing much changing, the City Staff and the City’s Urban Consultant, Calvin, Giordano & Associates (“CG”) are now recommending that the Community Redevelopment Agency (“CRA”) approve Mizner 200/3.

Our opinion remains the same. Mizner 200/3 violates Ordinance No. 4035 in two very fundamental ways and should not be approved by the CRA.

First, its single building is just too big – not at all harmonious with nor in scale with the architectural and design environment of the Downtown so carefully created by the CRA’s 25 years of strict enforcement of Ordinance No. 4035. The building mass of Mizner 200/3 must be spread over ELAD’s 7 acre site in several harmoniously sized “Mizneresque” designed buildings, separated by vitas and views.

Second, putting aside its overwhelming bigness, the single building of Mizner 200/3 is not “Mizneresque” in design. No objection to its modern rather than Mediterranean revival look. Regardless of the look, Ordinance No. 4035 demands a “Mizneresque” design. That is, a building varied in height, varied in roof-scapes, with a setback profile and with facades that are varied and articulated. Mizner 200/3 is none of these. Mizner 200/3 is a 100 foot high, 1000 foot long wall like façade along Mizner Boulevard, repeating the same design over and over again.

The Downtown Design Code is just as much a code requirement in the Downtown as the permitted height of a building or the required open-space.

Generally, the intent of the Downtown Design Code is to minimize through design the appearance of building mass. Such being important in an urban Downtown where large building are permitted. Mizner 200/3 is the exact opposite. Its absence of a “Mizneresque” design accentuates its already overwhelming building mass.

Mizner 200 is being proposed as one building that is divided into three distinct zones. Each of these zones is then broken down further in scale through form and articulation.

We take this statement as ELAD’s tacit agreement with our basic premise stated above that the Downtown Design Code requires several, separate harmonious and Mizneresque buildings on this large site.

Nonetheless, despite the words, Mizner 200/3 fails to present as “one building that is divided into three distinct zones.” It presents as one building repeating the same design over and over again.

• What exactly is the design dispute? In White Paper II, we provided some examples of multiple building designs for the ELAD site. These designs are attached.

There is a significant difference between the two designs – Mizner 200/3’s single building vs. multiple buildings. Both cannot comply with the same Downtown Design Code.

Specifically, Mizner 200/3 fails to comply with the Downtown Design Code because: 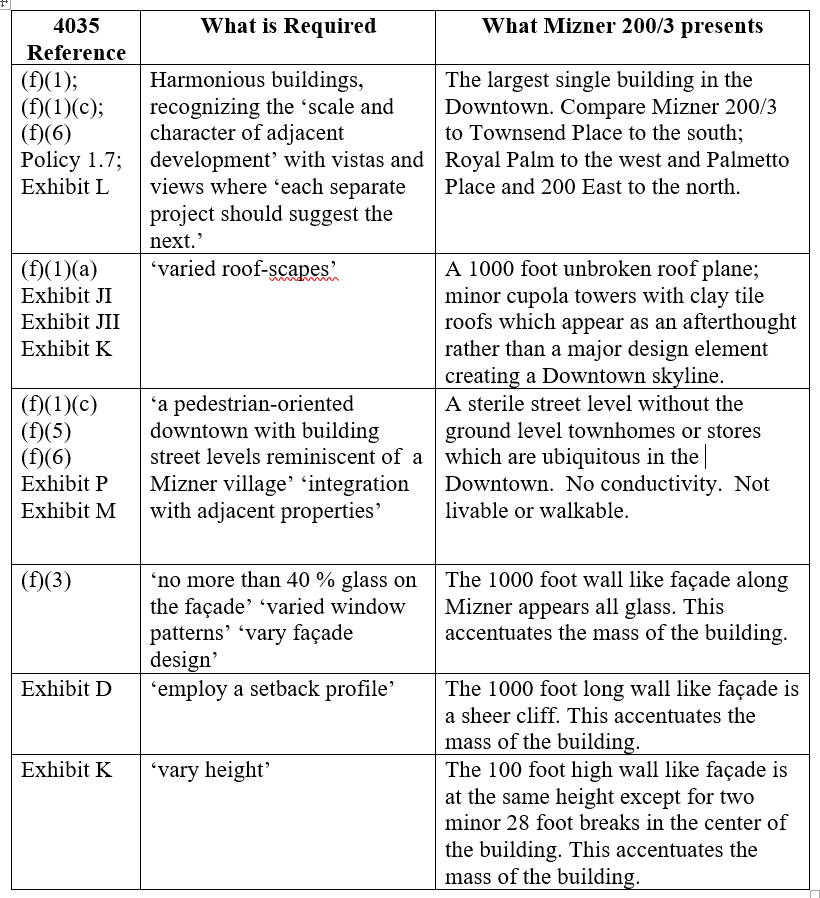 Whether the Mizner 200/3 complies or not with the Downtown Design Code is a question of code compliance to be decided by the CRA.

Within ten (10) days of the close of the public hearing, the CRA shall approve, approve with conditions or disapprove the proposed Individual Development Approval.

It is universal in local zoning regulations for major decision to be made by the elected officials who answer to the electorate. Here, the CRA will approve or not what will be, by far, the largest single building ever to be built in the Downtown.

Ordinance No. 4035 and the Rules of the CRA set forth a process of reviews and recommendations leading up to the final public hearing before the CRA and the ultimate decision of the CRA.

The goal of the process is to inform the CRA about the issues requiring a decision so that the CRA can make the best decision possible at an open meeting.

• What does the City Staff and CG recommendation of approval mean?
The only decision that counts is the ultimate vote by the CRA after consideration of the input at the public hearing and the recommendations of the City Boards.

The opinion of City Staff and CG that Mizner 200/3 complies with the Downtown Design Code does not make such compliance a fact. If City Staff and CG opinions were fact, then there would be no need for public hearings, City Board recommendations and a decision by the CRA.

• Can a decision of CRA be challenged in Court? Yes, but where the issue is whether a building complies or not with the Downtown Design Code, two principles of judicial review of local zoning decision should be kept in mind. First, courts always defer to the decision of the local elected officials who heard all the evidence. Second, the decision of the local elected officials is upheld as long as there is some substantial, competent evidence in the record supporting their decision.

The final and decisive Public Hearing before CRA has not been scheduled.

Now is the time to make your voice heard. Attend the Public Hearings. Contact the members of CAB, P&Z and the CRA. 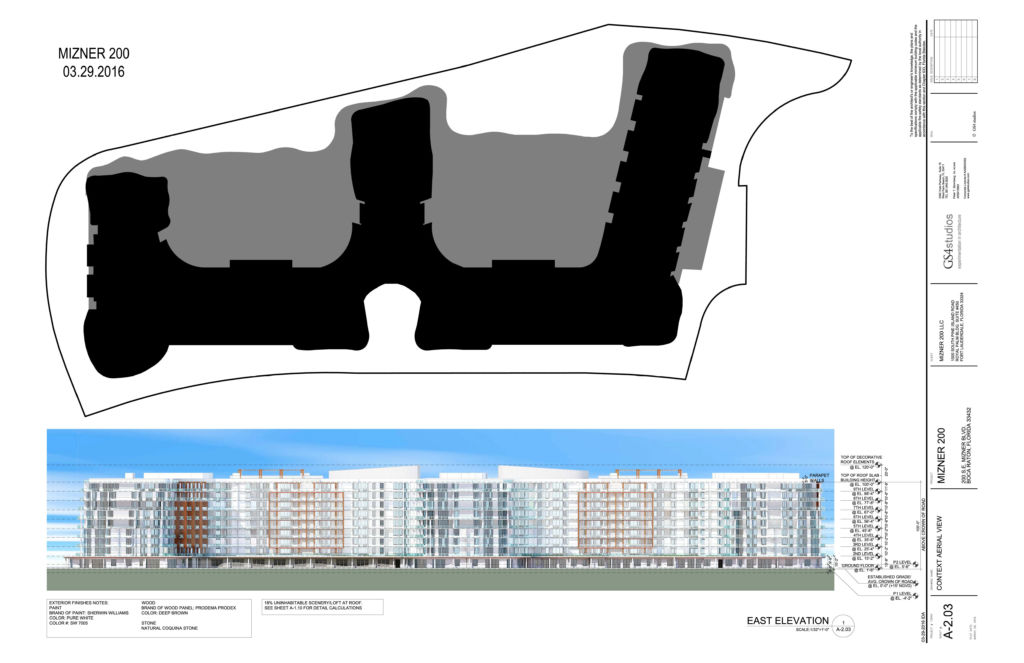 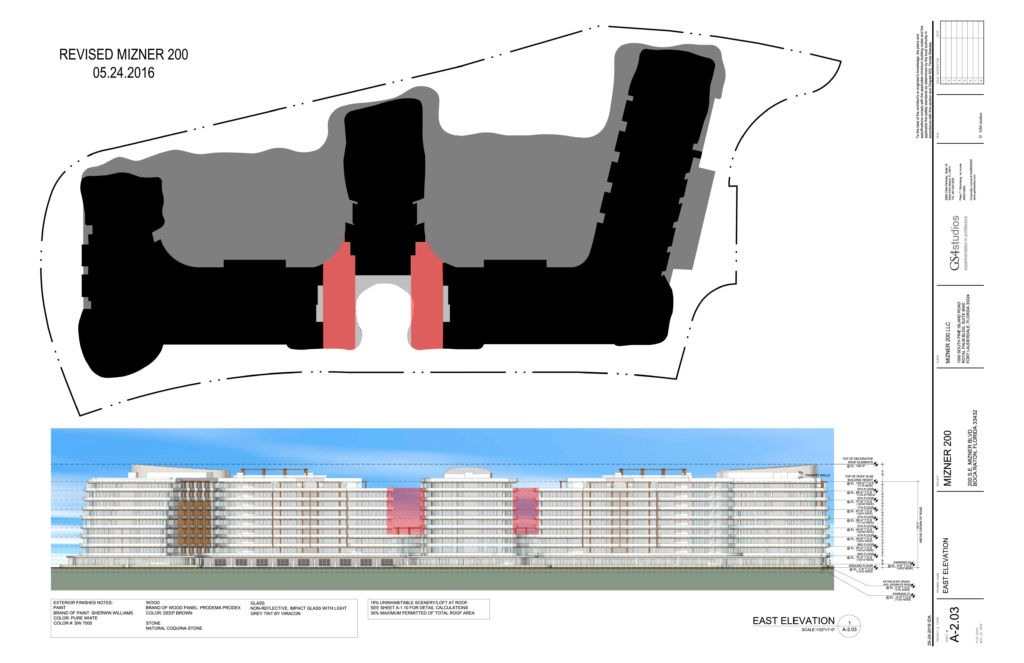 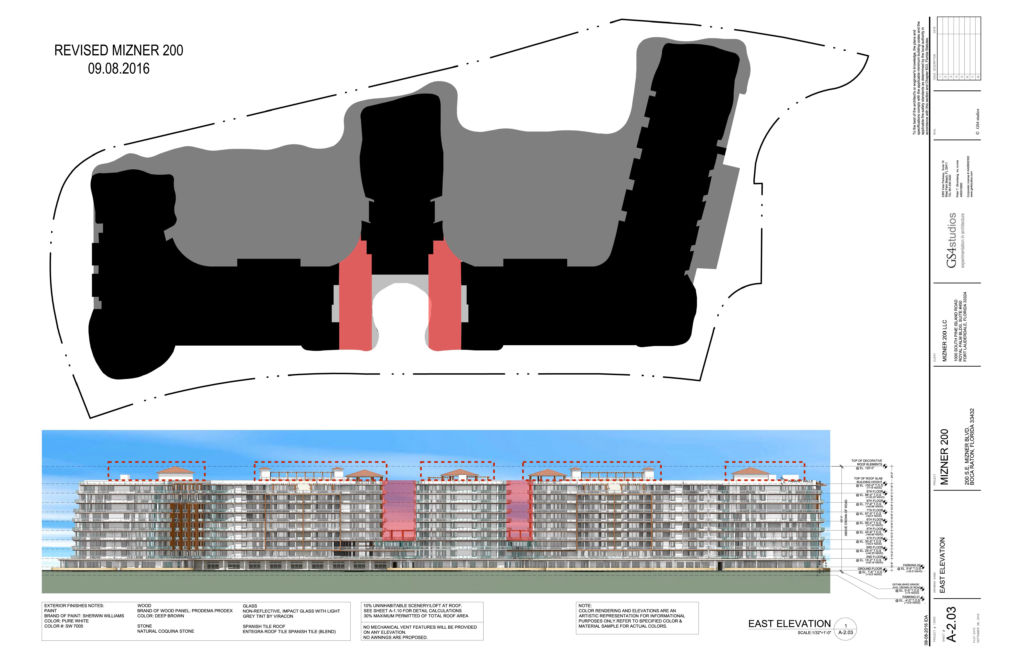 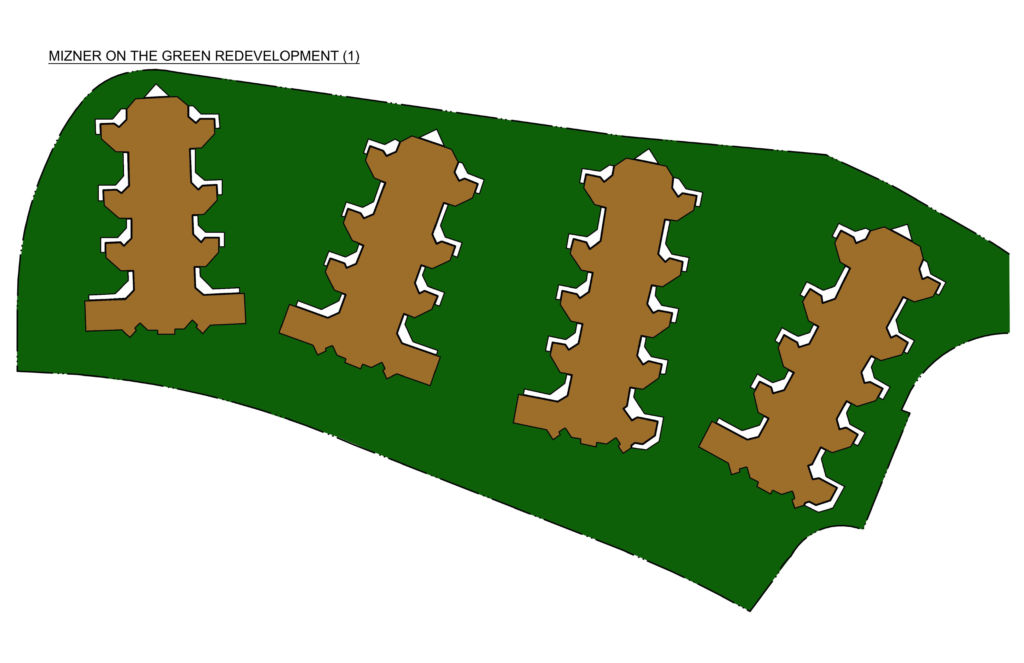 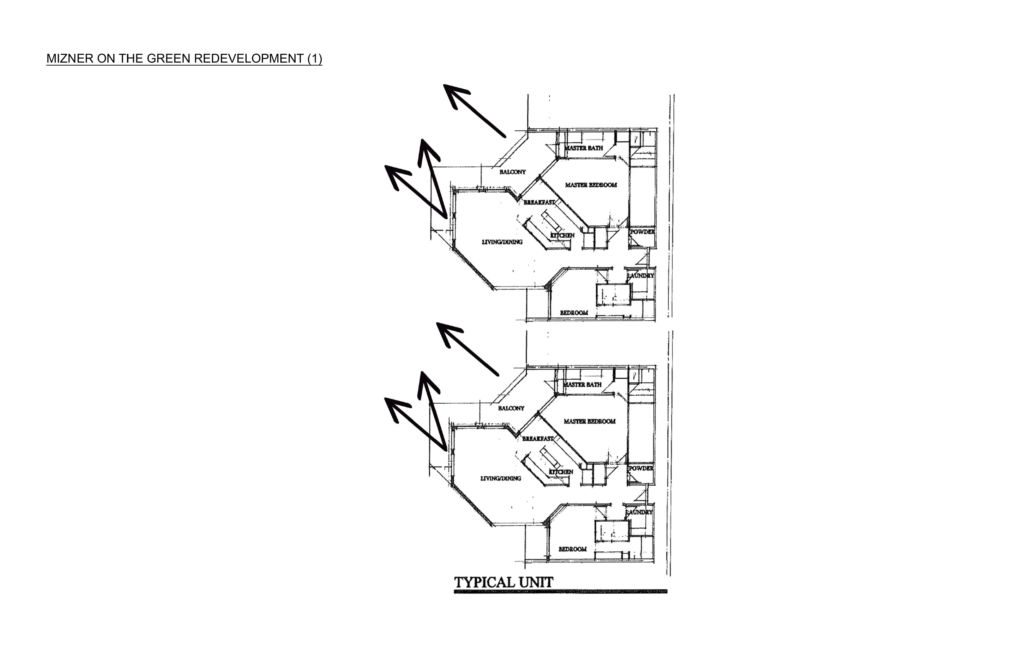 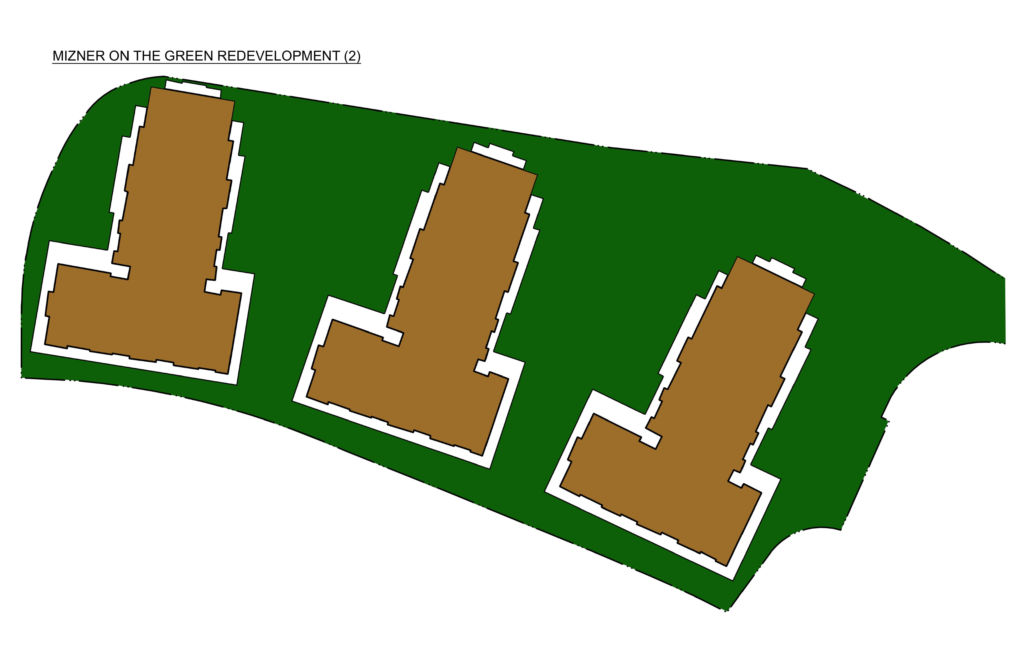 Below is the original submittal for Via Mizner by Zom Development. This 629’ building was summarily rejected by staff Development Director at the time, Jorge Camejo and was vehemently opposed by Resort and Office building across the street at Camino & Federal. The common concern was the unbroken length of the building. This led to the eventual 3 building Via Mizner Development. BTW Via Mizner is 7.8 acres similar to M200.  If a 629’ building triggers a multi building Urban Plan at Via Mizner, why are we seeing a 1,000’ long building approved by staff? Hmmmm? A 28’ separation is negligible. Their building still presents itself as one continuous building and is not harmonious to its surrounding neighbors. 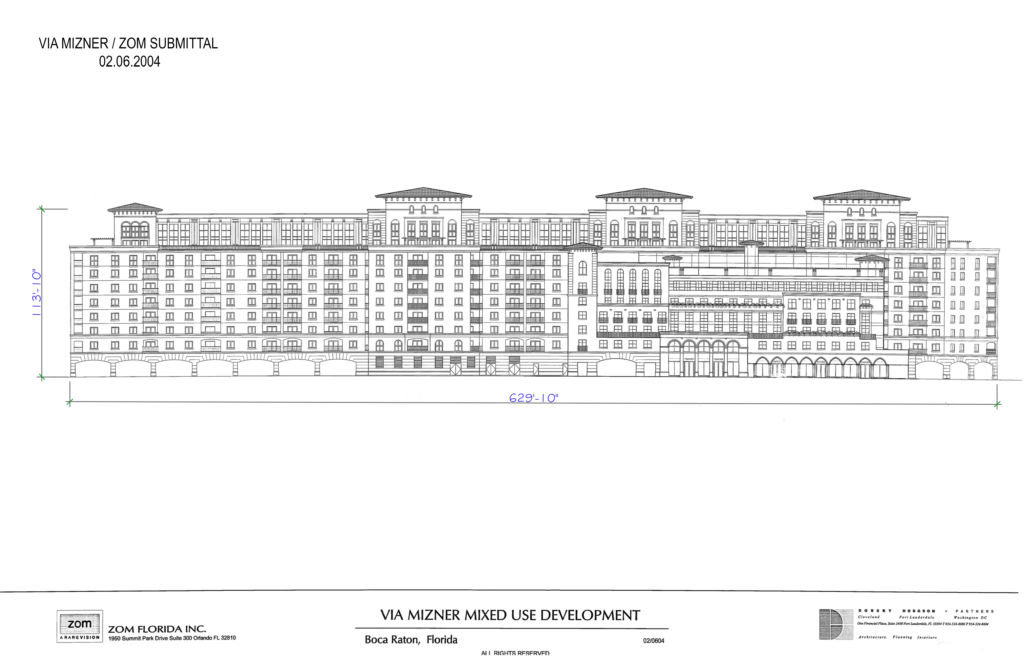