On March 31st at 10:30 A.M., the residents of Boca Raton won and won in a major way.  ‘Resident Friendly’ voices now strongly influence the tone and attitude on the City Council.   ‘Resident Friendly’ change brought about by the overwhelming public sentiment uncovered in the recent citywide election process.  This is a good thing…a very good thing!

The residents spoke and the council now reacts.  With the swearing in of Councilwoman Andrea Levine O’Rourke, the residents now have a voice for their concerns; a voice not limited to a mere five (5) minutes at the public microphone.  This became apparent in her first public comment as Boca Raton newest elected official when she takes greater then the 5 minute limit to outline her resident oriented platform and the visionary direction she see for our city’s future.  Bravo!

After taking the oath of office administered by City Clerk Susan Saxton, the overflowing crowd’s reaction was thunderous.  The Councilwoman was then invited to take her seat on the dais for the first time….a small step for her; a big step for the residents. https://youtu.be/QqIsASACLek 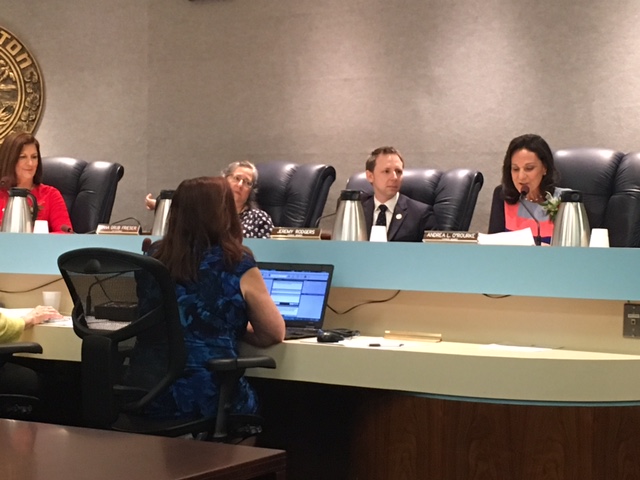 While Mayor Haynie’s and Councilmember Singer’s remarks were received with recognition and applause, Councilwoman O’Rourke’s remarks were exceptional and certainly received that way.

First reflecting on the six (6) month campaign and on her family and friend support, she delivers an inspiring resident oriented vision statement.

“This is not my seat….It belongs to all of you…” sets the tone and temperament of her candidacy.  She goes on to say that she “…only wanted to be a voice of the residents…”, a voice for the “…most important asset…the people of Boca Raton…”

Committing to act responsibly and collaboratively, she sets as her goal the “long term interests of the residents” and commits to leadership which strives to “Be Exceptional.”  https://youtu.be/geR_tgQv0JA

So, with Councilwoman O’Rourke’s election along with the ‘resident friendly’ campaign promises of Councilman Singer, a basis forms for moving forward with residents being now back in their rightful place; their place at the top of the City’s organization chart.

Mayor Haynie in her post-election remarks both in chambers and in the media also seems to recognize resident oriented concerns.  If true, this is also a good thing….but perhaps a most telling result of this election win is that we, the residents, now can set our collective sights on the remaining members of the City Council.

Councilman Rodgers and Councilman Weinroth are up for re-election in the 2018 election cycle.

With ‘Resident Friendly’ now being the prevailing mood for Boca Raton politics, we, the residents, will have greater influences for the future of Boca Raton than ever before.

YOUR VOTE IS YOUR VOICE; LET YOUR VOICE BE HEARD!