With the ever-expanding ‘downtown’ of Boca Raton and the insatiable appetite of the over-development community, BocaWatch is taking a look at a traditional community’s ‘next’ horizon. Pearl City, with its rich culturally diverse history, deserves a good, long and hard look at its preservation and protection before this historical community is lost in the collective memory of Boca Raton. Beginning with this article’s historical reflection, BocaWatch embarks on a series of articles and videos reflecting the community’s past, present and future. Today’s article speaks to the past and present evolution of the DISC, a 501( c ) ( 3 ) non-profit organization ( Developing Interracial Social Change), through the eyes of one of its founders, Marjorie O’Sullivan, a long-time, 46 year resident of Boca Raton. Next week BocaWatch will publish a two part video series capturing the community efforts of Mr. Wayne Barton, one of President George H.W. Bush’s 1000 points of light. Wayne will share his insights and predictions for the present and future of this traditional African American community within the city of Boca Raton. Other leaders are being scheduled for articles and videos on this important subject. Preservation and protection of these traditional neighborhoods is important. Gentrification is at the doorstep. Developer money now savors properties between Federal and Dixie Highways north and south of Glades road. The Mayor has spoken about Dixie Hwy as being the downtown bypass directing traffic flows away from the core of the downtown. The interests of these affected residents, their historical prospective and their future stake in the community is a discussion worth having. BocaWatch will provide the platform for such a discussion. Your comments are welcome!

This year, amidst the July 4th publicity, there were some persistent expressions of surprise that the holiday was only established in 1938.  The event it celebrated – the Declaration of Independence – occurred in 1776!  True, it is no simple matter to establish a national holiday.  Not the least of concerns is the cost to cities of giving their employees a paid day off.  But in the case of the Declaration of Independence there was a glaring disconnect from the social and political realities at that time.

The Declaration proclaimed: “We believe that all men are created equal and have God given rights to life, liberty and the pursuit of happiness…”  In fact, these rights were denied to people of color, women, and those that did not own property!  It has been said that our ideals reveal who we want to be; our compromises reveal who we really are.

It could be considered striking then that a national holiday to honor Martin Luther King, Jr was declared less than twenty years after his assassination.  Naturally, there was strong opposition, but stronger forces prevailed and the holiday was established in 1983 under President Ronald Reagan.  It remained for individual cities to decide whether and how to celebrate it.  In some cities, the decision came easily.  In many others, there was indifference or even outright opposition.

I would like to focus on one city – Boca Raton, FL – where I have lived since 1971.  I want to describe the events and decisions that led this city to accept responsibility for proclaiming, and celebrating, MLK Day.  I also wish to explore how that celebration has evolved over the years.  And finally, I would like to consider other events which involved collaboration between blacks and whites which might mark progress (or lack thereof) in race relations in our city.

I believe it is necessary to begin with a brief reflection on the roots of racism in our country.  It is only as we come to an honest appraisal of our own history, that we can appreciate the significance of any progress in specific communities.

Slavery – the use of black men and women ‘bought’ in Africa – was incredibly cruel and exploitative.  But it was also absolutely essential to the economic prosperity of the southern states.  This slave trade and slave labor required a powerful justification.  White supremacy was that justifier.  And even though slavery was abolished during the Civil War, the belief in white supremacy flourished, fueled racial fears and hatred and fostered a new systemic oppression which became embedded in policies and practices which endure to this day throughout the country.  These beliefs are as easily eradicated as asbestos is easily removed from our buildings.

And so, we still have segregated neighborhoods, segregated schools, segregated churches and, to some extent, segregated work places.  High status positions are generally held by whites, while people of color generally serve in lower paying jobs.  People of all races are often in the same rooms, but they are not at the same table where important discussions and decisions happen.  I ask the readers to reflect on their own experience.

Given these realities, it would seem that the only way to foster active, respectful collaboration between the races would be through an INTENTIONAL process. In 1993, in Boca Raton, a white, Catholic, retired GE executive named Jack Herron had such a vision.  He said: “Let’s bring together five black Baptist and five white Catholics for regular prayer, fellowship and discussion.”  We did this, and those monthly meetings proved to be so rewarding that the group decided to name itself – Developing Interfaith Social Change – and then incorporated with the state of Florida as a non-profit organization.  Thus in 1994 DISC was born!

We decided as our first action to petition the mayor of Boca Raton to proclaim and celebrate MLK Day.  Eleven DISC members met with Mayor Bill Smith who said: “Yes, we will do it.”  The first celebration was held in January of 1995 at Boca Middle School with a packed crowd that was interfaith, interracial and intergenerational!  Perhaps some readers were there!  With further urging from DISC, responsibility was given to the Community Relations Board under Deborah Carmen – and importantly – a budget was established to fund a yearly celebration.  Eleven committed people were able to impact a city of 62,000!

It has been more than twenty years since that first event and MLK Day has evolved to include a ceremony at the MLK Memorial, followed by a march led by the Boca High School Bands and then entertainment at one of the City parks.  Responsibility has shifted to the City Event Planner.  For 2017, the city proposed a new idea – a Saturday night concert at Sanborn Square and then on Monday – a ceremony at the Monument followed by a March to Sanborn Square where there were family activities and food vendors.  This was a great success and drew many more people.  It will likely be repeated in 2018.

During those years since 1995 DISC also evolved.  It gained tax exempt status in 2000. We changed our name from Interfaith to Interracial to reflect the increasing focus on race relations in the country.  We held interracial healing workshops and dialogues, created a community garden, and offered historical walking tours of the Pearl City neighborhood.  In 2010, we launched an additional monthly meeting – the Pearl City Dialogue – to be a forum for residents to air their concerns.  It is always attended by community police officers and at various times by FAU students, Habitat, local church leaders and concerned citizens.  In 2016, we were partners with the Unitarian Church on an EPA Grant and carried out door-to-door education on staying safe during climate change crises.  We reached 99 households with informative materials and were acclaimed by the city as the only neighborhood in the city to do such a project.  Of course, we have always continued to play an active role in programming for MLK Day.  This fall we hope to launch a DISC website featuring the many resources in the Pearl City neighborhood – resources which are also used by residents from all over the city!

Finally, I would like to reflect on other developments in the City since 1995 which called for (or called forth) interracial collaboration.  The Wayne Barton Study Center opened in 1999.  Pearl City was declared “Historic” in 2000.  The Martin Luther King Memorial was built next to Ebenezer Baptist Church (NE 12th ST) and dedicated in 2001.  B’Nai Israel began coming to Ebenezer on the Sunday before MLK Day for a rousing interfaith and interracial service and fellowship meal.  Habitat petitioned the City to sell its foreclosed properties in Pearl City and began building homes.  The City created a Blue-Ribbon Committee in 2004 to implement long overdue improvements in Lincoln Court.  Meetings were chaired by a black pastor, Rev. Henry Willis.  Concerned citizens formed a Save Darfur Committee in 2005 and its membership was interfaith and interracial.  Mr. Batmasian formed an organization called PROPEL which was based in Pearl City and is active to this day.  Residents of Lincoln Court, under the leadership of Mildred Cooper, worked with the City to get speed bumps installed on their streets for the safety of children and elderly.  At some point, Sanitation Workers finally got to take their MLK holiday on MLK Day!  In 2015, the Pearl City community collaborated with the Boca Historical Society to stage a marvelous centennial celebration.  The Pearl City neighborhood has itself become increasingly multicultural.  It is gradually emerging from years of stigma and gaining new recognition of its value as a prime property neighborhood.  Witness the pack of developers who seek to buy there and gentrify these historic streets. 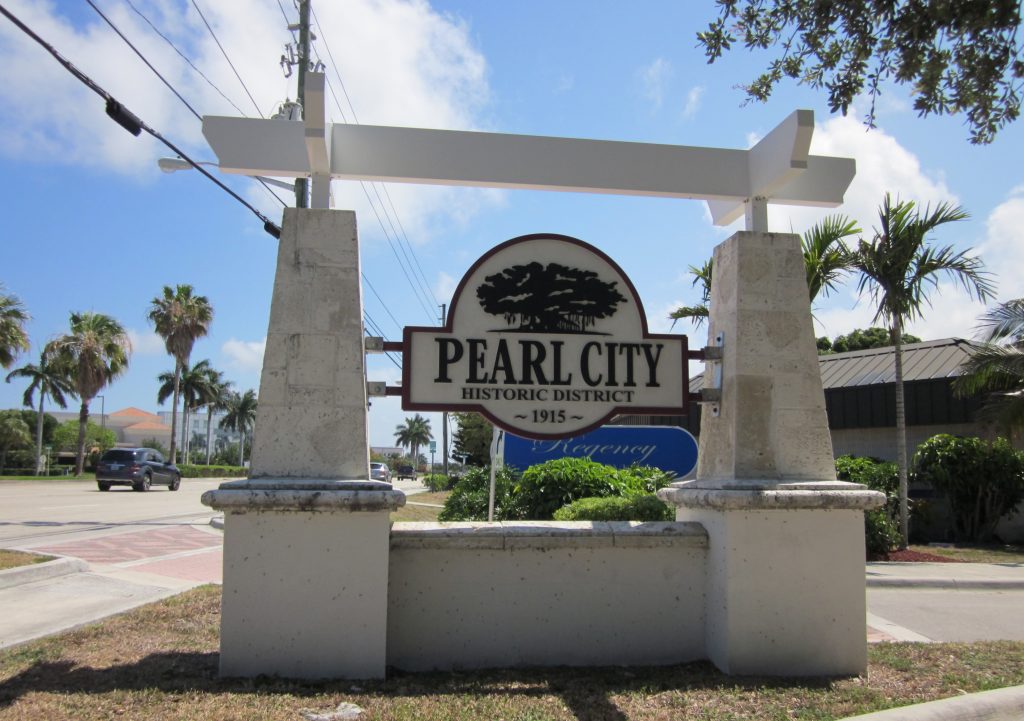 It is interesting to wonder how the decision in 1995 to honor Martin Luther King, Jr. may have moved various people and organizations to come into more equal and respectful collaboration with African Americans – thus helping to build something that was the deepest dream of MLK – “the beloved community.”  This reality would be marked by a warm fellowship and a true equality and respect for people of all faiths and races – actually a living realization of that ideal first proclaimed in 1776!

I would like to acknowledge the thoughtful assistance of Rev. Henry Willis in preparing this article. I would also wish to express my deep gratitude to members of DISC, living and dead, for the pleasure and privilege of being a member since 1994.