Home Boca Raton Development The Alina: From Monster to Monarch on Mizner 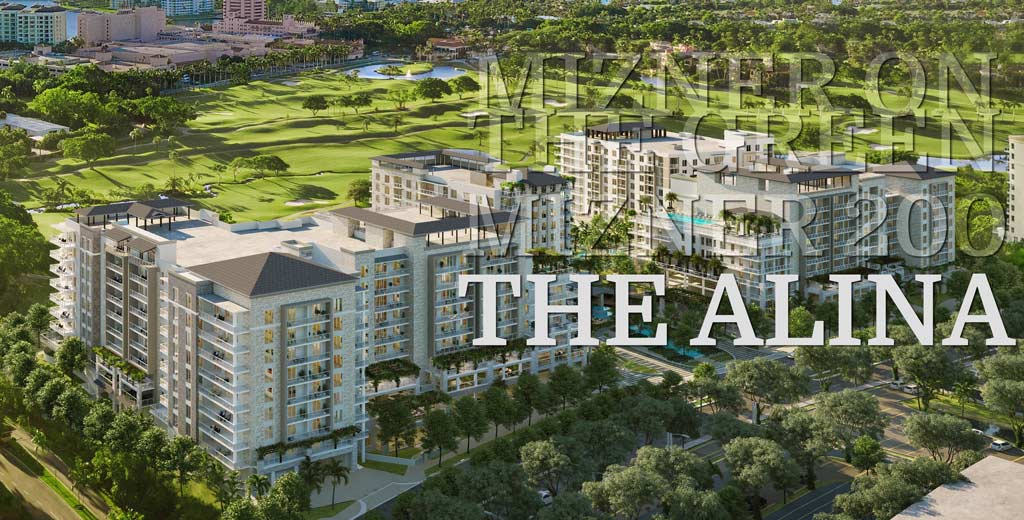 After over three (3) years of contentious, often heated, public discourse, the redevelopment of what was once known as the ‘Mizner on the Green’, a two hundred forty six (246) unit condominium development, has now received approval to redevelop the property with a three hundred eighty-four (384) unit, nine story condominium.( see the rendering provided). This re-development project complete with its structured parking will move forward in two phases, one currently out of the ground and the other designed and pre-approved for future development without further public discourse.

If you have driven along Mizner Boulevard in the last few weeks you would have been greeted on the east side of the roadway with a fenced in area displaying The Alina marketing materials describing “Boca Raton Luxury Condos“. What you would also have seen is a skyline crowded with cranes actively operating behind the display servicing dozens of cement trucks pouring the foundation of this highly anticipated addition to Boca Raton’s downtown landscape.

A controversial project from its start, community opposition mounted.

Opposition led by the residents of Townsend Place, its eastern neighbor, and, Investments Limited’s Royal Palm Place directly across Mizner Boulevard from The Alina. The opposition generally centered around the development’s design; its setbacks; and mostly, its impact on sightlines and vistas of these neighboring interests.

The applicant redesigned the project several times to meet and overcome the objections of its opponents. After much public negotiation, the process resulted in a formula that Boca Raton’s elected officials eventually could approve; a resulting plan allowing the landowner to now proceed with vested rights for its business surety.

In this process, all parties came to a negotiated resting point so that the landowner’s final design effectively addressed the immediate concerns of its neighbors while going well beyond those concerns and contributing greatly to the public realm; contributing to the experiences of all the residents and downtown visitors.

The contributions to the public realm made by this landowner/developer include but are not limited to the following:

The overall project exceeds the requirements of Ordinance 4035 standards with the following:

Not to get lost in the details, perhaps a better way to visualize the public realm merits of this development is for the reader to view Jack McWalter’s August 14, 2017 video titled “Billion Dollar Monster on Mizner”. Also, the really interested reader might use the 4boca.com search feature to review the dozen or so articles that were published over the years leading up to today’s situation.

Residents have clearly won great concessions from this developer specifically and the overall development community generally. There is now a growing number of examples where developers and land owners, as here, are making significant contribution to the public’s experience; the public realm.

Fair and earnest negotiations between landowner/developers and the City Council, a Council with a can-do open-minded approach, will resolve every development impasse and counter the ever-growing number of lawsuits where such negotiations have broken down.
Time is money…money to the landowner; money to the city; and, money to the resident taxpayer….none of these interest groups are interested in the waste of money or, for that matter, of time.