Overdevelopment, the leading issue in last year’s City Council elections, is back again…This time, however, it is complicated by school overcrowding,

current and past City Councils.  City councils comprised of elected officials more concerned with their relationship to the large campaign donors than

the interests of the residents they are elected to represent.  This must change; the overdevelopment cycle must come to an end.

Presented below are observations requiring our, the residents, attention and concern.  Politicians often use the rhetorical cliché of protecting our

‘children and grandchildren’.  This cliché has never been more apparent than in current day Boca Raton…Stop it now or forever hold you piece!!!!

Your vote is your voice; let your voice be hears loudly at the ballot box.

Cooking the Books     by:  Jack McWalter

As you may know, for the last two years I have been focused on schools overcrowding and why there is such a disconnect between forecasts and reality in Boca Raton.   Of the nine Boca schools, all except one are dealing with overcapacity.  Boca High School is over capacity by hundreds.  I have reviewed the Board of Education (BOE) official projections for last three years for Boca schools and they seem really low.  I compared the past three years’ projections to the present stats and have uncovered what appears to be a huge difference.

For a long time, I have suspected someone is ‘cooking the books’ but, until now, with no real evidence.

The agenda published for the Planning & Zoning Board’s (P&Z) meeting on January 18th contains two developments up for review.  The first is the 475 Royal Palm project in the downtown, adjacent to Silver Palm Park and boat ramp.  This is a residential project consisting of 48 high-end units, averaging 2800 sq. ft. with 4 to 5 bedrooms, family oriented, and office space.  The second is Camino Square, also in the downtown.  This is a 350 unit development with many 2 and 3 bedroom apartments, located at 171 W. Camino Real Blvd just west of the railroad tracks on Camino Real.  As a residential rental apartment project, it is suitable and appropriate for families with kids.

With my curiosity piqued, I decided to see if the ‘SCAD’ reports (School Capacity Availability Determination), required for all projects impacting school capacity, were in the City’s project documentation.  In fact, they were contained in the documentation for both developments.   These reports set the impact fees assigned to the projects based upon the projected impacts anticipated by the school board.

For the 475 Royal Palm development, the report suggests an impact on school capacity of 4 students for elementary, 2 students for middle school, and 3 students for high school.  The report (see below) concludes that the impact fee required totals $148k in impact fees from these 2800 sq. ft. apartments with families.

The 350 apartments in Camino Square development is determined to impact schools with 4 new students in elementary, 1 student in middle school, and 4 students in high school.  Impact fees for this project are set at $160k.

They have got to be kidding….

Both situations can only be viewed as massive misrepresentations, a fiction. 1 kid in middle school?  Give me a break!!!

This is the scam and the City Council is allowing it to happen.  The ‘developer friendly’ City Councils over the last 2 decades have refused to reign in Boca Raton’s overdevelopment; refused to oppose the diminished quality of life suffered by Boca residents daily.

The Board of Education accepts these residential development numbers; the city, however, ultimately approves each development to go forward.  Based upon these numbers the future school concurrency needs aren’t seen to be that big a deal.   These numbers are then fed into future projections by BOE staff and accepted, almost carte blanche by the School Board members.

Chuck Shaw, School Board Chair, Frank Barbieri, Boca Raton’s School Board representative, and others have told the City Council what the problem is – Residential Overdevelopment.  Boca Raton’s City Council apparently does not want to listen and has not listened for many years.  SCAD reports are available dating back years.  The numbers documented can only be viewed as fiction.

The first issue found is that impact fees are way too low to cover the cost of a student’s education over time.  However, the City Council, the developers, and the BOE are all responsible for not placing greater demands on the impact fee contribution.  All these interest groups are grossly underestimating our children’s future education needs.   If the Chuck Shaw and Frank Barbieri warnings are to be believed, their words support a building moratorium until our elected officials at the City Council and the School Board fix this eminent, ever-present school overcrowding crisis.

If not now, when???  All residents are impacted by this fiction; fraud.  All of us know others living in the city that need to become aware of this stuff.

After all, 38% of your yearly property tax bill goes to the School Board; let me say that again – 38%.

Pass this on; Send this to everyone you know!!!  Encourage them to contact their elected officials and demand change….

City staff has recommended denial for both developments; this is good.   475 Royal Palm, arguably, does not meet Ordinance 4035’s requirements.  Camino Square was rejected on traffic concerns.  Developer experts and attorney(s) will argue their case on the facts and on the law.  They will challenge City Staff’s conclusions and threaten legal action…. but… in the end, the City Council is the ultimate arbitrator for what is and what is not in the best interests of the residents.  Developer desires and profits are not the elected officials concern.

Attached below are the SCAD reports for these two projects.  There are interesting revelations when these reports are compared to one another.  The two projects are in the same school district and the report dates are with a few months of one another, yet the numbers reported as to existing capacities vary dramatically.  How does that happen? 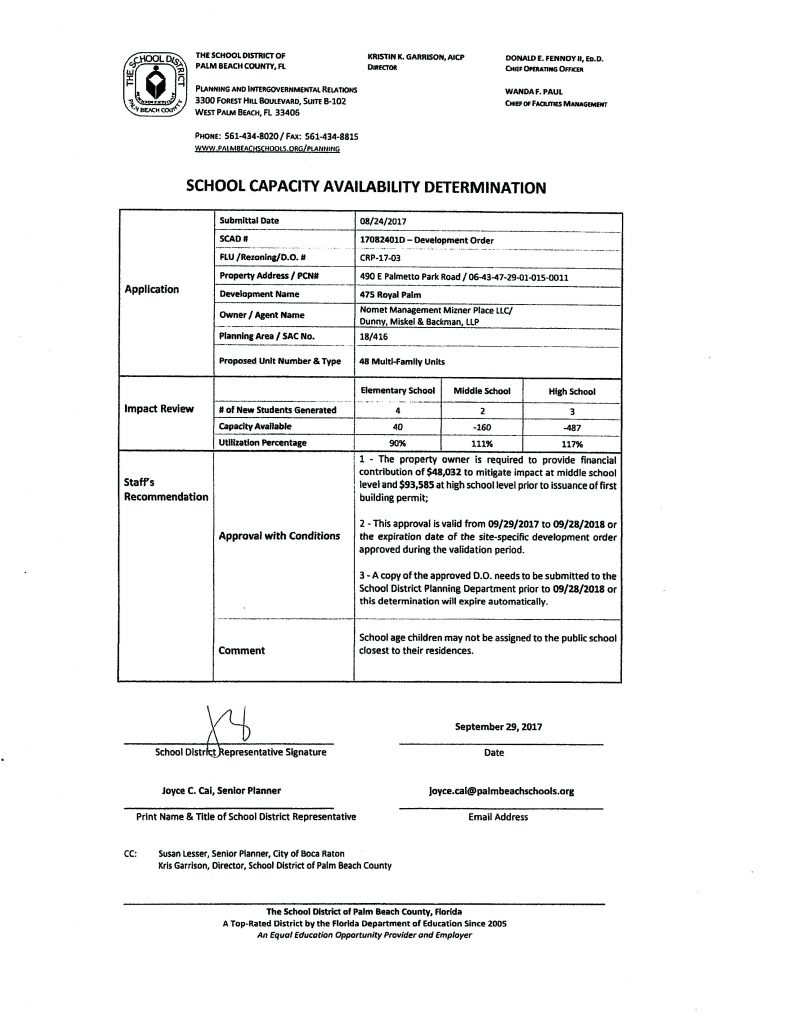 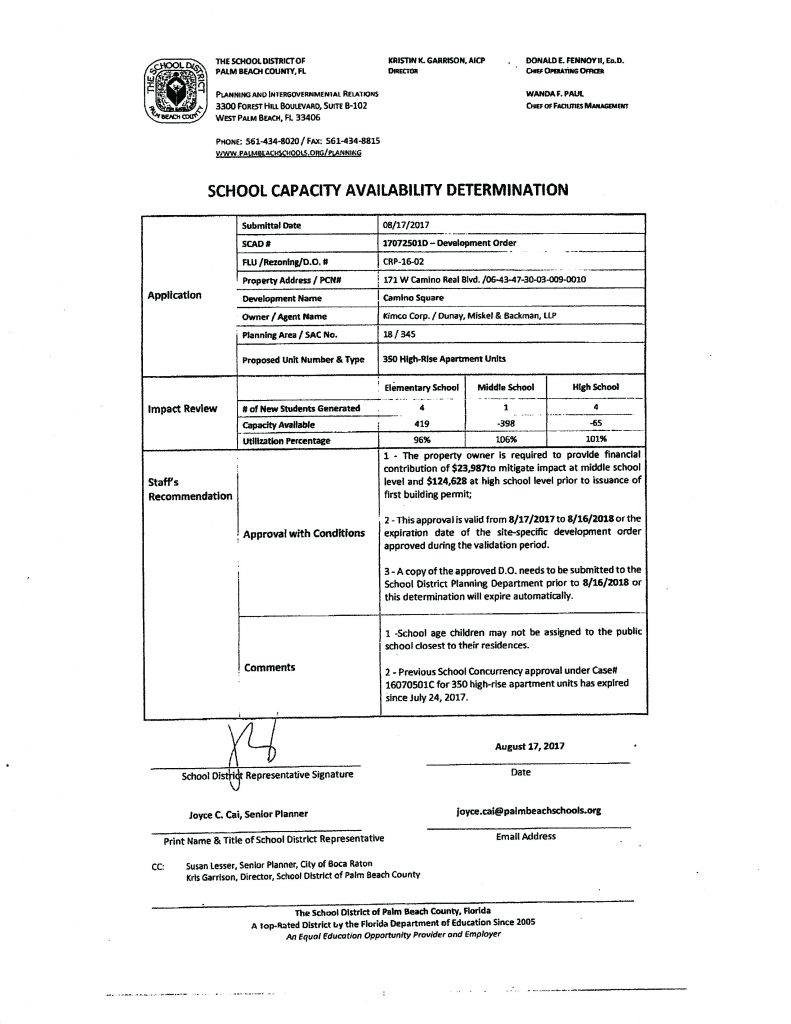 Based upon my research, these numbers are pure fiction.  They need to be challenged at every level starting at Boca Raton’s City Council; challenged by the residents; the parents and grandparents of children attending these schools and, perhaps more importantly, by parents and grandparents of children that may be forced to bus to other schools outside Boca Raton as a direct result of this school overcrowding; Overcrowding being a direct result of over development.

Remember your vote is your voice; let your voice be heard loudly at the ballot box in March 2018.

The only solution, the only path back to sensible, sustained growth, is to vote for the ‘Resident Friendly’ Candidate(s).