Some predictions do come true.  As predicted, Robert Weinroth withdrew his bid for re-election as a City of Boca Raton City Councilmember and set his sights on a higher goal as he then filed to run for Palm Beach County Commission District 4.  One can only imagine the conversations taking place among Boca’s political elite since Weinroth has calculated it is in his best interest to run against his closest ally on Boca’s City Council, Mayor Susan Haynie.

No Doubt the City Clerk’s office was abuzz with activity on January 9th and 10th once the word was out on Weinroth’s decision.  New candidates rushed to City Hall to submit their paperwork in time to meet the candidate qualifying deadline of January 10th, while already announced candidates were also required to submit final qualifying paperwork plus their campaign finance report for the month of December by the same January 10th deadline.  With this information, we now take a closer look at what the numbers mean.

Some Clarification is Necessary

Mr. Weinroth’s December report represents funds raised as a candidate for City Council.  Therefore, his funding will be shown as such for this analysis.  In subsequent BocaWatch articles on campaign finance, his funding will be categorized under the county commission race.  It will be interesting to observe how much of his existing funding will carry over to his new campaign since donors will have an opportunity to take back their contributions.  Many of those donors are also supporters of the beleaguered Mayor Haynie.  More on that in reports to come.

Meanwhile, a total of five new candidates have filed paperwork to run for office in Boca Raton.  None of these candidates submitted campaign reports for December and are not part of this analysis.  The next campaign finance report is due February 10th and BocaWatch will provide a revealing analysis at that time.

December Was a Slow Month

As you may expect with the holidays, year-end charitable giving, travel, and focus on family and friends, not much money was directed toward campaign funding.  In fact, all five candidates raised a combined total of less than $23,000 with Mr. Weinroth taking in $10,550 of that amount, or almost half.  Here’s a look at where all our local candidates stood as of December 31, 2017.  Amounts indicated do not include candidate loans or contributions to their campaign. 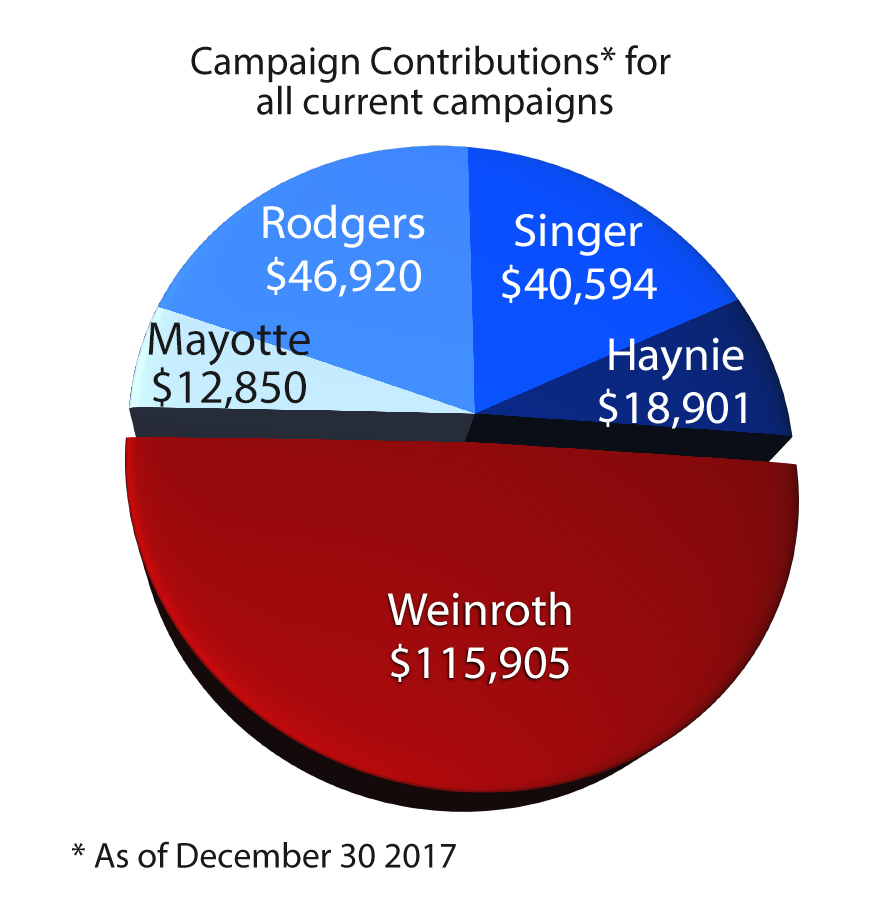 In this analysis, we have broken down the contributions into five categories:  Development Community, Legal, Other Business, Individuals, and PAC.  The Development Community includes, but is not limited to:  Construction and trades related; Architect; Real Estate; Property Management and Leasing.  Other categories are self-explanatory.  BocaWatch felt it necessary to establish Legal as a category since a significant amount of contributions comes from land use attorneys and other legal practice areas that benefit directly from development in our city.

Here is the current breakdown of sources of funding for each candidate: 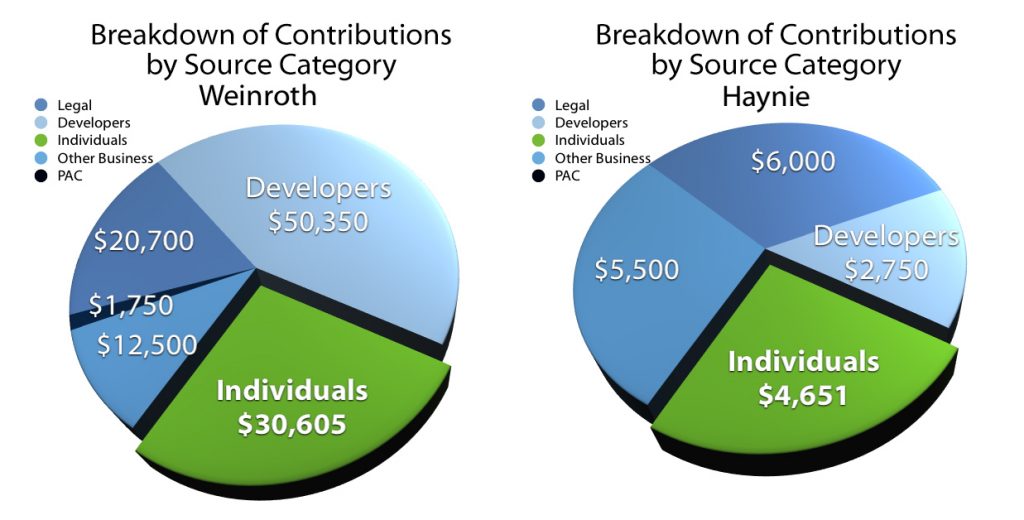 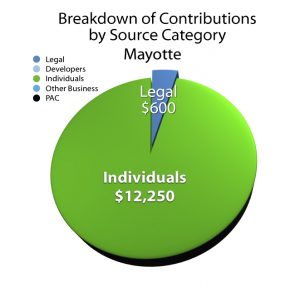 And Then There is Bundling

In an effort to level the playing field and limit the financial impact one person may have on an election, our current law limits campaign contributions to $1,000 per individual or entity.  So, what happens when you are a major developer with multiple projects and have future items that will come before a government agency?  What happens when you are a land use legal firm and repeatedly represent your clients in front of CRA or Council?  How can you gain advantage?  Try bundling.

Bundling, in this instance, is the process of combining similar sourced money from different entities in order to contribute more than $1,000 worth of influence.  Here are two real life examples:  Group P6 has several different development LLC’s.  These entities are controlled by the same principals as the project 475 Royal Palm Rd which is coming before the CRA within the next month.  The related entities have contributed $5,000 to the Weinroth campaign and $5,000 to the Rodgers campaign.  That $5,000 represents more than ten percent of the cash contributions received by Mr. Rodgers through December 31, 2017.

Another example:  The legal firm of Dunay, Miskel, Backman has been prominent at city hall with Bonnie Miskel representing many projects that come before the Council or CRA.  Ms. Miskel, her partners or related entities, have contributed $3,500 to the Weinroth campaign, $1,500 to Rodgers, $2,000 to Scott Singer, $2,500 to Haynie and $0 to Mayotte.

There is nothing illegal in this, but it does tell a story.  That story will further develop when 475 Royal Palm Rd is voted on.  The development community has made it a priority to ensure that they can secure three votes on city council to enable their interests to move forward.  They hope to do that through aggressive campaign funding.  It’s time for the residents of Boca Raton to ensure that their interests are moved forward and they can do that with something much more powerful than money – their vote.  Placing a resident friendly candidate in office accomplishes that mission.