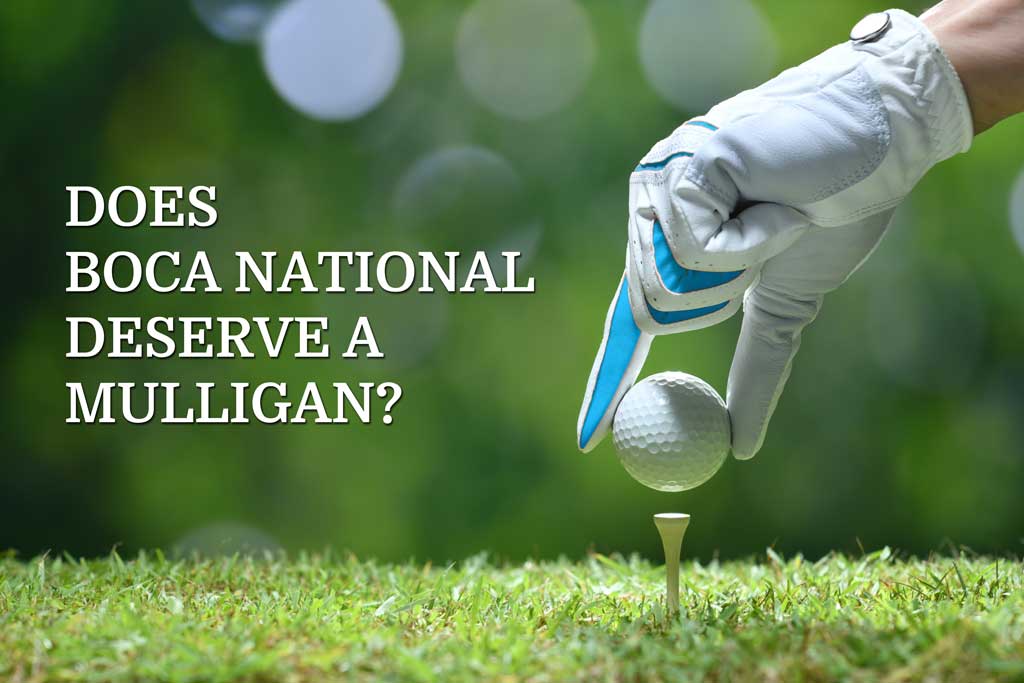 One of the quirks of golf is the “mulligan” – the do-over for a bad shot. Although outside of the rules of golf, it’s nevertheless a well-accepted courtesy in amateur play; amateur play being the operative phrase with the negotiations to date.

The last few rounds between the City and the District over Boca National have been witness to numerous possible mulligans in both chambers.

At the July 24 City Council workshop attended by District Commissioner Ehrnst, and at the City Council meeting the next evening, Council Members took swings at the particulars contained in the District’s design plan with, the City Council, seeming to lean towards approving the plan.

The workshop was the longer of the two ’rounds’ at City Hall. It seemed clear that each of the Council members was finally engaged in the design’s details; an advancement that Commissioner Ehrnst had requested the previous month.

This potential advancement was evidenced from the Council members:

Right now, the City Council does not have any money in the project except for holding the note from the District to purchase the land on the west side of Boca Raton Blvd. The District being obligated to make annual payments to the City.

Council seemed to still have reservations whether to participate financially with the District by approving such a grant.

Their considerations seemed to revolve around the following points:

Let’s hope the City Council does not decide to hire a ‘consultant’ for this advice. That’s a sure guarantee of adding years to the projects timeline ….

Staff has been instructed to issue a Request for Information from interested golf course designers on the following:

Staff input to include:

City Council members expect to hear from responding designers at the next Council workshop on Monday, August 26.

It was then the District’s turn to considered taking their own ‘mulligans ‘at its Special Meeting on July 25.

Like any golfer disappointed with the ‘lie’, there were initial comments ranging from the hazards of playing in City Hall – to complimenting the good swing by Commissioner Ehrnst even if they are ‘stuck in the rough’ moving forward – to lamenting that they could have been in a better position now if they had ‘tee’d off’ earlier to involve the City.

Then the District Commissioners got down to considering their next play. They agreed, with varying degrees of optimism, that the City’s participation would be better than no participation – subject, of course to the demands.

There was unanimous consensus on the following:

The District Commissioners would use the next several weeks to explore financial options available to proceed.

They have retained an independent certified financial/bond consultant to explore non-City financing packages and costs. Following a presentation by Merv Timberlake, the District’s Financial Adviser, on mileage rate increases and how much additional revenues would be generated, the Commissioners declared a millage rate of 1.196 mills to send to the Property Appraiser to notice all District taxpayers.

So, there are ‘mulligans’ in the making for the City and the District

The City can either:

NOTE: City approval of the design cannot be ‘unreasonably withheld’ according to the terms in the interlocal agreement covering the District’s purchase of the property on the west side of Boca Raton Boulevard.  Since the City Council’s reluctance to approve the design has been primarily based upon financial objection, if the District goes forward without any City funding, Council’s concerns about financial considerations are mute.

The District can either:

Finally, the morning fog is lifting off the course of action for Boca National.

There are still some shots to take over the next 2 months, but it looks like ‘Golf in Boca’ may have taken a serious step forward and may, the operative word being ‘may’, happen after all…say the eternal optimist….Of course…When. is the open question!!!