With the candidate filing window now closed for the March 2018 City Council elections and the candidates known, the future impacts of Midtown Boca may be be decided with input from new voices not currently on the City Council. One item of particular note about the newly announced candidate, former Council member and Deputy Mayor Mike Mullaugh, is whether he will have to recuse himself from any Midtown Boca votes if elected. Why? Because….He comes to the table with a demonstrable history and a predetermined position on the merits of the Midtown proposal.

In the January 8th presentation by Development Services Director Brandon Schaad, one piece of evidence submitted in the official record establishes that in  2016 then Councilman Mullaugh sponsored the Midtown Landowner Proposals. (See exhibit below) 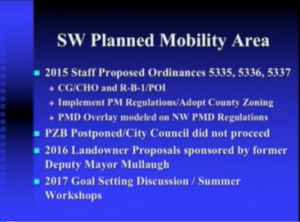 This circumstance ought disqualify him in any Midtown quasi-judicial matters; such a predetermination is prohibitive and requires recusal to avoid creating a legal challenge depending on the outcome of future items for the Midtown project.

CAVEAT: It never ceases to amaze me the insidious, incestuous nature between the elected officials and developer interests that has existed in Boca Raton for decades. To break this stranglehold, vote for the ‘resident friendly’ candidate.

The Advantage of Resident Friendly Representation on City Council

This past Monday, Boca Raton City Council heard the first of two required public hearings regarding the potential rezoning of the massive Midtown area.  The next hearing for Midtown is set for the regularly scheduled City Council meeting on January 23rd at which time the Council will vote on several proposed ordinances that dramatically change this approximate three-hundred-acre area which includes Town Center Mall, Glades Plaza, Boca Center and other adjacent properties.  These proposed ordinances are a collaboration of City Staff, Planning and Zoning Board, and Midtown landowner representatives, with City Staff providing the original language and therefore most input.

As the two hour thirty-minute presentation and discussion unfolded it was apparent that a good portion of the effort was dedicated to the number and size of residential units and the allocation formula of the units among the various Midtown land owners.  Even the market study presented by a firm hired by landowner interests, appeared to, predominantly, focus on the justification of number of units.  That market study was specific to Midtown geography and not city-wide.

The Value of a ‘Resident Friendly’ Voice!!!

A video is worth more than a thousand words as to the intent and impact of a resident friendly councilmember as shown in the evening’s excerpt demonstrating interaction with city staff and the councilwoman in the 3 minute speech below:

Ms. O’Rourke has steadfastly, over many months, requested that a Master Plan for the entire sight was a necessity prior to a zoning approval.  As a result of Ms. O’Rourke’s efforts, the conversation regarding a market study covering the entire city, as required by City Code, became the discussion’s focus; without such focus, the matter would have likely been simply ignored.

All city communities need this type of representation; a councilmember that asks the hard questions, the resident friendly questions, protecting our quality of life as opposed to the pecuniary interests of the developer.

In Boca Raton, for the most part, residents have but one true resident friendly voice among the five elected officials.  Others want to argue their resident friendly bona fides but arguably leave a lot to be desired when their voting records and financial disclosure reports are put under the microscope.  Developer friendly positions become apparent under such examination and will be demonstrated specifically as the March 2018 elections approach.

All other four city councilmembers are currently running active campaigns for various offices and may be reluctant to make the hard decisions, or direct the conversation to areas that benefit residents but threatens to negatively impact their donor base.

Below is another excerpt from this week’s lengthy council meeting on the Midtown development proposal.  This  one minute excerpt is of the Councilwoman’s closing comments on the matter.  Resident interests are front and center.

The Midtown Proposal is scheduled for a City Council vote on January 23rd.

Between now and then, residents must communicate to the City Council their feelings and concerns for public safety, density and quality of life matters.

Below are the City Council members email addresses.  Let them hear you loud and clear….Plan on attending the January 23rd Council meeting to voice these concerns and finally, if the Council is unresponsive to your concerns or disregards the residents’ issues of importance, remember…

Your vote is your voice; let your voice be heard at the ballot box in March 2018.

As the elections approach, BocaWatch will provide candidate profiles and interviews designed to provide you, the voting public, with information beyond  slick campaign literature; information to allow you to make informed decisions on which candidate will preserve and protect the essence of Boca Raton and the quality of life that makes us so special.