Following up from the April 9th Planning and Zoning Board meeting, an open question remains to be addressed. The question raised was to inform the public on what the City’s procedure or practice is when a member of a quasi-judicial board, Glenn Gromann, publishes on social media a demonstrated bias to the outcome of a matter foreseeably coming in front of the Board.

The Assistant City Attorney, that evening, was unable to advise on the correct course of action and stated to the Board that she would research the law on the issue and get back with a ruling. She did not stop the board from hearing testimony on the issue which resulted in a split vote, 4 – 3, with Mr. Gromann actively influencing the outcome. Nor did she advise that the law in Florida indicates that an evidentiary hearing can be held to determine the bias or prejudice to disqualify the member or receive a voluntary recusal from the member before evidence is taken on the matter.

Thursday, last week, was the very first hearing by the P&Z Board since this question was poised. The May 7th meeting came and went without the Assistant City Attorney presenting her findings. No comment has been given by the City Attorney’s office and no memo of law has been presented in answer to Mr. Wood’s request for Mr. Gromann’s recusal.

Why not…..silence is an unacceptable outcome…..

Presented below is a memorandum of law outlining the current state of the law in Florida. This memorandum has been prepared at BocaWatch’s request by Attorney Ralf Brooks, Board Certified in City, County and Local Government Law by the Florida Bar

Madam Attorney, Mr. Gromann should have been removed or, in the alternative, he should have voluntarily recused himself from participating…..

If this is correct, than an appropriate course of action would be to negate the recommendation and send the item back to P&Z for rehearing without Mr. Gromann’s participation. 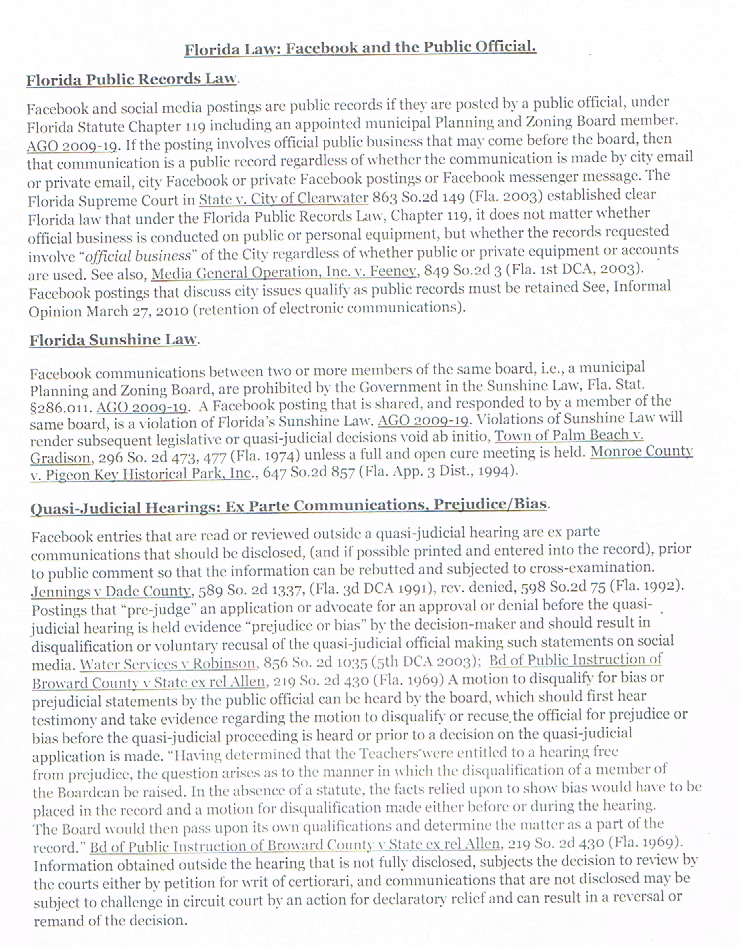 Having said the above, the practical effect may be pointless. Because the P&Z Board is an advisory board which simply makes a recommendation to the City Council, a reviewing court, without more, probably would not send this back for a remedial hearing.

Attorney General Opinion 08-07 states “While there is no statutory prohibition against a city council member posting comments on a privately maintained electronic bulletin board or blog,….members of the board must not engage in and exchange or discussion of matters that foreseeably will come before the board for official action. The use of such…postings….could easily become a forum for members of a board….to discuss official issues which should…be conducted at a public meeting in compliance with the Government in the Sunshine Law.”

At best, the practice of a quasi-judicial board member commenting on an issue that foreseeably is to come in front of the board should be frowned upon and prohibited.