How the City of Boca, Mayor Singer, George Brown, Commissioner Weinroth and the County of Palm Beach are affecting the lives and security of over 2000 residents in 12 Boca Raton-Unincorporated PBC communities, due to distances of Fire & EMS responder stations.

After interviews with both Boca and Palm Beach EMS personnel, it was agreed by all (EMS) that the fact that these Boca communities are 1.9 miles from EMS services,in a modern multimillion dollar station yet these residents must rely solely on Palm Beach County’s EMS stations which are over 7- 11 miles away, due to “Unincorporated status” of the Communities, which are within Boca Raton’s Zoning!

Furthermore, the Palm Beach County EMS Station, is usually unmanned, and antiquated  due to having only 3 people on staff, one fire truck, and one ambulance, and if they are out on calls, EMS services must come from as far as 11 miles away. 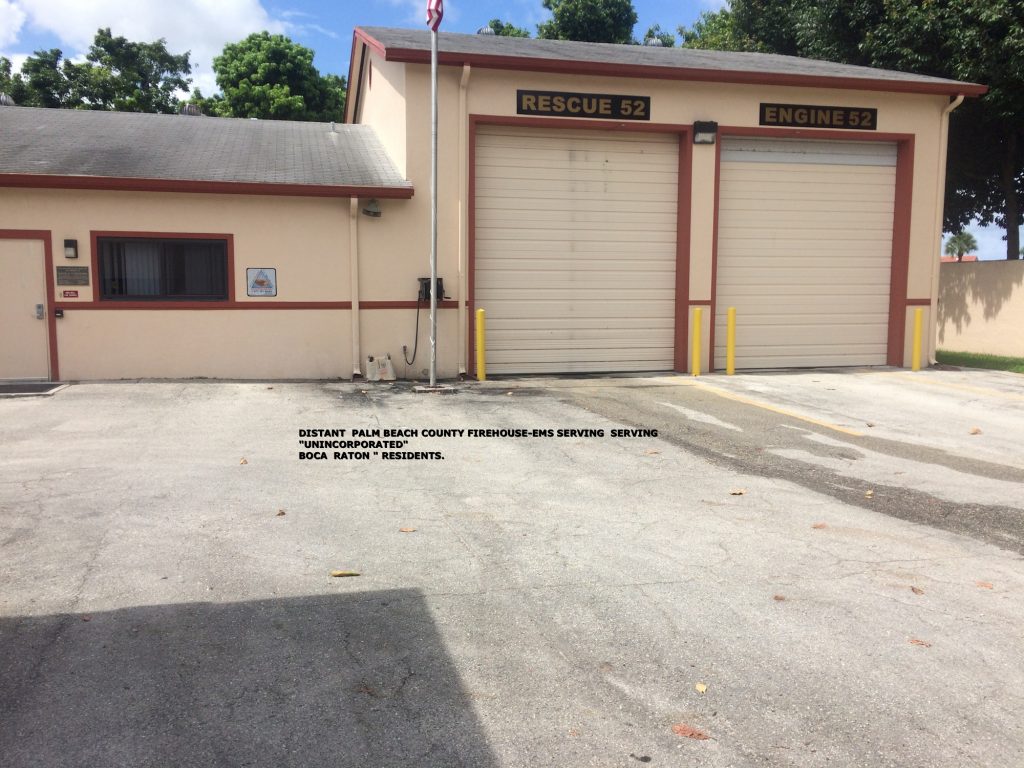 Below is one of the many correspondences which are still unanswered and unresolved since last year , after several emergencies which included myself (Heart Attack) And had to wait over 20 minutes for EMS to Arrive due to zoning logistics.

Regarding your response below to our correspondence of June 26, 2019, concerning the dangerous situation affecting over 3000 residents in 12 communities who are unable to obtain proper EMS services from the nearest Fire Station, and which you stated (Incorrectly) that the nearby Firehouse-Ems could not handle such calls, proves to be patently false- I After my on-camera interviews with your own Boca Firemen and Rescue squad personnel , who directly contradict your statement that “It would negatively Impact the City’s ability to provide services to Boca Residents “ From my months of conversations with The County of Palm Beach, there is agreement among Firemen, EMS, and other rescue personnel, that these services must be updated ,and must be coordinated with The City of Boca Raton ,which is imperative in resolving this situation. Especially as it is affecting peoples safety and lives on a daily basis.

This article by Mr. Weinberg highlights the confusion around “what is Boca Raton?” Elected officials seem to favor the idea of the City Boca growing upwards towards the sky, but not outwards to encompass our neighbors to the west, who for lack of a better name, call themselves “Boca Raton” too. Since they get the benefits of the “brand” yet pay for something different entirely, shouldn’t we re-invigorate the debate to #AnnexWestBoca ???