Home Boca Raton Development How do Residents find out About Proposed Developments?

Finding out about proposed developments in Boca Raton is trickier than you would think. Residents sometimes wonder if the process is made to be overly complicated to turn average citizens away from participating in government. This is not new by any means in the world of government and politics. It sometimes feels like a big wall has been built between the average voters and our government leaders.

The process is cumbersome and usually takes a legal degree to fully understand. But special interests figured this out a very long time ago. Just look at the hundreds of environmental organizations, for example, helping to translate public policy to average citizens so that they can respond by signing petitions, calling their representatives, or other means to impact a policy decision. Similarly, right here in Boca Raton we must rely on government watchdogs like BocaWatch to peel away the true meaning of legislation put forth by the City Council. Without groups to translate the legalize to us, we would really be left in the dark.

There are some steps that you can take on your own to track new development projects in Boca. If you call the City Clerk’s office they will walk you through several ways to track proposed ordinances on the City Council’s agenda. It really does sound simple—and there are some great resources—but it still takes a bit of work to figure out exactly what is going on and how it will impact us as individuals.

The first step in learning which projects are underway is to visit the City of Boca Raton website (which has been newly redesigned and updated) and scroll over Government. Then choose Development Services. Then under the header Common Requests, click on See Proposed Projects Under Review. You will have access to a list of project applications, although it is somewhat confusing because it does not appear to be in chronological order by date.

Then next step in gathering information is to view upcoming agendas and minutes of past meetings. This can easily be found if you scroll over Government from the home page and then click on Agenda and Minutes on the left-hand side of the page. You can read through agenda items to try to identify projects being discussed, particularly on the Planning and Zoning Board agendas. One trick is to look for an address on the agenda to indicate that it is indeed a project being considered. If you have trouble understanding it, do not hesitate to call the City Clerk’s office at 561-393-7740 for an explanation.

Also keep in mind that if a project is being considered within 500 feet of where you live, you will be notified by mail two weeks prior to when it will be discussed at a meeting.

Residents currently have two ways to express views on a new development. You can speak in person at a City Council meeting or Planning and Zoning Board meeting during the public comment period. Each individual is allotted five minutes to speak. You can also submit your public comment in writing. You can send your message directly to the City Council and/or specific board members, but the City Clerk representative also suggests that you submit your comments directly to the City Clerk to ensure that it is entered into the official record. This important email address is brcityclerk@myboca.us.

However, is this enough? Council Member Scott Singer recently suggested adding an electronic public comment system to the Boca website. This is a great idea and would allow more residents to easily submit their comments on proposed development projects, among other issues as well.

Are Projects Purposely Being Rushed?

The biggest concern about the way the development proposals are presented is that it appears at times that the process is being rushed so that residents miss what is happening and do not have ample time to provide their input. Residents approved the Comprehensive Plan so the City Council has a framework for decision-making. The City Staff, however, works with developers on changes to the Comprehensive Plan and the residents are not provided an overview of the changes and sufficient time to understand them. The first time residents become aware of proposed changes are when the detailed changes are presented to the P&Z board for review and approval.

The Archstone Palmetto Park apartment project (now called Palmetto Promenade on East Palmetto Park Road) presented in 2012 is one example of this. Within five days, the Planning and Zoning board approved the proposal and then the City Council approved it. Hours after that City Council meeting, residents were finally able to voice their concerns at the Community Redevelopment Agency (CRA) meeting. They were able to slightly delay the process, but then the CRA prohibited any additional public comment during that meeting. Ultimately, it was approved less than two weeks later. How is this providing adequate time for the public to comment on a new, massive project? Following is a timeline of Archstone approval dates. Note the fast-tracking of approval milestones in the red text. 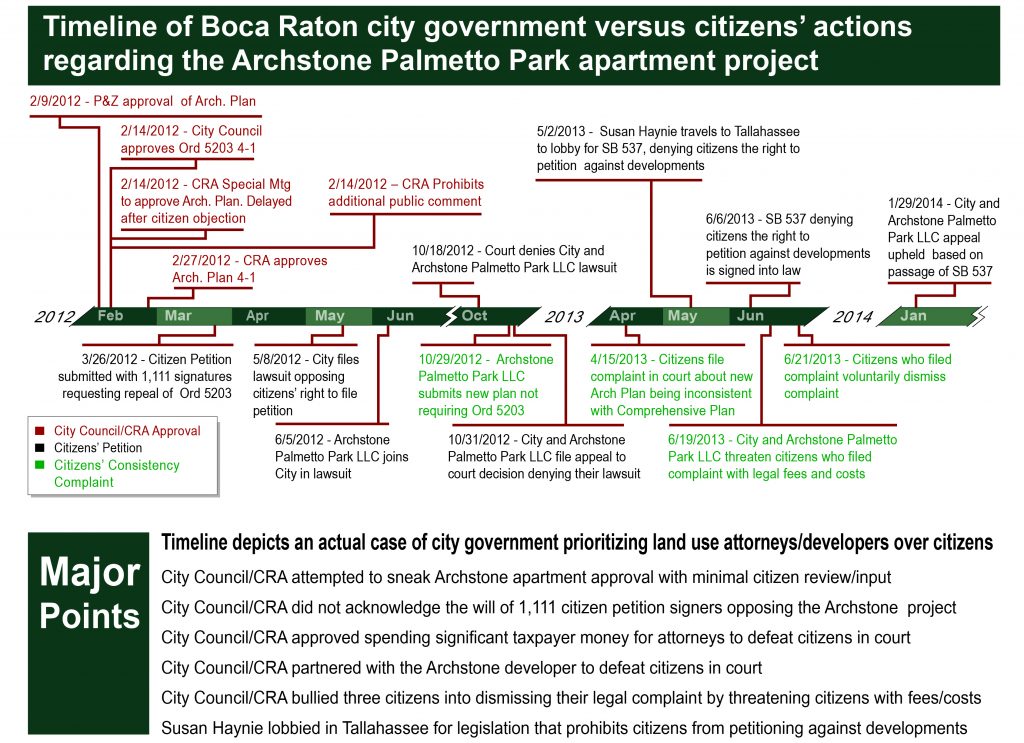 A similar situation recently occurred a few days before the December holidays when the Planning and Zoning Board scheduled a discussion and potential vote about changing the zoning to pave the way for the Midtown project on Military Trail. Because Boca Watch was available to the public as a watchdog, several residents expressed their concerns about the timing of this meeting. Although the meeting proceeded, it was acknowledged by the board that many people could not attend the meeting, including one of the board members, due to the timing before the holidays. Therefore, the vote was postponed. This shows how critical it is for residents to speak up when these situations arise.

Additionally, even a member of the Planning and Zoning board commented that the process seemed too rushed. He said that the board was not given sufficient time to review all the complexities of the project documents pertaining to Midtown. If the experts on the board felt rushed, what about the average citizens of Boca Raton?

The election is just a few short weeks away. Candidates are looking for ways to stand out. Many of them are talking, again, about improving government transparency and working for the residents. Here’s your chance to speak out now and force them to commit to making some effective changes moving forward so that all residents can stay in the loop about new development projects.

Ask for the following:

The most effective way you can help fix this problem is with your vote on March 14th. The current City Council members have had years to get this right and have failed. Vote for resident friendly candidates on March 14th.