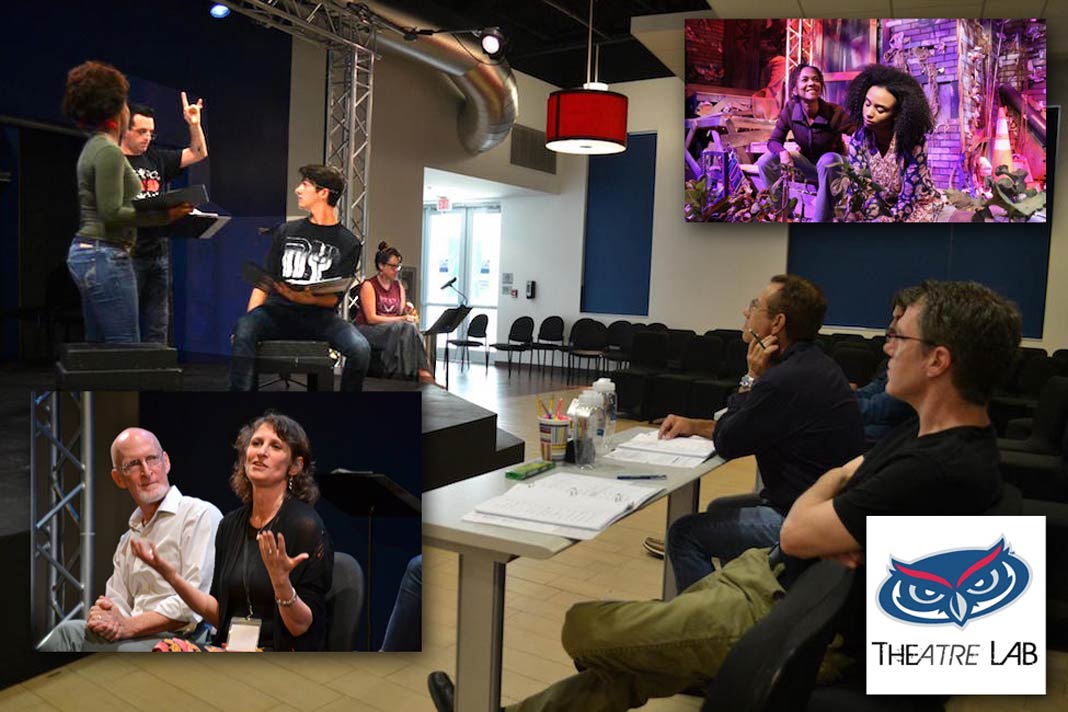 To most theatergoers, the rehearsal room is a mysterious place. Secluded, sealed off from the public, only for actors and the creative company, which are responsible for in which a production will emerge. Behind the curtain of the rehearsal room, young actors and actresses prepare for their next on-stage production. They stand tall, singing smooth, clear, and with the swells of power rising in their throats. It is a promise of tomorrow. Louis Tyrrell, the Artistic Director of the Florida Atlantic University Theatre Lab, says, “This is just a little something, you haven’t seen anything yet.”

The Florida Atlantic University (FAU) atmosphere offers a large variety of academic programs and events to choose from, one of those events being the multi-award-winning FAU Theatre Lab. Since 2015, the FAU Theatre Lab has been the professional theater department of FAU. Theatre Lab is part of the College of Arts and Letters and is for those who wish to pursue a professional career in the world of theater. Students, professional artist, and theater-goers now have the ability to mix-and-mingle while providing quality shows for audiences.

The fresh sunlight sways across the serene water surface, and the wind causes the flow of water to gently hit the glossy green grass. The sunlight reflects off nearby buildings as you cross the bridge. Once you’ve crossed the bridge you’ll be on a walkway. A walkway filled with students, some drinking Starbucks iced coffee trying to cool off from the early signs of summer heat. The walkway leads to a building with its beautiful red and white design and shaded patio. This building is the FAU Theatre Lab.

Even though the theater industry and entertainment are changing, Tyrrell believes, “Live Theater is a three-dimensional experience. Being in the same room as the artist performing the story at the moment, nothing can replace seeing that live and in person.”

A moment where everyone feels thrilled in a refreshing atmosphere, feeling the vibration of the actor’s voices, and you feel the real emotions of characters on stage.

Tyrrell has been a theater enthusiast since he was a young kid, he believes theater audiences are changing and FAU Theatre Lab is helping to bring in that change. Tyrrell’s turquoise eyes light up and the excitement wires his body when he says, “Audiences nowadays want different things. They want to be entertained but also enlightened and have life questions be addressed or asked, in order to help them think outside the box.”

Thought provoking plays such as the musical ‘Cuban Courage’, a story paying tribute to historic struggles for freedom and cultural acceptance. Or Deborah Zoe Laufer’s ‘Be Here Now’, a story focused on life and the pursuit of happiness. Tyrrell says, “Thought-provoking plays are what we like to do because it’s entertaining and it can be a window into our souls and hearts.”

In addition, Tyrrell is an actor, but he has also taken a seat in the director’s chair. Tyrrell continued by stating that it is a good idea for a director to have tried acting because directors become better communicators with actors.

Acting on screen versus acting on stage has some similarities, but differences. Tyrrell says, “Most actors start out on the stage, the theater is where you learn the basics of acting, learn all your skills, and expressing your body movements.” “Films have a lot of close-up shots, which require actors to give facial expressions. But theater is where you learn to not only express your whole body but you learn how to be in the zone,” says Tyrrell.

Theatre Lab has gotten rave reviews from the ‘Palm Beach Illustrated’ along with other local publications. However, Tyrrell explains that “The imagination, the characters, the style, all of these are choices the director has to make with the help of their creative team.” Theater production is a group affair and Tyrrell has quite the creative ensemble.

When Matt Stabile isn’t typing away at his TIE fighter designed laptop or thinking about new ‘Star Wars’ flicks such as, ‘Solo: A Star Wars Story’, Stabile is the Associate Artistic Director for Theatre Lab. Stabile, who has been interested in theater since he was 12-years-old, is responsible for the artistic direction of productions, what plays Theatre Lab showcases, and overall a big player in the production process.

Local theatre scenic designer, Michael McClain, is well-known for his dazzling sets and McClain has won various awards and honors such as the Scenic Design Critics Choice Awards. Stabile ended his comment by saying, “It’s all an effort, a team effort.”

If you’d like to get involved in FAU Theatre Lab or get more information on their three mainstage season shows, events, and tickets, you may visit http://www.fau.edu/artsandletters/theatrelab/, email theatrelab@fau.edu, or call 561-297-4784.