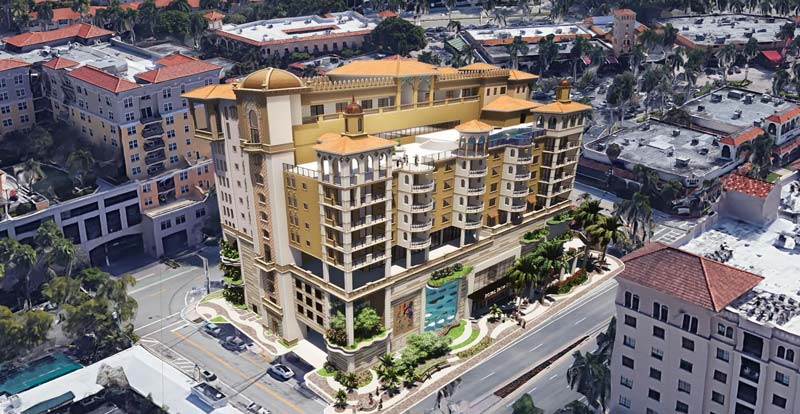 The Batmasian family have been and are a major influence on Boca Raton’s downtown landscape. Jim and Martha Batmasian relocated to Boca Raton in 1984 when they acquired their first 5 properties, properties they still own today, and have been influencing the downtown experience ever since.

Presented below is their next phase of Boca’s downtown evolution.

The Batmasian family, through their company, Investments Limited, will be submitting to the Community Redevelopment Agency, a downtown development plan for a small portion of Royal Palm Place. This redevelopment application, patterned after a European Renaissance Village, is remarkably woven into the downtown vision adopted in 2008; a Mizneresque vision, pedestrian friendly while contributing to the public experience, the public realm.

The story here is that this redevelopment seems to meet the letter and the spirit of the downtown vision captured in Ordinance 4035 and with the requirements articulated in the Interim Design Guidelines, and in the spirit of the Pattern Book envisioned but never adopted from the 2008 era.

This re-development plan goes much further with many contributions to the public realm as well as the residents and guest experience across the board.

Benefits that are described in the narrative below are capsulized with the following three statements:

If that is not enough, there is one additional element worth mentioning. This redevelopment’s business model is for an ‘extended hotel’ experience; a business product not available, today, in the downtown.

For my part, I would hesitate to bet against them…

The reader is encouraged to continue on with the below narrative which provides a deeper and more extensive vision for supporting public acceptance of this redevelopment project; a much better job than my opening efforts here.

…And now for the complete story….

In 1966, the Archer Family built Royal Palm Plaza (RPP). Since 1966, RPP has played a prominent role in the Boca Raton Downtown due to “appropriate size and character of public space and the character of the Architecture” (I.D.G. page A-1). Redevelopment of the Downtown into an Office/Financial Center was forecast by the 1982 Visioning Plan. The Batmasian Family acquired Royal Palm Plaza in 1988. By 1992, the Downtown DRI (Ordinance No. 4035) was adopted and redevelopment of the Downtown began. However, due to market forces, Boca Raton Downtown has today become primarily a retail, dining and entertainment destination with a significant residential component.

The RPP Hotel will be a mixed-use extended-stay hotel with retail/restaurant, parking garage and complementary public site amenities:

The single most important and challenging element of the redevelopment of RPP is parking. Parking was provided in the original 1966 Royal Palm Plaza building permits in accordance with the City Code then in effect. Since 1966 the City has, in the face of changing parking demands, amended its parking regulations several times to require more parking for retail, office and restaurant uses. As a result, RPP for many years has been operating under prior standards for parking. Despite that, and by careful management, RPP continues to be fully functional with the existing parking in place. However, parking management at RPP has become more challenging by the recent redevelopments to the north of RPP. These developments include, but are not limited to, Palmetto Place, The Mark and the Hyatt Hotel, which eliminated long existing parking at grade that was generally available to the public.

Ordinance No. 4035 provides “grandfather” protections for older existing projects. For example, the redevelopment of such older sites may comply “…with the parking requirement to whatever extent is possible.” (Ordinance No. 4035, pg. 23).  Despite this protection, The Batmasian Family is committed to improving the parking opportunities within RPP. Given the “grandfather” status of RPP, this is an entirely voluntary undertaking by The Batmasian Family.

Specifically, the RPP Hotel and all future RPP redevelopment shall both:

The RPP Hotel garage structure will add 390 parking spaces. In addition, the proposed demolition of existing retail/restaurant (approximately 13,000sf) will reduce the current parking demand by 222 spaces along Federal Highway, while only eliminating 15 street parking spaces, essentially improving the overall parking. The RPP Parking Management Program will continue to ensure an enhanced public parking experience as well as assist the parking efficiencies at RPP. Overall, the proposed RPP Hotel will reduce the current parking deficiencies by providing up to 171 surplus parking spaces.

Although on-street parking around the base of the RPP Hotel has been reduced by 28 spaces, those public parking spaces are more than compensated for by the surplus parking in the RPP Hotel Garage. This also provides improved traffic flow at street level, more direct access to the building for emergency vehicles, and better visibility for pedestrians as they cross the street.

The 60-foot right-of-way (ROW) for SE 1st Avenue along the east boundary line of the 000-200 blocks of South Federal Highway was platted in 1958 in the Royal Palm Civic and Shopping Center – Unit A Plat (“Plat”). The initial planning intent for the 60-foot ROW in the Plat has long ago become inappropriate for the adjacent properties. The RPP Hotel seeks to align the road with the city blocks to the north “to create a continuous and interconnected network of pedestrian friendly streets and public spaces…” by “…improved intersections, pedestrian crossings, sidewalk, and plazas…” (IDG Page A-1). With the proposed reduction of the ROW to 40 feet, S.E 1st Avenue will become consistent with the street profile promoted by the new redevelopment to the north. The realignment result from the requested City abandonment along the west side of SE 1st Avenue, adjacent to the RPP Hotel.  The ROW abandonment will accomplish the following:

The RPP Hotel development requires no transfer of Office Equivalency from other Sub-Areas.

The creation of pedestrian friendly streets and streets with character are paramount to the design and success of the RPP Hotel.  RPP Hotel proposes streets that are traffic calmed to improve the pedestrian environment and experience.  The changes include narrower streets, on-street parking, and tighter curb radii to facilitate shorter pedestrian street crossings.  As a result of creating an authentic space, deviations are needed Boca Raton driveway code.

The original Royal Palm Plaza, as well as the 000 and 200 blocks of South Federal Highway, were noted in the Downtown initial data and analysis leading to Ordinance No. 4035 as “retail high”. Indeed, on the adoption of Ordinance No. 4035 in 1992, these properties were typical suburban retail sprawl. That is, site specific retail destinations with little or no internalization and cross use. For example, what is now RPP-1 was once a 40,000 square foot super market occupied for many years by Wooley’s Market, which closed in early 2000. Royal Palm Place is now in transition from its old suburban sprawl hodge-podge of unrelated retail to the Downtown urban model of a self-sustainable, mixed-use community where people live, work and play in the same place. Typical of the 1960’s suburban sprawl, people from the nearby residential subdivisions made special purpose trips to one retailer at a time, say Wooley’s or Bennington Tobacco. As populations increased local traffic became a snarl. In 1992, Boca Raton and its Community Redevelopment Agency chose the mixed-use model as the solution to a Downtown, then no different than a large strip mall on a major thoroughfare. The result has been invigorating. With the introduction of the RPP  Hotel development, Royal Palm Place moves one step closer to the full realization of the Boca Downtown dream.

The Batmasian Family and Boca Raton

Over the next 35 years The Batmasian Family purchased and retained numerous real properties in Downtown Boca Raton including what is now Royal Palm Place.

The Batmasian Family stewardship of their Boca Raton properties is well known. Most of the major developers in the Downtown were not long-term residents but rather newly come to town, who bought, exacted an IDA approval, built and sold. The Mark being the latest in a long line of such developers. Rather, The Batmasian Family has, time and time again, demonstrated its commitment to quality development. Royal Palm Place will be a shining example of the development envisioned in the Downtown Master Plan, Pattern Book and Interim Design Guidelines.

In the early 1980 planning studies and reports that culminated in Ordinance No. 4035, the Boca Mall and Royal Palm Plaza were identified as the two anchors for redevelopment of the Downtown. The potential of the Boca Mall was realized with Mizner Park. Now, the potential of Royal Palm Place will be enhanced with the development of a new Hotel, restaurant and parking complex. The proposed RPP Hotel follows the current City ordinances as well as incorporating the revised IDG and Pattern Books, with the focus on enhancing the Public City Pedestrian Experience, consistent with the revival of the City’s Downtown and to rescue urban spaces for the public use.

This re-development project seems as close to the spirit and letter of the 2007-08 visioning sessions conducted with extensive resident participation. Other re-development projects have come along in recent years loosely interpreting the Boca brand; the Mizneresque look. This design seems to creatively incorporate a Mizneresque Renaissance Village concept, while others have not come as close;to wit: the Mark and the Hyatt

With its many elements contributing to the public realm; its enhancing the resident and visitor experience; its embracing the global attraction being sought for Boca Raton; and, its respecting of the traditional sense of place, the Boca Raton Brand, this Royal Palm Plaza re-development application, ought be embraced and encouraged….

You the interested resident will be the deciding factor. Give it thought…Your responses are welcomed…..

Best wishes to the Batmasians with this effort;

Best Wishes to the residents for insisting on preserving a sense of time and place that Boca Raton Raton has been known for; and…

Best Wishes to us all for the future enjoyment of this new public-private experience.