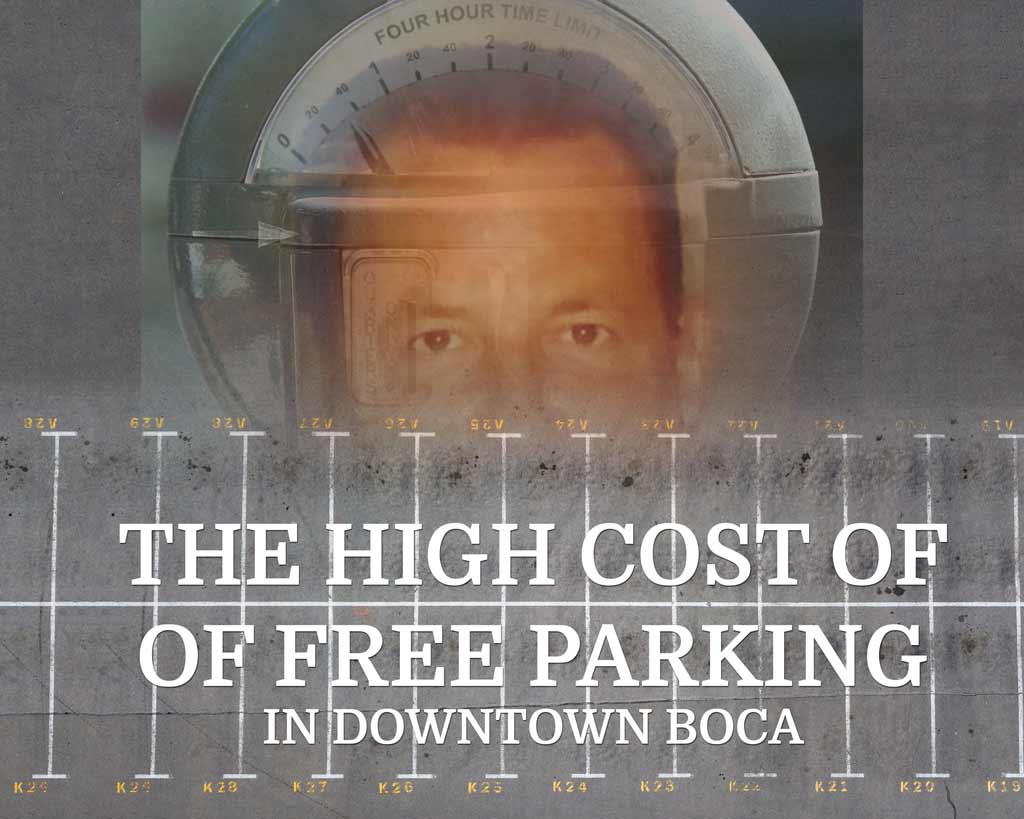 Below I have published last week’s email string between CRA Vice Chair Monica Mayotte and resident Glenn Gromann on the subject of parking meters in Boca Raton. This is provided for you, the interested resident, to view ‘good governance’ in action; a healthy dialogue between elected officials resulting in positive public discourse on an issue of great public importance; to wit: Parking.

Kudos to the entire CRA board for engaging in this public discussion. Thank you Glenn Gromann for providing the context and historical perspective for the CRA to discuss a policy designed to better the resident experience. Thank you Madam Chair and Vice-Chair for engaging in this dialogue and asserting leadership in what is one of the most pressing issues facing Boca Raton.

I enclose an article and one study on parking. As I have previously noted the book “The High Cost of Free Parking” by Professor Donald Shoup (2011) has been part of required reading for my FAU students. Recently I was able to make contact with him and we will be corresponding on Boca matters.

That being said while the Chair of Downtown Boca Raton Action Committee (DBRAC) I made a recommendation in 2014 (some 5 years ago) that all City parking spaces be metered with uniform pricing and time availability (i.e. maximum 4 or 5 hours permitted parking based on meter). That recommendation was based on unanimous vote of DBRAC members at the time.

Boca does not have a parking problem, it has a parking management problem. While the CRA is short spaces in the Downtown a uniform metering setup will drastically reduce the problem and to some extent traffic caused by “cruising” for parking. There are plenty of private spaces that can come online if the City implements metered parking everywhere.

In order to understand parking you need to understand that all Downtown Condos and Apartments are “grossly” over-parked. Most of the spaces are 30-40% vacant during the day/night for a number of reasons. If you count (for example only) 1.5 spaces for a 1 bedroom/2 bedroom apartment, for every four tenants that have one car that creates 2 unused spaces. While some apartments had ULI based technical deviations for parking (criticized) there are many spaces which in aggregate can’t be used…..

While Shoup goes into all sorts of complexity related to on-street parking pricing vs. off street and things of that sort all you need to know is that the City timed parking with the exception of the surface parking at Mizner Park and the limited meter area—IS FREE (at least for a few hours) but that restriction ends at 5PM!

While I can run numerous scenarios on how this system is fully gamed (and not in a devious manner) you should be aware that a substantial number of parking spaces (think Thursday through Sunday) are actually tied up and used by a combination of residents of the apartments/condos or restaurant (or other) employees. So long as you get a space by 3:01PM you are good till 8AM the next day. FREE. If I get home from work early on a Friday and am going to dinner with a GF, I don’t drive 4 floors to park in my garage spot, I park in a street spot–and even if there are visitor spots the GF does too if spaces are available. FREE. If I am running out to the grocery store in the AM/PM I just park on the street for 2 hours because it’s FREE. Further the people who live day to day in a particular area know exactly what spots are available and when. I invite you to sit and watch the spaces around the Mark and Palmetto Promenade, its plain as day—as is the science of free parking.

What this does is overwhelm places like Royal Palm Plaza and sometimes Mizner Park who then have valet taking various free non-City spaces which further exacerbates the overall parking problem. Meanwhile you have 30-40% of garage parking vacant…..because that is “required” for a demand that does not exist.

Almost every parking space on Royal Palm Road or 3rd or 4th Street are restaurant employees on a Friday and Saturday.

Metering ALL Downtown parking instantaneously forces people with garage spaces out of mix. That is a lot of people. It also forces guests to park in guest garage spaces. As far as employees are concerned it forces them to have their employer make some kind of deal to park them or better yet–Uber or get dropped off. The increased traffic related to “cruising” for parking spaces is established science. I notice that the second people cross Federal on Palmetto they go into a parking space crawl—especially if they are not familiar with the area. The Boca Downtown CRA is particularly well suited for full metered parking as there are defined and geographical borders which encapsulate the entire area. Delray Beach is not well suited as the Downtown sprawls everywhere and if you are willing to walk far enough you can bypass paid parking (their garages are $5 front-loaded.

Again uniformity is key I see metered spaces in CRA with a maximum time of 30 minutes? One block away its 4 hours. That makes no sense. If everyone knows the pricing and its uniform no matter where, they will know it’s senseless to cruise around looking for a better deal. Further is cost were front loaded say $5 for first hour then you would be uniform with valet. That means property owners could charge $5 for garage or surface spaces. No one is going to park anyone at an expense (hiring a lot attendant or buying a machine) if it can be bypassed.

Parkmobile (used in Delray) has an app to track every metered parking space.

Thus, you have a simple logical comprehensive solution to the parking issues Downtown.

Thank you for the valuable insight on our downtown parking issue. I own the book you mention and have been trying to read it as often as I have time. I agree with you that parking meters must be everywhere and uniformly prices. The fact that meters are currently sporadically located is causing problems for businesses located near the existing meters. Their clients are complaining about having to pay to park or park too far away for free parking.

The council just approved the purchase of 36 parking meters. Some of these will replace existing meters and the rest are new meters. I’m not sure how many of these will be new meters or where they will be located. I can find out if you are interested.

Have a great day.

From Glenn Gromann to the Community Redevelopment Agency (CRA) members:

Metering all City Spaces in the CRA was one of the best decisions the CRA has made and doing so in a cumulative fashion was better. Thank you CRA Chair O’Rourke an Vice –Chair Mayotte for taking a strong leadership position on this subject. It was refreshing and bold! Just plain old common sense decision making.

I wanted to make a few points on why the decision to do all of this at the same time was even wiser:

1. If you meter the entire Downtown you obviously get more revenue-faster! Positive present value of money! You also don’t lose the missed revenue on the non-metered parking spaces, if “area A” generates $400K in revenue and you double its size by adding “area B” that’s theoretically $400K more revenue 6 months faster than if you phased it? The economy of scale is the present value of money–equipment cost and install is incidental cost. Why would anyone do this halfway? Any free spaces that remain bleed the revenue stream.

2. The southern portion of town is already problematic due to new retail and residential, the Lennar “Lofts” project has its residents doing the same thing–tying up on street spaces. Via Mizner not that far off, Tower 155 will be online in December-January perhaps not a TCO but the streets and parking spaces will be reconstituted.

3. My prediction is that the new parking fields will generate a minimum of $1.2MM per year–easily. That builds plenty of crosswalks and lighting. This should greatly ease cruising traffic but only if the cost and timing of the meters is COMPLETELY uniform, minimum parking buy should be 1 hour. Everything should be timed 4 hours max.

I hope that some of this money will be used for beautification of the Downtown, specifically landscaping, really nice wayfinding signs (which help reduce traffic) and creating some pocket parks!