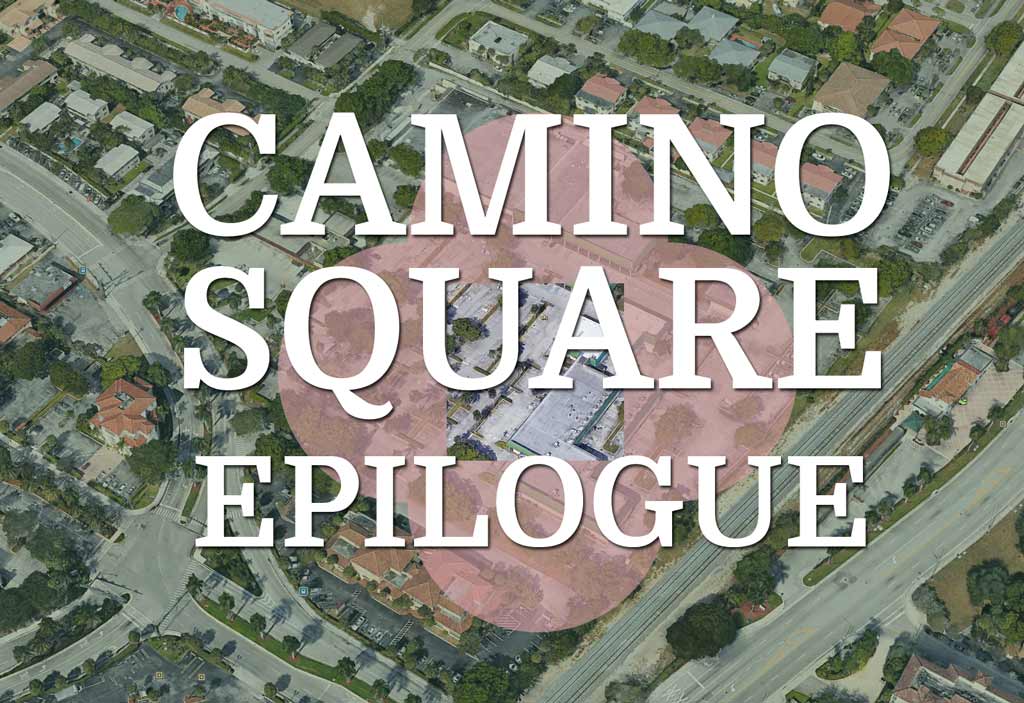 On April 8, 2019 the Camino Square project was approved by a 3-2 vote after YEARS in process before the City and after 5+ hours of mostly irrelevant testimony. Saved from itself and more litigation, City officials and project opponents had one last opportunity to expose themselves. And they did. While staff gets a pass because they are TOLD what to do, what to INVENT and what to SAY, for fear of losing their job, elected officials do not have that luxury.

High marks should be given to CRA Commissioners Rogers and Thomson for being expertly prepared to address the merits of this matter. Leadership means never having to apologize for a disciplined measured vote. Commissioner Scott Singer cast a positive vote; but with a contorted apologetic tone. He owed no one an apology for making the RIGHT decision. No one will question his vote when this project is built.

And how about that Jack McWalter fellow? As a “Bocawatcher” of yore, he certainly cannot be attacked as one sided or biased. Developers may not agree with him 80% of the time but no one can call him predisposed?

Watching Hypocrisy and Bias in Action—Add a Splash of Conspiracy!

Which leads us to the negative votes of CRA Chair Andrea O’Rourke and Vice Chair Monica Mayotte.

Clearly, their minds were made up long before the hearing started. Their predisposed questions and objections were transparent. The ONLY issue which remained after the January 7, 2019 CRA hearing was traffic—and nothing but traffic. That was the sole reason the decision was postponed; not to INVENT new rules and issues that did not (and do not) exist; and, were NEVER brought up before, like O&E conversions.

Amazing as it sounds the developer came back with—you guessed it–traffic solutions. Imagine that! They did what they said they would do and addressed the traffic situation to the tune of nearly $2MM in proposed off/on site road improvements and a commitment to continue finding solution to the bike lane issue.

The developer fixed a roadway congestion condition that the City, itself, created in 2015. The developer was not required to do this; the project was vested for traffic concurrency in the DDRI. And who cares if they get an impact fee credit on part of that? That’s money that would go to build roads in other places in the county. Some commentators have suggested a contorted blame to past CRA members for not making the road improvements in the past. Irrelevant. The developer presented real traffic solutions and a real level of service increase at the Camino/Dixie intersection—if, of course, you believe the traffic studies submitted. City staff certainly did; Palm Beach County did; the County staff did!!!

So what is a CRA member to do when the facts, standards and rules don’t support the desired outcome?

Well, simply make new rules that do; invent different standards, move the proverbial goal post, and then present comments as if an expert making sure to throw out talking points for the opposing audience to partake in a manufactured echo chamber. Also, question the motives of the developer’s traffic engineer as if he were lying or part of some grand conspiracy. If the true desire is to solve a traffic problem, why not solve it? Because, that was not the desire—the desire was to kill the project any way possible.

Traffic studies are done in a specific and disciplined way as per established rules.

Fact: Grade level train crossings are not counted or considered in County or City required traffic studies because they are deemed minimal impact events. That is the science and engineering behind traffic studies. CRA Commissioners should know better than to argue with the prescribed science; independent research with unidentified software does not a traffic expert make.

To have a decision made based on such comments would be another silly “Concierge” type statement creating reversible error.

Another commentator stated that O’Rourke and Mayotte voted in the negative and should be commended for keeping their campaign promises to oppose development. Two reasons undermine this posture; to wit: 1) As fact finders, politics need to be set aside; and, 2) this project had traffic concurrency within the DDRI. Of course a blanket “no” vote on a project–with no basis other than it was based on a campaign promise would be invalid ‘per se’.

Here is the bottom line:

It would not have mattered WHAT the applicant did or did not do with respect to traffic. Both Mayotte and O’Rourke were clearly opposed to ANY development, PERIOD! They were predisposed. They are clearly enlisting the City Attorney and staff (through the City Manager) to invent arguments for them; to wit: implementing the unspoken policy of limiting development through litigation.

This is exactly how our elected officials have dug the hole the City is now in with the Midtown debacle. With all the current litigation challenging the elected officials’ decisions and actions, such an unspoken policy is all going to come crashing down very soon.
Good governance requires action and the landowners are intent to resolve it. Hypocrisy—Boca Style!!!

What else to add to the Mix?—Why the dishonest media to be exact.

It should be noted that WPTV showed up to cover this “controversial” Camino Square project. ” Controversial” being the online headline. But what was controversial? The media were possibly biased by the project’s opponents and fed a (false) narrative.

Is a project that was vetted for years; that meets the requirements of Ordinance #4035; that has NO technical deviations or variances; that will likely triple tax revenues and will clearly fix a blighted property “controversial”?

Is a project that is VESTED for traffic concurrency where the applicant is making $2MM in road improvements they don’t have to do “controversial”?

Howling at the moon has changed the posture and practice of developers in Boca Raton. Local elections over the last 5 years have changed attitudes. Victory certainly can be claimed by the residents. Landowners have clearly altered their expectations and appear ready to, as in Camino Square, contribute greatly to the public realm.

Growth is inevitable…Growth that contributes to the public good is what the residents now can expect.

This attitude change has been hard fought but is fragile.

Now that the residents’ have the attention of the developer community, it is time to sit at the proverbial table and engage in FAIR and EARNEST discussions that result in the betterment of the resident experience. It should be noted that if Camino Square had not been approved the resulting litigation would likely have ended in favor of the developer and WOULD NOT have required the agreed roadway improvements. How would that help anyone?

Negotiating with the developer for the betterment of the public good is the ‘resident responsible’ thing to do.

This is the definition of Good Governance.