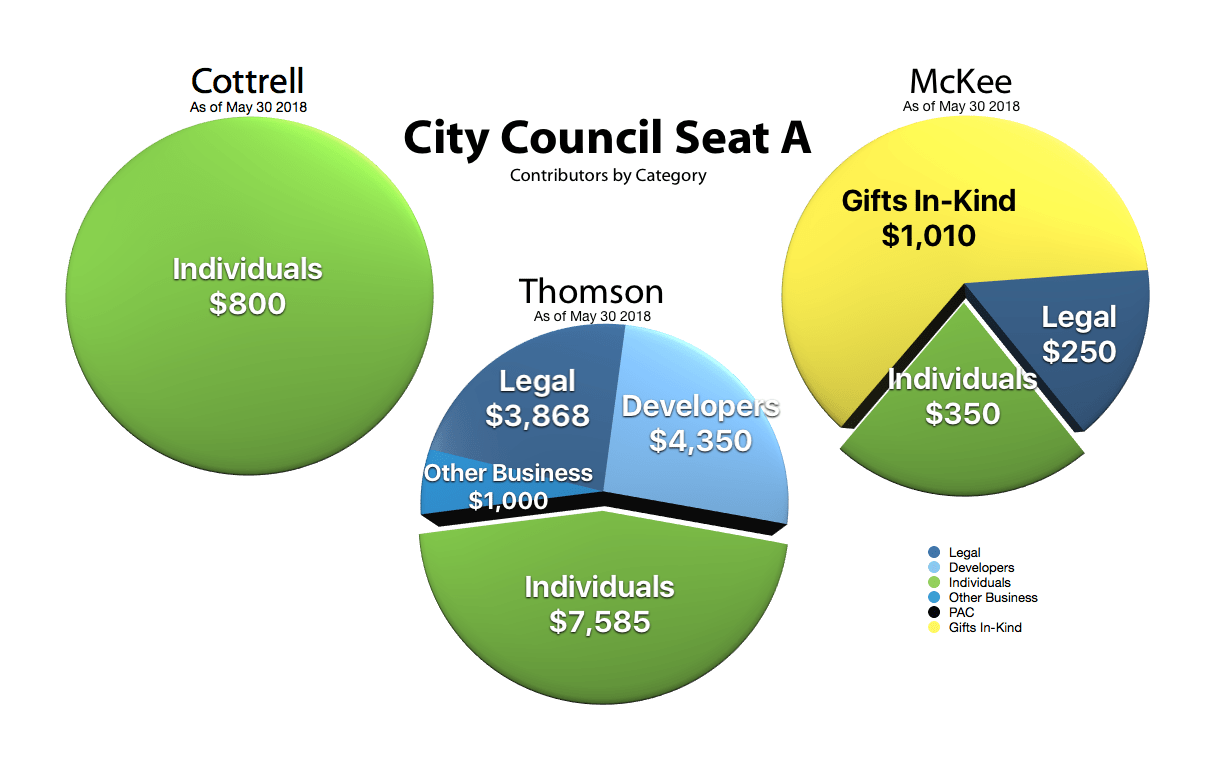 So, you don’t follow the goings on at City Hall but you vote. And here we are with yet another Boca City Council election on August 28 2018. You might think it’s too early to report on campaign financing, but it’s not. Do you think Campaign Financing provides a valuable view of candidates and predicts where loyalties will fall when votes are cast in city hall? How do you reconcile what’s claimed in the old school and expensive glossy mailers versus what elected officials actually do? BocaWatch has been watching and offers the analysis below.

Check it out before the slick media campaigns hit and the political action committee campaign flyers fly.

You need go no further than this past May to see how campaign financing predicted loyalties. That’s when the Tower 155 developer asked to use a parking lot on the other side of Mizner Blvd (the residential side) for construction materials and employee parking. Here’s how it went:

In spite of city staff recommending “AGAINST” and local residents asking to “DENY”, the vote on allowing Tower 155 to use the parking lot across the street followed campaign financing lines. Perfectly. Developer backed Singer and Rodgers predictably voted to approve. Resident backed candidates O’Rourke and Mayotte voted against.

It should come as no surprise: Developers and attorneys were the majority financial backers of both Singer and Rodgers when they ran for City Council in March of 2017 and 2018 respectively. Here’s the campaign financing for interim Mayor Singer and councilman Rodgers.

One thing’s for sure: Scott Singer (candidate for Mayor) and Andy Thomson (candidate for council seat A) are the darlings of the development and legal communities. And nowhere is this seen more clearly than in the campaign financing reports. Read on.

Which one of these Council Seat A candidates is not like the other?

Candidates for seat A have filed their campaign financing reports. Boca Raton native, Kathy Cottrell raised $800. Tamara McKee raised $350 from donors and $1,010 worth of “Gifts In Kind”*. In contrast, Mr. Thomson jumped out of the starting gate with cash contributions of $16,803. Half of that are donors which come from … wait for it … the legal and development communities. This is not a coincidence. Thomson’s “Developers vs Individuals” donor ratio falls in line with legal and developer backed candidates Grossman and Rodgers from the last election.

Mr. Singer’s developer and legal related funding sources are 23% and 25%, respectively. Mr. Singer has been fund-raising since last October and has accumulated $84,430.

Not all Boca votes can be bought.

Fortunately, for Mr. Singer’s main opponent, Al Zucaro and his supporters, it is not always campaign financing money that wins elections. This was clear in Monica Mayotte’s crushing victory over Armand Grossman in the March 2018 election for seat D. Mr. Grossman outspent her over three to one but lost.

I expect Mr. Zucaro can count on a voter base of residents that regret voting for former Mayor Susan Haynie in 2017 as well as a strong base of voters who feel a change at the top is overdue. The Zucaro campaign began in late May with a personal loan of $3,500. Mr Singer loaned himself $15. Here’s a historical perspective:

While Mayor Haynie awaits her day in court on corruption charges, we’re left with a four person council. The Tower 155 vote on the use of a parking lot for construction purposes deadlocked right along resident backed vs developer backed loyalties. Campaign financing points to Thomson as the developer backed candidate for Seat A. That guarantees continuing their agenda with a 3 vote lock. Learn more about the Tower 155 parking lot vote: Tower 155’s Got A Lot To Improve

Based on the funding for both Singer and Thomson, it is most probable their campaigns will both be beneficiaries of the Dark PAC money (read: “hard to trace money”). BocaWatch has noticed that the active reporting of campaign finance done by our blog has encouraged campaign money from the developer and legal community to seek less visible ways to support candidates. You can learn more about “dark money” in recent Boca elections here:  PAC money came from where?

I think Boca is better served if the City Council represents its geographic regions, not its economic ones.

Astute voters of Boca Raton are seeking the candidates that will best represent the long term viability of Boca Raton as a unique and desirable place to live. This means swinging the balance in favor of Boca’s quality of life for people who live here. It is time to rethink how we continue the inevitable buildout of Boca Raton. We have reached the point where it is now time to stop building for maximum profit and instead build for people, with quality of life issues in the forefront. A “Resident Friendly” majority council is the only way to do that. I think the campaign financing reports are a useful compass and campaign mailer “snooker proof” tool for voters who feel the same way. YMMV.

* “Gifts In Kind” – These are services or materials performed or paid for by the donor but not charged to the candidates campaign.