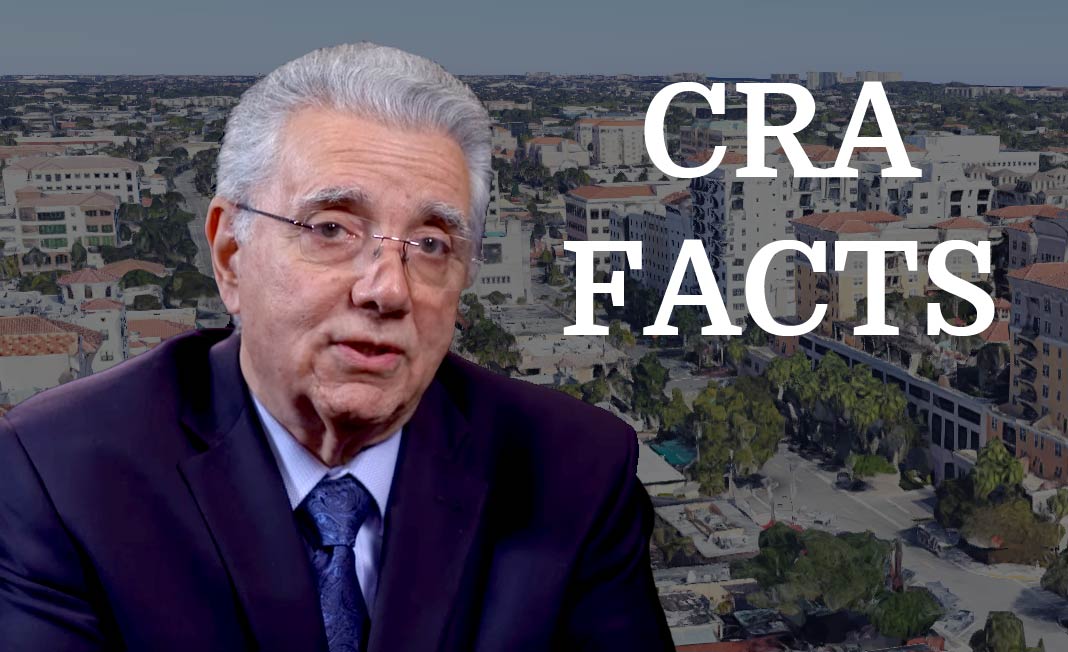 A Community Development Agency (CRA), generally speaking, is a dependent special district that is established pursuant to State law by a local government.  By design, the CRA fosters public and private investments to encourage economic growth and improve the quality of life in the redevelopment area.

Established in 1980, the Boca Raton Community Redevelopment Agency consisting of some 344 acres in the downtown was formed for the purpose of stopping the deterioration of the downtown area and to give people a reason to come to the downtown.

According to the mission statement on the City’s website, “…the mission of the CRA is to advocate, administer the policies, and assist the public, downtown property owners and businesses in order to achieve the CRA Vision of the Downtown.”

Well, perhaps this was the original intent but in my ten years of observing Boca Raton’s City/CRA activities, it seems that the mission statement may have lost its way….the vision has become blurred.

Florida Statutes controlling a CRA designated area are FS 163.330 – 163.463 Part III Community Development.  Contained within these statutory sections are the general provisions identifying types of activities that the revenues produced from the CRA may be used for.

Some of the appropriate activities that may be funded by CRA revenues are listed below.

Of particular note is the concept of Tax Increment Financing (TIF).  TIF is a method to pay for redevelopment of a slum or blighted area through the increased ad valorum tax revenue resulting from that redevelopment.

Specially, Florida Statues provide that a CRA has the power to enter into contracts with private developers, issue revenue bonds, create a community redevelopment plan, deed publicly owned lands to a designated project, approve the acquisition, removal, and disposal of property while utilizing the future gains in taxes to finance current public improvement.

Does anyone remember any of these activities happening in the last decade?

As a rather active Boca Raton Government/CRA observer, I am challenged to remember when, over the last decade, topics like these have seen significant public debate not to mention projects that have been approved to receive funding from the TIF revenues.

BocaWatch is calling upon the current CRA Commissioners to order the Executive Director to produce a report reflecting how the CRA revenues are allocated, budgeted and expended;  what projects are actively being financed with the TIF revenues; and what projects have received TIF funding over the last decade.

With the pending sale of Mizner Park approaching, this public conversation is essential for the taxpayers and land owners to better understand CRA operations for the downtown; the projected expenditures to support the onslaught of new residential and commercial properties; and the advanced thinking for how to address current and future congestion, parking, and traffic concerns.