You thought that Boca’s building binge was over?  That developers could not possibly try to cram any more mega-buildings into our square mile downtown area?  That congestion and traffic couldn’t get any worse?  Think again.

Next month, the Community Appearance Board and the Planning and Zoning Board will consider an application from developer Elad to build a mammoth condominium project on SE Mizner Boulevard.  It is called Mizner 200.  It is even bigger than the controversial Archstone project (Palmetto Promenade) currently tying up traffic on East Palmetto Park Road.

Both the CAB and the P&Z Boards should send this project back to the drawing boards.  It would not be the first time.  Several years ago, Elad sent shock waves through Boca’s residential community by proposing several 30-story glass and steel towers for the site.  These were swiftly rejected.  Then they came back with a proposal for multiple high rise buildings that exceeded the site’s 100-foot height limit.  Also rejected.  Mizner 200 is their latest attempt to cram the most ocean-view units on the 7+ acre site.  This proposal should also be rejected. 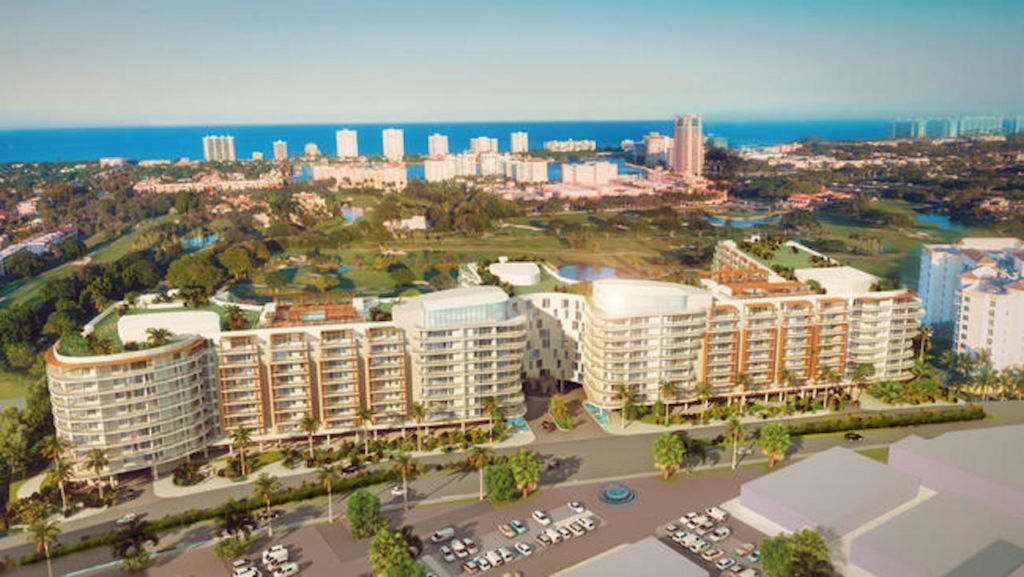 As proposed, Mizner 200 does not conform either to the style or scale of the other structures in its SE Mizner Boulevard neighborhood.  And, in contravention to Boca’s Urban Design Guidelines, it would unnecessarily block the views and vistas of its neighbors.

First is the issue of style.  Mizner 200 is predominantly a glass and steel construction, totally out of keeping with the “Mizneresque” principles outlined in Ordinance 4035.  It looks more like a building that belongs on the Arvida Avenue of Commerce rather than in downtown Boca Raton.  The CAB’s own consultant, Calvin, Giordano and Associates, concludes in their final assessment to the City that Mizner 200 is “not consistent” with a “harmonious architectural environment.”  Nor does it “employ creative reinterpretations of the Mizner tradition.”  Nor does it “contribute to the creation of a pedestrian oriented downtown.”  Finally, the consultants find that the proposed building does not comply with Ordinance 4035’s limitation that “no more than 40% of a buildings surface shall be of glass.”  But you don’t need a consultant’s report to tell you that Mizner 200 does not fit in its neighborhood.  All you have to do is look at an artist’s rendering of the building—if you can find one that shows you the building in its entirety, and not just a portion of it.  It’s an anomaly.

Which leads to the issue of size.  There is a reason that the developer is shy about showing full frontal pictures of Mizner 200.  It is by far the biggest building ever proposed for downtown Boca (if one forgets the 30-story towers that Elad originally proposed for the site).  Mizner 200 is ten stories tall and three blocks long.  At 960 feet, it is longer than the Eiffel Tower is tall; almost as long as the Empire State Building is tall.  The architects have created some tiny sight lines in the latest version, but Mizner 200 is still ONE BUILDING.  It is larger in volume than the mammoth Palmetto Promenade structure that now occupies much of the north side of East Palmetto Park Road.  It is a monstrosity designed to maximize profits to the developer, while disregarding the greater interests of the City and its residents.

If the Mizner 200 project is approved by the CAB, the Planning and Zoning Board and the City Council, it may well be the last nail in the coffin of the village we used to call Boca Raton.  If you agree, please let the members of the CAB and P&Z, who will be considering this project on October 6th, know your views.  Their e-mail addresses are below:

PLANNING AND ZONING BOARD