This March provides the most important election opportunity in recent history.

For many years now, the Boca Raton City Council has favored the voices of the development community over the voices of concerned residents. This has resulted in changes to our city code for the financial benefit of commercial property landowners and developers.  This has also brought to our city a negative impact on quality of life issues.

This election provides the opportunity to bring a resident friendly majority to our City Council. It will allow voters to make a choice and choose an eminently qualified, yet relatively unknown candidate, Kim Do; a candidate more qualified in work experience and education than her incumbent opponent.

Elections are not a popularity contest, they are the key for finding and getting behind the best candidate.  Here is an opportunity for us, the voters, to make a difference – your vote will count.

So is NEW a bad thing?  In this instance, we think not….

Current City Council Member and candidate for Council Seat C, Jeremy Rodgers has exhibited a developer friendly voting record during his three years in office and demonstrably resident unfriendly.  It is his voting record that has much to do with our current endorsement.

Consider this:  Mr. Rodgers has voted in favor of virtually all development projects that have come before him.  Most notably was the University Village vote to increase the density on an eighty acre parcel by sixty percent.  His yes vote came in spite of considerable, legitimate pushback by area residents; Mr. Rodgers professed his desire to ‘keep golf in Boca’, yet voted ‘no’ consistently on the mechanisms that would keep golf in Boca; As an ode to his backing by the Chamber of Commerce, Mr. Rodgers favored the commercial development of our waterfront parks, in spite of overwhelming residential support to the contrary.

Mr. Rodgers has not shown leadership during his first three years in office.  He has failed to bring forward any meaningful initiatives and proven himself to be a follower.

So, let’s bring a fresh face to the voting booth:  Kim Do

A fresh addition to Boca Raton in the past year, KimDo is representative of the American dream.  She left Viet Nam for the United States as a teenager and has accomplished much since her arrival.  She is an untainted voice, an honest face, with two children attending our public school system that brings a practical and helpful education perspective to move Boca forward.

She graduated from the University of Washington Law School.

Kim is a graduate of George Town University where she earned her Masters Of Law.

She worked for the Securities and Exchange Commission in Washington D.C. specializing in Bond trading.  A very helpful resource to our Council with the amount of debt financing the city is undertaking.

Kim has worked for an international consortium as a principal, building a 2 BILLION dollar company for investors.

At 47, Kim has 20 years of experience applying her education and she will provide solid experience to Boca Raton’s City Council if elected with your vote.  Very important as the City seeks financing to support expansion activities.

Kim has two children enrolled at Boca Raton Community Middle School.  Education is at the top of her mind now and in the future.   She attends County School Board meetings to learn what she and we can expect from Public Education.

We, the community, need smart, “full time” attention to issues here in Boca Raton.  Kim Do is the person who will lead us intelligently with her educational tools and business experience to represent and help us grow as she works to unify Residents – Business and Government alike to create  COMMUNITY.  It takes all three to make it work.

Vote for Kim Do for City Council Seat C.

Remember your vote is your voice; let your voice be heard on March 13th.

Vote for Kim Do;  Kim will ‘do’ good for Boca Raton 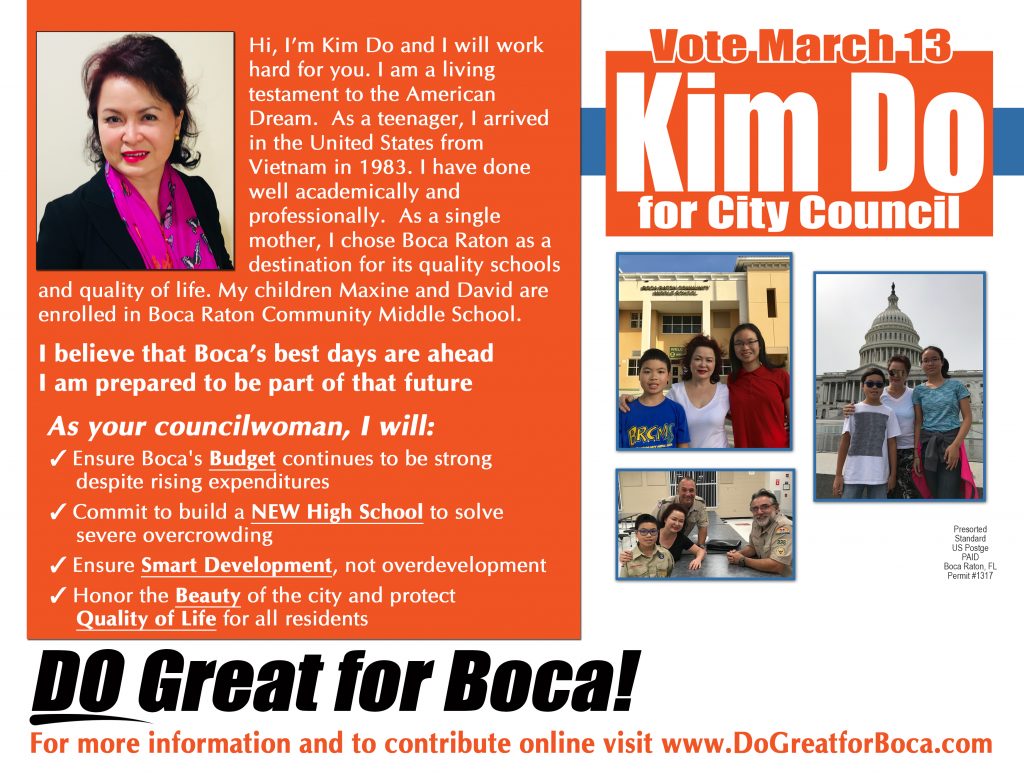 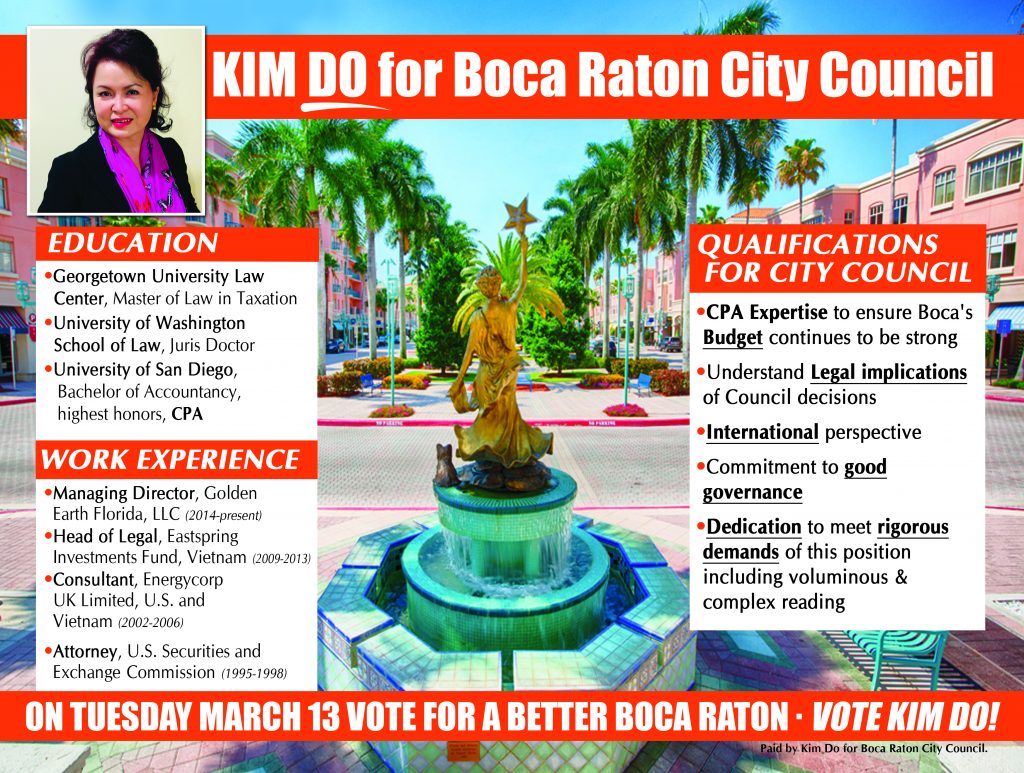