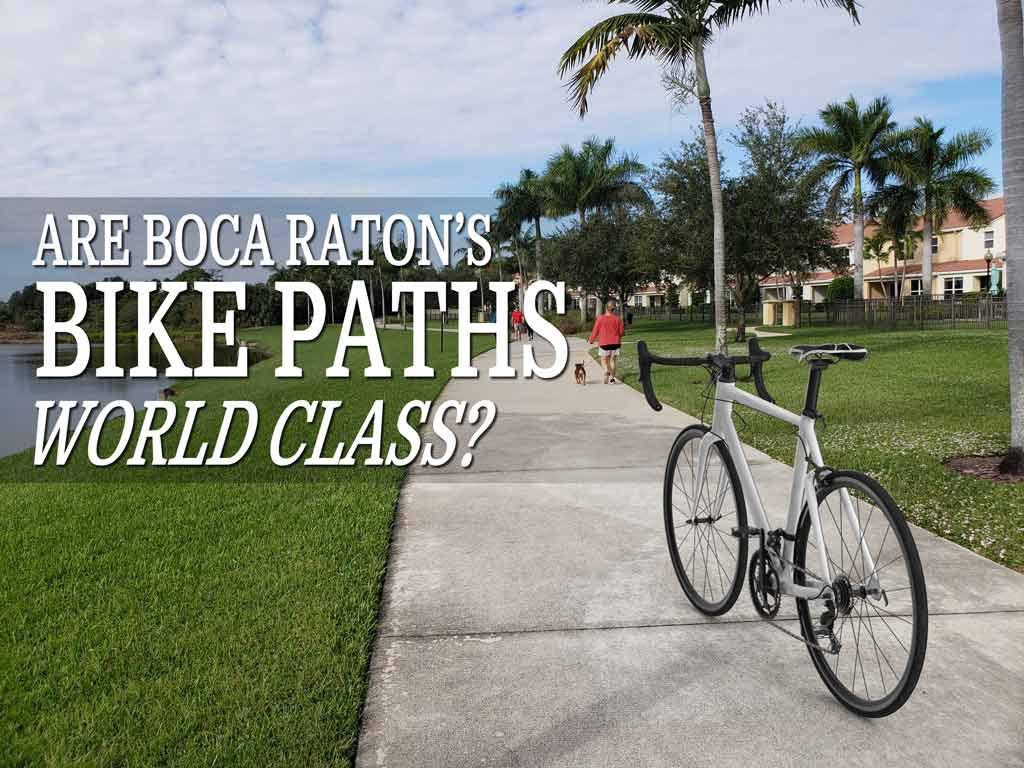 How does the usefulness and safety of bicycling here in Boca compare to bicycling conditions in world class cities?

In some ways, Boca Raton has gained some substantial improvements to biking conditions in the last decade. However, there are many places where it’s not easy or safe to bike still. The biking conditions in mid-Boca still need improvement but they’re a lot better than the conditions Downtown. Downtown is still an unsafe place to bike and recent development hasn’t made it any better. Urban density minus good conditions for bicycling equals horrible traffic because there’s no option to get anywhere other than in a car.

We’re going to see worse and worse traffic, longer times to cross town, more minutes to get to the beach unless we plan for bikes better. We’ll need better options for people to get from A to B that don’t involve clogging our streets. It’s helpful to examine how bikes are used in world class cities so that we can plan around those kind of uses as our density increases.

My last article about traffic in world class cities dealt with everything up to bicycles. Bicycles are a lot more important in these cities than they are in Boca Raton. Amsterdam is known for its bicycling culture. In Amsterdam there’s more room on the streets dedicated to bike traffic than there is for cars. Some streets are entirely free of cars most of the time yet feature two streams of bike traffic on either side.

In Amsterdam, the orderly lanes bikers flow briskly, all going at the same general speed that locals seem to be attuned to keeping pace with. And if you don’t notice them, trying to cross a street might get you run over. They will ram you and not feel guilty when you step into the bike lane because you are the transgressor. If we did that here in Boca, expected pedestrians to look for us as much as we look for cars, we’d be colliding a lot with pedestrians. The general rule “pedestrians go first” seems to be universal for cars vs. pedestrians but in Europe the practical rule is “bikes then pedestrians then cars”. However, there’s a weird kind of rock-paper-scissors relationship where bikes have to follow traffic rules too and end up yielding for cars.

Here’s a short video, narrated by someone with a tragic Hudson Valley accent, that examines the modes of transportation in Amsterdam, the #2 city ranked for bike use behind Copenhagen:

Bikes were always popular from their invention in Amsterdam. There, bikes are literally a “must-have.” Many people don’t use cars, so they either bike, take public transportation or walk. There are even “bike trucks” that have large boxes in their fronts, as wide as cars. Many people have baskets on the back or something that looks like a covered baby stroller attached to the fronts of their bikes for carrying goods. The styles of their bikes are all what we would call “cruisers” and none of them have the top connector bars that distinguish men’s from women’s bikes in the US; all of their bikes are nerdy looking “girls bikes”. There are very few ten-speeds or mountain bikes like we use in the US. There’s a parking garage next to the Central Train Station that’s filled with chained up bicycles.

London has more cars than Amsterdam on the road at any given time. The traffic in London can be so congested that it can take hours to cross the city. This has made public transportation and bicycling more viable options for Londoners than we consider these modes of transportation to be in Boca Raton. The sad part about London’s streets are that they’re only slightly better than Boca’s Downtown in terms of providing for bicycles. As the population grows in London, the rate of accidents grows faster. Anxious Brits on bikes going to and from work are a bit more aggressive than your typical Boca resident cruising down to the beach or along A1A.

While Amsterdam’s biking utopia might be ideal, we’re far from it. London and Paris offer more immediate lessons that are relevant to Boca Raton’s future. London in particular has done a lot of “oversteering” when it comes to trying to improve crowded streets. London teaches us a lesson about guardrails along roads. In order to keep pedestrians out of streets and focused towards crosswalks the City of London had erected metal guardrails along certain busy streets, between the sidewalk and the car traffic. A number of bicyclists have been crushed up against these guardrails and killed whereas if the guardrails were absent the cyclist would have simply been pushed off the road. Making things a little more safe for pedestrians might actually make things less safe for people on bikes.

Paris is very large and the majority of the streets in the center of town are somewhat narrow in comparison to London or NYC. That, combined with the lack of lanes in the streets adds a unique element of danger to urban biking. There’s a lot of biking but even more walking. Both London and Paris have lots of steps, lots of changes in elevation on sidewalks and walkways. There’s nothing akin to the ADA (Americans with Disabilities Act), so public places aren’t equipped with as many ramps and large elevators. If you’re in a wheelchair, especially alone, there’s many places you can’t access at all. This means there’s a lot of places where it’s hard to navigate a bike. The Old World is still very out of date in many places when it comes to transportation technologies as sophisticated as “the wheel”, overlooking standards of design we take for granted in The New World.

The lesson to learn from Paris is to provide enough space for bikes when they’re not moving on the street. Will elevators hold bikes as well as wheelchairs? Is there a place to store a bike safely? Is there enough room on a pathway for it to be shared-use? Paris can’t rebuild itself for all the cars or all the bikes, but as we fill in our empty spaces we can pay attention to their problems so we don’t repeat them and create less usable places.

The Need to Travel

Residents in London, Amsterdam and Paris don’t need to go far to do their day-to-day shopping. Competitively priced neighborhood grocery stores are within walking distance. Here in Boca that’s not the case. Here we need to use cars to do our shopping. Our small convenience stores don’t try to compete with Publix’s prices – they’re not meant to be where you purchase the majority of what you’ll use. When the grocery store is only a block or two away, and has competitive prices, you don’t need a car to shop. Proximity to food makes bikes with baskets even more practical.

To have that level of convenience here in Boca there would need to be a lot more mixed-use zoning. The “bedroom community culture” will eventually have to acquiesce to allowing small shops adjacent to strictly residential communities. Doing so would greatly reduce the cross town journeys we fear by traffic by greatly reducing the travel necessity. In my quadrant of town, just north of Town Center, we would need to actually lose some homes and replace them with small grocers.

Should approval of new residential units in Boca, as we grow more urban, consider whether there’s competitively priced food choices within walking distance? If we want a world-class quality of life how can the answer be no?

Why We Don’t Bike More: Biking Here in the Heat is Brutal

To be honest it’s far easier to bike in moderate Northern European weather as opposed to biking under the withering blare of Apollo. The sun is fun, but not for everyone, not on bike when work and shopping need to be done. How could we make it more bearable? Simple: shady pathways!

Tree covered pathways aren’t just beautiful, they’re highly practical. Breezeways are covered sidewalks – a staple architectural feature in public schools. Try biking in the summer on a sunny day – it can eat up your energy quick. The same distance on a cloudy day, even if the temperature is the same, takes a lot less out of you. Of course, covered walkways protect bikers and pedestrians from rain. Not sweating and/or by not getting rained on makes your arrival on a bike a lot more presentable.

A concrete structure, like a public school breezeway, isn’t practical over every bike path. Trees that block the sun still let rain through and take a long time to grow. A third alternative, metal frames with awnings over the top are fastest and cheapest to construct but are susceptible to hurricanes. Maybe we could explore low tech, low cost, native materials like palm fronds from cabbage palms? Whatever materials are used safety, security, cost, effectiveness and aesthetics will need to be considered.

Imagine one long tiki-hut structure that links FAU with Publix at 5th Ave. Imagine one long tiki-hut structure that runs along Glades until 4th Ave and then diagonals south east towards the new train station. Imagine being able to cross Boca in the shade and not have to worry about rain. Imagine a city government who makes that a priority and gifts us with the means to a practical and world-class lifestyle. If we want to be world class we have to think world class and act! We’ve got to walk the walk, not just talk the talk, but better yet bike the path.