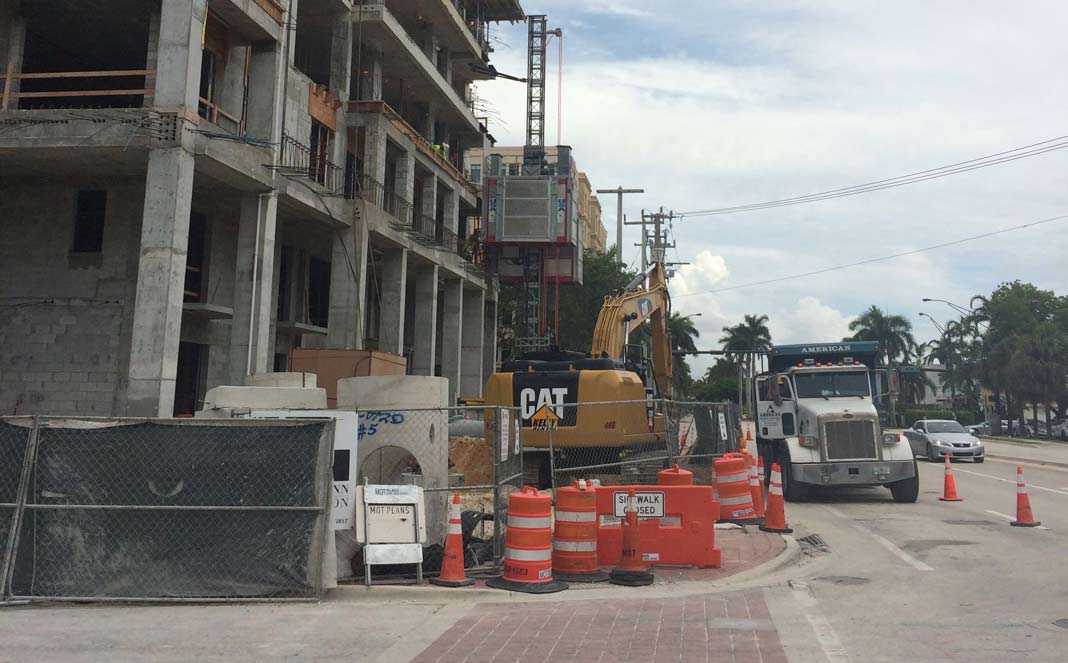 Boca Raton is at a crossroads. As a recent vote in our City Council so dramatically illustrated, our elected officials were split 2-2 between the desires of developers and the wishes of local residents. At issue was whether to grant a zoning variance so that the developer of Tower 155 could use a vacant lot on SE Mizner Boulevard as a “staging area” to facilitate construction. SE Mizner Boulevard is a neighborhood, and neighbors objected vociferously to the creation of another construction site near their residences. Council Members Singer and Rogers sided with the developer; Council Members O’Rourke and Mayotte with the opposition. The proposed variance failed on a tie vote– a victory for the residents on SE Mizner.

Tower 155 is a twelve-story, two-acre building that an earlier Council vote allowed to be built on a 1.2 acre parcel. It may be the Taj Mahal (and priced accordingly), but it’s the Taj Mahal on a postage stamp. Just look at how it rises like a concrete and glass wall right next to the sidewalks on either side. The developer doesn’t even have enough room to maneuver his construction equipment without shutting off lanes of both SE Mizner and East Boca Raton Road. The existing alley between Tower 155 and the Post Office is now wide enough for little more than bowling. Don’t believe me? Take a walk or ride over there and see for yourself. The first thing you will ask is “Who approved this?”

The answer is Councilmen Singer, Weinroth, and Mullaugh on a 3-2 vote. Councilmen Weinroth and Mullaugh are no longer on the City Council—although Weinroth is running for Palm Beach County Commissioner this November. Scott Singer became Mayor of Boca following Mayor Haynie’s removal, and is currently running for election to a full term.

Councilman Singer’s elevation to Mayor created two Council seats to be filled on August 28th. The occupants of those two seats will determine the future direction of our City Council—and of our City. Three candidates are running for Mayor. Scott Singer and BocaWatch founder Al Zucaro are the two frontrunners. Running for Singer’s old seat (Seat A) are Andy Thomson, who has the endorsement of the Chamber and a lot of developers, and local activists Tamara McKee and Kathy Cottrell. BocaBeautiful.org is taking a close look at the positions and voting records of all the candidates and will be deciding about endorsements in the next few weeks. We think that Boca’s City Government needs a change of vision and direction. We are looking for the best people to deliver that change.

The election date was chosen because it is the day that Palm Beach County holds primary elections for the November ballot. It is ironic that such an important vote on Boca’s future will take place at a time when many residents are out of town. You can thank ex-Mayor Haynie’s legal difficulties for that. If you want to have a voice in Boca’s future it is important that you make sure you are registered to vote. You can find out by making a simple phone call to the Palm Beach County Supervisor of Elections office in Delray: 561-276-1226 or in West Palm Beach: 561-656-6200. They will tell you. The deadline for registration for the primary is July 30th.

Once registered, if you are not going to be in Boca on August 28th or for the early voting August 18-25, you can request an absentee ballot from the Supervisor of Elections office. The easiest way is on line at www.pbcelections.org. Just click on “vote by mail” and follow the instructions. If you don’t have a computer but have a car, take a leisurely drive up Congress to 345 S. Congress Ave, Room 103, in south Delray Beach and the friendly staff behind the counter will take good care of you. No fuss, no muss, no waiting. Absentee ballots will be mailed to you after July 24th at the address you provide. Be sure to mail it back well before August 28th so your vote will be counted. You can also call one of the phone numbers above and request a vote by mail application that, once you receive it, you can mail back and get your absentee ballot mailed to your non-Boca address.

On August 28th we will know which way Boca’s future lies. With a resident-friendly majority on our City Council and some fresh faces in City Government that future can be a lot brighter. The stakes on August 28th couldn’t be higher. Wherever you are, be sure to vote.