Another example of our City’s ‘Star Chamber’ methodology…

Perhaps a most important question to be raised at the City Council meeting on Tuesday, August 9th, will be how and when did the City Council decide that Ordinance 5357 and Ordinance 5358, annexation ordinances for 5 geographic areas contiguous to the City’s northwestern border, be brought forward for vote by the residents of those areas on involuntary annexation into the City but without a vote of the current Boca Raton residents to determine the support for such an expansion? 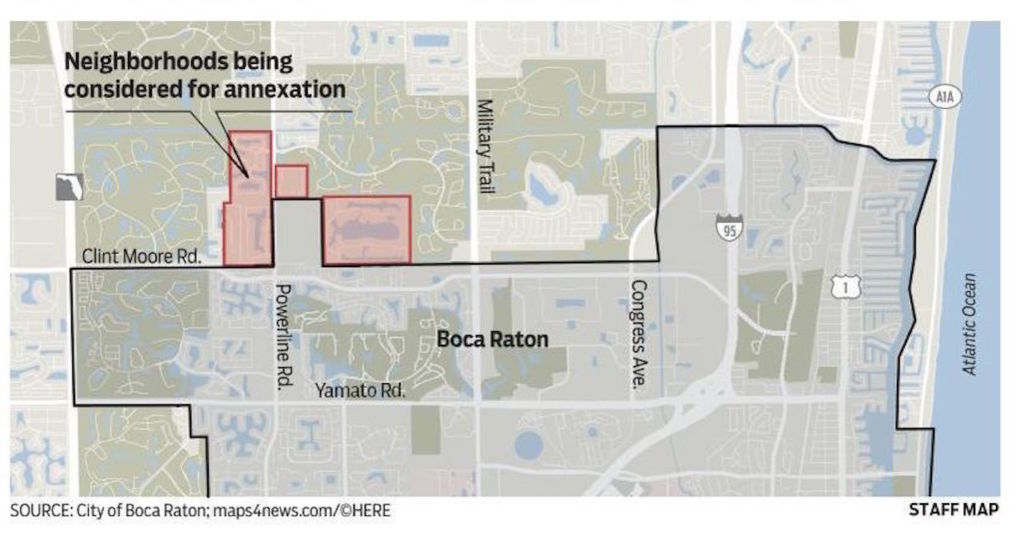 In his cover letter recommending approval, City Manager Leif Ahnell provides background as to how the City has advanced to this late stage in the annexation process without any public debate or directive from the City Council beyond a brief discussion at the City’s goal setting session on May 9th, 2016. Manager Ahnell goes on to state that the City Council gave ‘consensus direction’ for staff to proceed with annexation of these areas; ‘consensus direction’ that has never allowed for an expanded public input or comment.

Since May, the process seems to have been on a fast track with staff now having completed a fiscal analysis on revenue, service and cost impacts of such an annexation. Such analysis will be provided to Palm Beach County 15 days prior to City Council’s consideration of commencement of the annexation procedure but as yet has not been fully discussed by the full City Council for the residents’ benefits.

Florida Statute 171.0413(2) states that the City has to provide a referendum vote opportunity to the residents subject to the involuntary annexation hence Ordinances 5357 and 5358. This same section of Florida Statute states that the City ‘may’ also allow for a vote of current City residents to determine whether residents are in favor of such an expansion through these annexations. This statutory provision, certainly a policy directive, has never been brought forward in a public hearing to determine whether to allow or not an additional vote for expansion by the current residents before moving forward with the involuntary annexation process.

Not simply a rhetorical question.

It is a question that is raised here as well as in other major initiatives taken by the City without ever a full Council discussion of the operational and policy details for the public’s benefit. A major decision like these annexation initiatives should require the pros and cons to be put to the current residents in a referendum vote; a vote that is clearly provided for within state statute. A vote that has apparently been brushed aside without public input and merely pursuant to the ‘consensus’ discussion at the May 9th goal setting session.

Policy questions to be raised by an aggressive expansion to the north and west should be given a full opportunity for the current residents to understand and vote upon. A simple fiscal analysis that may or may not actually take into account the complete financial impacts over time is not enough.

Expansion further and further to the west and north and inside these private communities will change forever the character of our city. The extent of these changes is fair public debate and the residents should be heard on this policy shift before an aggressive expansion is undertaken.

The relevant sections of Florida Statute are found at F.S. 171.0413; 171.042; and 171.043. A simple Google search will provide actual statutory language. In summary, the statutory language contains many items worthy of public consideration and discussion.

Yet again, the public is being excluded from providing its input to the City Council before the Council taking such a major policy decision destined to affect the essence and character of Boca Raton, not to mention the financial and operational impacts that can reasonably be foreseen as predictable and necessary to assimilate these communities into the urban character of our city.

It is time to end the ‘Star chamber’ nature of our City Council. Wherever possible, especially where statute and logistics allow, the resident should be invited to be heard. This principle cannot be better demonstrated than in the policy directives of Ordinances 5357 and 5358…..

In summary, let the current residents have their vote on this Annexation question(s).

Provide for this question(s) to be placed in front of the City’s current resident(s) on the November 8th ballot along with the question of involuntary annexation to the residents within the 5 communities sought to be annexed.

It ‘costs’ nothing more to provide an informative opportunity to current residents but ‘buys’ an enormous amount of good will for the City Council by demonstrating its willingness to include and consider the residents’ voice.