First and foremost, I would like to thank everyone who voted Yes for Amendment 4 on the August primary ballot.  That was the first step to ensure a thriving solar industry in Florida.

The final phase of the solar amendment confusion ends on Election Day, November 8th with the defeat of Amendment 1.  Below is the text of Amendment 1 and a detailed description of what each phrase of the amendment actually means to Florida consumers.

Here’s what you’ll see on the ballot:

This amendment establishes a right under Florida’s constitution for consumers to own or lease solar equipment installed on their property to generate electricity for their own use.(1) State and local governments shall retain their abilities to protect consumer rights and public health, safety and welfare(2), and to ensure that consumers who do not choose to install solar are not required to subsidize the costs of backup power and electric grid access to those who do.(3)

The monopoly utility companies and their special interests have bankrolled over $21 million so far to push this amendment on to the Florida voters. The telltale sign that this amendment has dishonest intent is that not a single solar company or the solar industry in Florida has endorsed it.

Electricity usage is flat in Florida.  Utility companies in the state must keep building to their current infrastructure, i.e. more power plants, either natural gas, nuclear, or coal-fired, to increase shareholder value. They want consumers to use as much energy as possible and purchase it only from them.  This is how they justify building more power plants and maintain their market share. Power companies do not want consumers to conserve energy or to generate their own using solar because this ultimately means less profit for their shareholders.

With the state of our fragile environment, this is completely counterintuitive.  We, as a state and a country, need to be investing in more renewable, clean energy solutions to protect our environment for future generations. This investment in the clean energy industry will create millions of jobs all over the country and help boost our economy.

Consumer-owned solar energy production has so many benefits to our state and our environment. Here are a few: 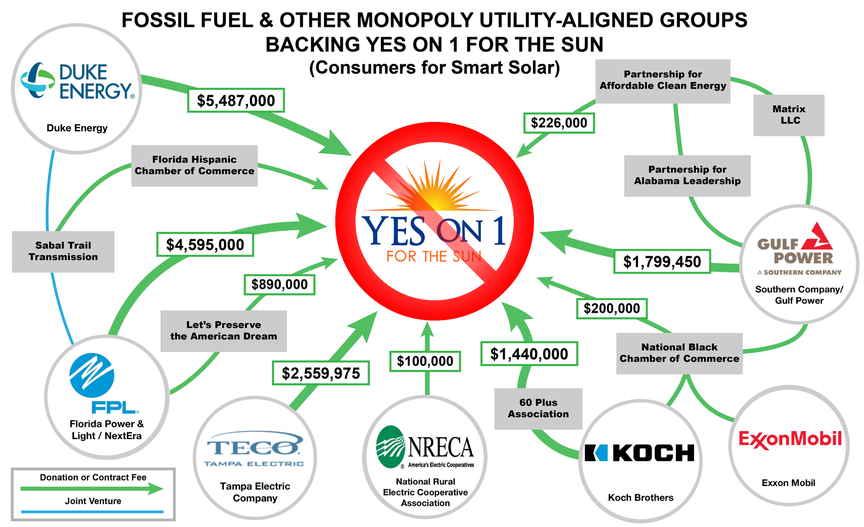 Don’t be fooled by the “wolf in sheep’s clothing” amendment.  Ask yourself, why would the power monopolies be spending so much money to get this amendment passed? Because their profits depend on it, and $21 million to them is just a drop in the bucket.

Remember, whether you are voting by mail, early or on Election Day. Vote NO on Amendment 1!