Imagine being a high school student and it’s Valentine’s Day.

The wind howls as students leave through the entrance, hustling and bustling down the corridors to see their friends. Friends say bye to each other with a hug or a playful punch. Seniors stand tall, confident, and proud, knowing that graduation is right around the corner. A tall teacher wearing a corduroy jacket and thick frame glasses almost resembling Clark Kent usually hands out pink tardy slips but today he receives a pink heart-shaped candy from one of the students.

Soon the bell rings, and everyone except the occasional chatterbox is in rush to get home to study and catch up on homework. When out of nowhere, the sound of a gun thunders throughout the hallway and students huddle in horror. With some students capturing the carnage, panic, the screams, gunshots, and injured or dead bodies on their cellphones while trying to escape.

One of the deadliest school shootings in American history occurred February 14, 2018, at Stoneman Douglas High School in Parkland, Fla. The shooter, and former Stoneman Douglas High School student, 19-year-old Nikolas Cruz pulled out a semiautomatic AR-15 rifle and began shooting at students in classrooms and hallways around dismissal time at 2:40 p.m. Cruz also set off the fire alarm so more kids would exit the classrooms.

As the United States tries to recover from the massacre at Stoneman Douglas High School, some students and other individuals are calling on Congress, the NRA, and state legislators to address gun violence in schools and gun control policies.

“How many people have to die or be seriously injured until people do something? Parkland, Texas Church Shooting, Las Vegas, Orlando, Sandy Hook, and I’m only naming a few”, says guest speaker for Keiser University Chaynea Fox-Sampson.

Mass shootings such as what happened at Parkland High School have changed the way some people view guns and those views have caused a national debate among Americans.

Survivors of the Parkland school shooting have started a movement and a march. The students marched to the state capital to challenge lawmakers to take more action on the country’s gun control laws. It is the first youth organized protest when it comes to gun laws that has started a movement and swept through the nation. Thousands of Florida students walked out of their classrooms in protest to express their thoughts on gun violence and the safety of our schools. An example of this would be the wave of students at the epicenter February 21, 2018, addressing Boca Raton City Hall about banning assault rifles. Students rallied against gun violence, and held signs that read, “It could have been us”, “Feb. 14, no longer a romantic day” and “#WeStandW/Douglas”. 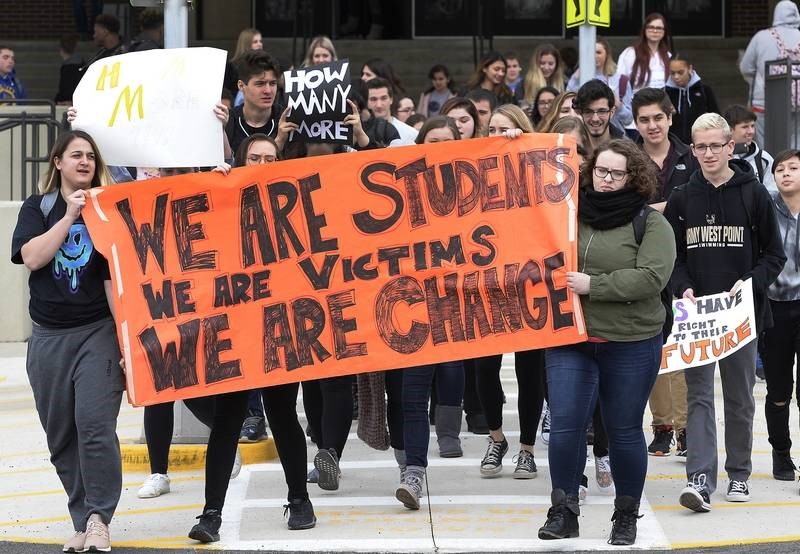 “These kids know what they want for themselves and everyone out there”, says 23-year-old film major at Florida Atlantic University, Jordan Dennis. Dennis continued by saying “These students are helping to create a safe environment and better emergency procedures.”

Since Parkland, Florida’s legislature has taken up at least two bills during its current session intended to provide broader access to guns. State Senator Bill Galvan, called for a bill to raise the legal age limit for purchasing assault rifles from 18 to 21, the same as it is for handguns. The legislature’s current session ends on March 9, leaving very little time for a vote.

Gun ownership is protected by the U.S. Second Amendment of the Constitution and remains one of the nation’s more divisive issues. However, in Florida, an AR-15 is easier to buy than any handgun and the weapon used for the Parkland massacre was legally bought at Sunrise Tactical Supply in Florida.

Schools and college campuses dealing with gun violence have become common in the United States during the past few years, and according to debate.org, some schools are now “staging drills to train students and staff about mass shootings.”

Three of 10 deadliest mass shooting in modern U.S. history have come in the last five months, and “It’s a time to react quickly.” says Lana Ilazarova. Ilazarova, a student at Florida Atlantic University described the massacre as awful. She continued by stating that, “If gun violence happens to one family it happens to all of us. Did they even give the guy [Cruz] a background check?” Lana also believes that if you are someone who lives with children, you should be limited to how many guns you can legally buy.

Like many schools and universities, Florida Atlantic University (FAU) is flooded with students who are all expecting some form of safety on campus. A shuttle bus can be found dropping off students, a student feeds a fluffy-tailed squirrel, two girls can be found massaging their temples while sitting on a bench under a tree sharing and writing notes on flashcards.