Mr. Ehrnst….you should be ashamed of yourself…..

On August 24th,  Craig Ehrnst, a candidate for the Greater Boca Raton Beach and Park district sent out an email with the subject line heralding “The endorsements keep coming in!” (see below).

Contained within the email is an announcement stating that the ‘Voters Coalition of Palm Beach County PAC’ proudly endorses Mr. Ehrnst for Seat 1 on the Beach and Park District and, in its scripted message, thanks Mr. Ehrnst for his ‘service to the community.’  This endorsement appears over the names Leonard Feuer, Chair, and Mary Brandenburg, Treasurer.

On its face, this seems like a meritorious endorsement…but a deeper look reveals it’s ‘bogus’ nature; a sham, a political sleight of hand to deceive the voters.

As reported on August 15, 2013 in the Palm Beach Post by political writer George Bennett, the nonpartisan Palm Beach County Voters Coalition was disbanded.   This reputable organization operated for over three decades as a forum for Republican and Democratic candidates to debate the issues, to meet the public and to better inform the public on the merits of the individuals seeking elected office.

Clearly a highly sought after endorsement, the Voters Coalition had, as its mission, the reduction of voter apathy by involving people in the political process to learn about the issues and about the ‘players.’  However, in its later years, when faced with the extreme polarization of the political parties and the departure of its long time leaders, the Board of Directors of this member driven organization voted to dissolve and terminate the operation; a real loss to the voting community.

Notice that within the Voter Coalition of old, there were organizational leaders; members; published newsletters; monthly meetings; and, an actual board of directors guiding its operations.  Notice also that this respected organization was filed with Florida Department of State, Division of Corporations as ‘The Voter Coalition, Inc.’ and, at one time, had a political action committee, ‘The Voters’ Coalition PAC, Inc.’   Both of these organizations are now listed as inactive at the Division of Corporations with voluntary dissolutions dated 10/30/2013 and 10/29/2010 respectively.

So what is this Voters Coalition of Palm Beach County PAC?

The ‘Voters Coalition of Palm Beach County PAC’ is a new local political action committee attempting to co-op the old Voters Coalition’s name and reputation.   This PAC was filed within the last few weeks with no organizational structure, no identifiable members, no scheduled meetings and no reported financials.  It does, however, have a presence at the Secretary of State, Division of Elections.  (See http://www.pbcelections.org/PoliticalCommittee.aspx?commid=174 )

So what is to be learned from this?

As earlier stated….Mr. Ehrnst, you should be ashamed of yourself….

You are directly responsible here….you should never have put this bogus endorsement out to the public.

The respected Voter Coalition, Inc. of decades past prided itself for informing the voting public on the issues of an election and the character of the players.  Such an endorsement as here would never have met the Voters Coalition’s rigorous standards.  Voters would have been made aware….

So…you now want to become an elected official, you are asking the voters to give you their trust and their vote….well….much to our disappointment, BocaWatch thinks not…And it leaves us wondering why?

Unless you renounce this endorsement immediately, your nature and character will be clearly on display for all the voting public to see…. 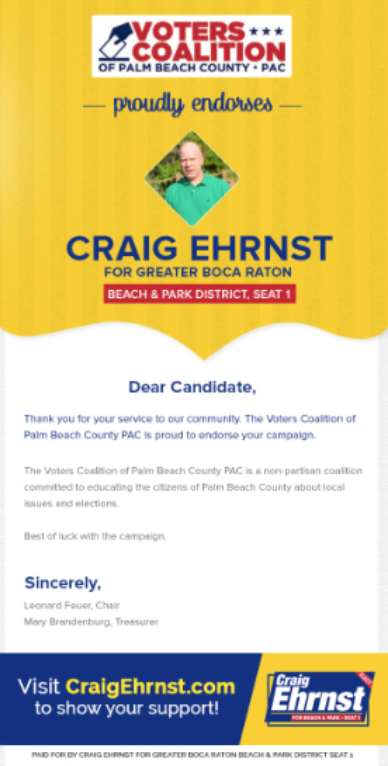