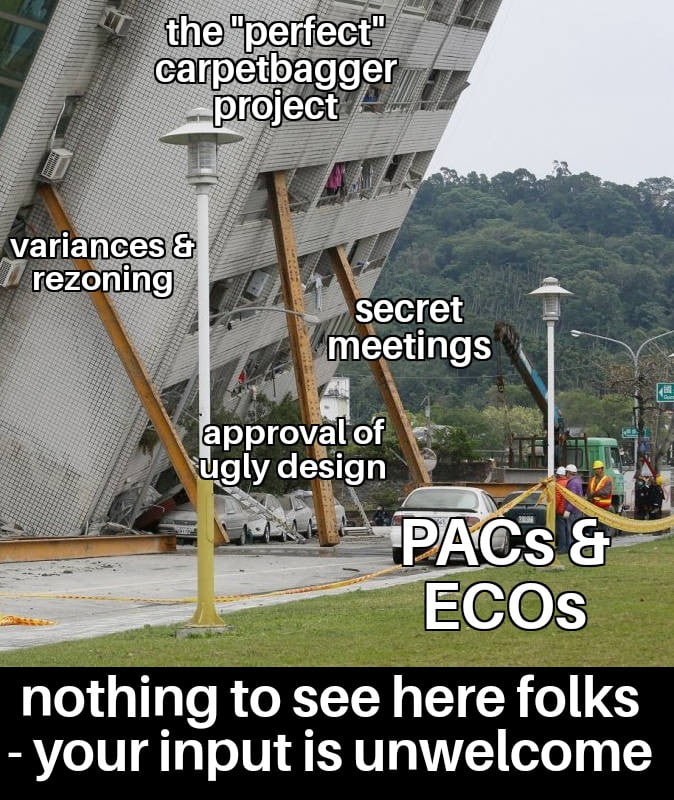 Over the past year BocaWatch has published articles raising issue with the inside baseball people that slither about in the bowels of Boca Raton politics selling their influence and connectivity with administration officials but especially with elected officials.

There are many examples of this influence culminating with projects like Tower 155 which was approved on a parcel of land way too small for the building now coming out of the ground; like The Mark perhaps the most complained about structure to come out of the ground in recent Boca Raton history.

So what do lobbyists and political consultants have to do with projects like these?

Simple…The consultant often works with the lobbyist in tandem…the political consultant works to get the candidate elected; raises money often from clients of the lobbyist; does opposition research; designs negative mailers and television campaigns, funnels untraceable money through Political Action Committees (PACs) or Electioneering Communications Organizations (ECOs) to shield the identities of actual contributors, contributors who more often than not have a financial interest in the candidate and how that candidate will vote in the future on issues related to the donors’ project.

A sleazy world for sure, where the political consultant and the lobbyist, often the same individual, skirt on the outside line of the law if not actually crossing the line with the hope of not getting caught.

Boca Raton has seen these types of relationships in the past. BocaWatch has uncovered them; I have successfully filed ethics and election law complaints and, unintended consequences have happened. First and foremost, Susan Haynie is no longer the Mayor of Boca Raton and ForBoca.Org is now debunked after admitting to violating elections laws in the recent past.

Recently, The Palm Beach Post published an article concerning Rick Asnani, one of Palm Beach County’s political consultants extraordinaire, who has had an elections law complaint filed against him modeled on the complaint I filed against ForBoca.org alleging the same questionable strategies that ForBoca.org employed. Interesting enough is that Mr. Asnani was the political consultant for Susan Haynie in the March 2017 campaign and is, currently, the political consultant for Andy Thomson in the Boca Raton special election for Seat A, the seat vacated by Acting Mayor Scott Singer in his effort to actually be elected and earn the Boca Raton Mayor’s seat.

Last week, BocaWatch reported on the often heard rumor that Scott Singers’ political consultant, Todd Richardson has acted as an undisclosed lobbyist for GL Homes during the recent negotiation for the purchase and sale of the Boca Raton Municipal Golf Course. It was also rumored that Attorney Neil Schiller, GL Homes official lobbyist, is an ardent supporter of Scott Singer and has actually hosted a fundraiser for the Singer Mayoral campaign.

At the June 12th City Council meeting, there was an item concerning a time extension for the GL Homes purchase of the golf course; a perfect time for Mr. Singer to address the reported rumors and disclose the relationships publicly and declare them to be or not to be a conflict requiring recusal.

Alas, just like in the Susan Haynie ethics matter, Mr. Singer remained silent and participated in the discussion and the vote. To date, these rumors have not been affirmed or denied by Mr. Singer, Mr. Richardson or Attorney Schiller. Nor has the City Attorney spoken on the subject but that, of course, is no surprise.

In doing some research on the political consultant/lobbyist relationship to the elected official, I uncovered a March 22, 2009 Miami Herald article, ‘The Legislature: Florida Legislature’s Conflict of Influence: Consultants Serve Two Masters; an interesting read.

The article specifically identifies Todd Richardson as a lobbyist of interest and outlines some of the legendary practices that take place in Tallahassee. The question is: do these types of activities take place in local politics as well? You bet they do…

Let me articulate a moment on a current day consultant/attorney lobbyist team; a team whose names will not be disclosed in this article but a team that is trying to gain favor with at least three votes on the City Council. The team members have continually endeared themselves inside recent Boca Raton politics, either on a paid or unpaid basis; in a manner that is designed to curry political access if and when the candidate gets elected. These individuals in this special election have attempted to manipulate the field of candidates; to pressure candidates to get in or get out of the race; to move from one race to the other; all in an effort to position themselves as political and lobbyist influencers and sell their legal and lobbyist services to the highest bidder.

Why are these ‘behind the proverbial curtain’ characters lining up behind Scott Singer? Because they see his as a vote that can be bought.

To paraphrase a current Trump cliché….let’s clean up the back room influences in City Hall.
The people’s business is paramount.

Remember….Your vote is your voice; let your voice be heard on August 28 in Boca Raton’s Special Election.