Over the last few months, Boca Raton residents have watched the overbearing influences of our local elected officials in working with other outside, independent agencies.

Most recently exampled by inappropriate appointments of Deputy Mayor Robert Weinroth and Deputy City Manager George Brown to the Boca Raton Airport Authority, an independent governmental body. Reasons for these appointments vary depending on who is telling the story. Here, this writer is telling the story and it is this writer’s opinion that these appointments were made because the City Council was unhappy that the Airport Authority was not dancing to the City Council’s tune.

These appointments were designed to get the Airport Authority to bend to the will of the City Council by providing the Council a controlling four, if not five, vote majority on the Airport Board in matters of import to the City Council. The Deputy Mayor and Deputy City Manager’s efforts have resulted in the weakening of an open and transparent government at the Airport Authority through their orchestrated changes to the By-Laws in a manner requiring less public records and even less public oversight.

Having completed these changes, both the Deputy Mayor and Deputy City Manager have resigned their seats on the Airport Authority. However, complaints against their original appointments filed with the State of Florida Commission on Ethics in Tallahassee have survived the initial inquiry of ‘legal sufficiency’.  And now, after the Commission’s concluded investigation, the ethics complaints are scheduled for a ‘probable cause’ hearing on Friday, April 15, 2016.

Perhaps too little too late, but if the complaints are sustained and probable cause is found, residents may find some comfort  that the actions of our elected officials condoned by our city attorney should never happen again.

But Here’s the Item of the Day…

The Airport Authority situation, however is not the item of the day.  What is, is the contentious situation between the City Council/City Manager and the Boca Raton Beach and Parks District.  Again, the Beach and Parks District is an independent body, not controlled by the City Council. Recent reports suggest that the City Council/City Manager and the Beach District cannot come together to schedule a joint meeting even when the joint meeting would result in the District bringing $3.1 million dollars to the City as their contribution to the Beach Nourishment Project. . .How amateurish.

In the last few weeks, Mayor Susan Haynie has met privately with the Beach District’s Chair, Robert K. “Bob” Rollins Jr.  Each reported that their meeting was productive and the topics discussed were beach renourishment, acquisition of oceanfront properties, and phase II of de Hoernle Park. Moreover, the Beach District Chair committed to meeting with the City Manager for scheduling purposes.

Apparently Deputy Mayor Weinroth did not think Mayor Haynie’s efforts to be enough. He decided to ratchet up the controversy by taking the public microphone at the Beach District’s meeting last week to press the issue and to overshadow the efforts of the Mayor.

Arguing highbrow issues like ‘residents know we are on the same team’; inefficient spending of taxpayer dollars; and less effectively run parks and facilities, all, on the surface, his righteous goals. However, there may actually be less righteous goals in his efforts.

Audacity and Hypocrisy all Rolled Into One

First and foremost, the Deputy Mayor, when first placed in office, was encouraged by this writer to hold Town Hall meetings as an interactive method to better communicate with the residents.  At that time, the then Councilman stated unequivocally to this writer that he would never do anything to overshadow the Mayor.  Well it would appear that this is no longer the case.

Second, apparently during his public comments at the Beach District meeting, he raised the issue that the District should consider rules that would curtail its Executive Director, an attorney in good standing with the Florida Bar, from taking cases that, in the Deputy Mayor’s opinion are “problematic”; a potentially intimidating act.  The Beach District’s Executive Director is a local attorney representing two (2) residents in a Federal land use law suit that promises to be potentially embarrassing to the Deputy Mayor and other elected officials, past and present.

Third, as elections approach and considering the as yet undefined field, there is no doubt that the Deputy Mayor has aspirations.  He seems to have fallen captive to the often experienced local elected official disease…the proverbial swollen political head in search of a bigger hat to fill.

Local elected officials should be very cautious to avoid that rude awakening the day after they no longer have a vote and all of a sudden their phones stop ringing and their jokes are no longer funny. . .

…And while we’re at it, let us not forget our city’s organizational chart…and who is at the top! 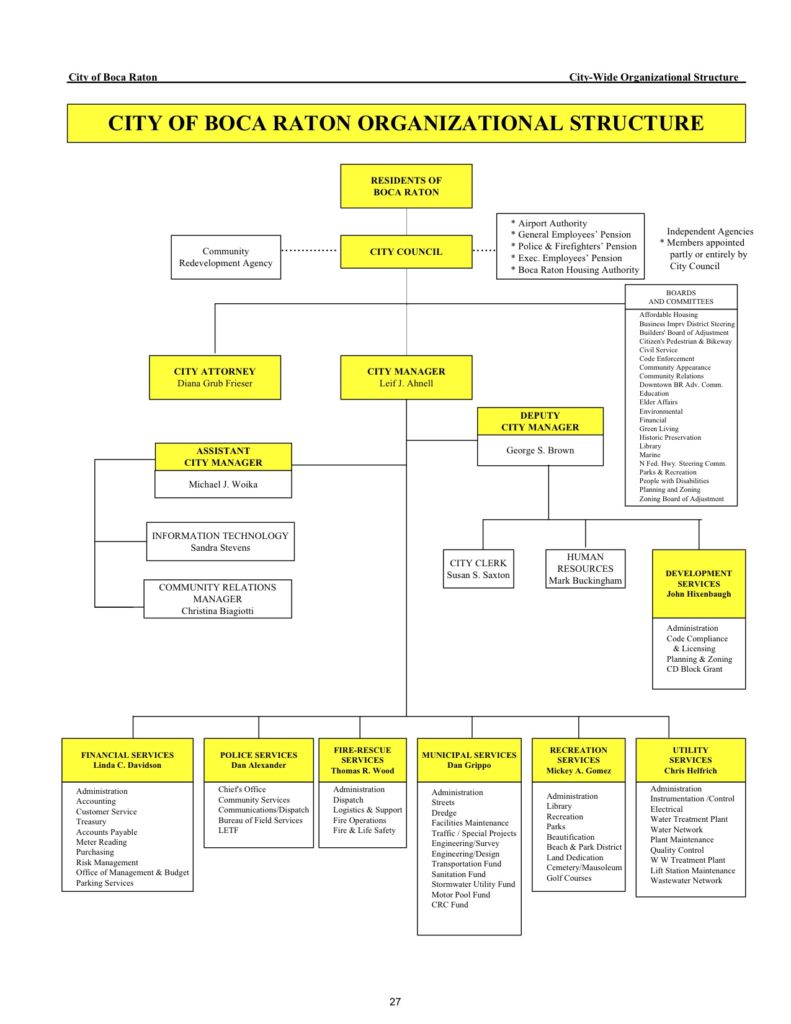