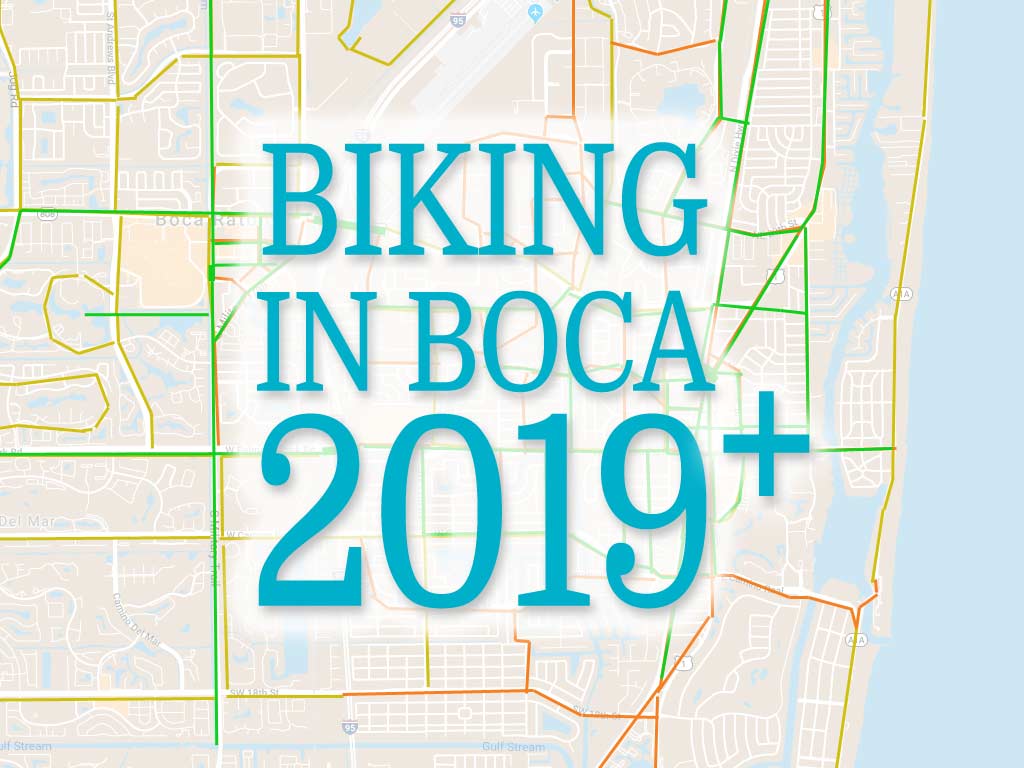 Much love to everyone enjoying this beautiful summer here in Boca Raton. It’s more empty, more hot, more quiet and in my opinion a lot more enjoyable. Now it’s the best time to get on your bike and ride down to the beach. Empty handed with the exception of only a few bucks for a slice of pizza or a soda, or a towel, biking around Boca is a sacrament of freedom many of us got in the habit of enjoying since before we could drive cars. It’s really tops, the stuff of dreams, but the truth is that it could be a lot better. As we get more dense, better biking conditions become more critical.

Where is it good to bike? Where’s it bad?

There are some stretches of road, some quadrants of town where the biking is good. By good I mean completely separated from the road. I don’t consider bike lanes safe and I don’t recommend anyone using them in Boca. Bike lanes are a nice idea, but we’ve got too much of a dominance of fast moving cars on the road. I wouldn’t send my kids out on the road on bikes with advice to use the bike lanes. I know there’s people who bike as a sport, get dressed in spandex and wear aerodynamic helmets. They need the bike lanes. The quality of biking I’m concerned with is safe biking, appropriate for average people. I define it as safe in proportion to the distance bikers would be from fast moving cars. I define it as usable when the “sidewalk” is wide enough to accommodate two-way bike traffic, safe for bikers and pedestrians to co-exist.

I tried to make some maps that illustrate where it’s good and where it’s bad. My maps are about where the sidewalk is continuous and wide enough, distanced from traffic enough, to bike safely.

The first map shows how things are now. There’s some spots where it’s not so safe or easy to bike in my opinion. I’ve marked the existing bike-friendly paths in yellow. The places where it’s not so great to bike I’ve marked in orange. I’m sure other people’s opinions about where it’s safe or not safe will differ from mine, and if that’s the case please explain the difference in the comments below. Show me a photo of a good bike path where I’m wrong, or a poor condition where I said it was safe and I’ll be glad to revise this diagram. The good news is that the City is continually improving bike paths in many places and that these maps will eventually go out of date.

Some of the best biking to be had begins at FAU and continues to the north and west. The new sections of the El Rio trail passing under I-95 and the train tracks are really nice. So is the brand new bike path tunnel that goes under Yamato Road. Using the El Rio trail, crossing Yamato, used to be quite hair-raising. Now the tunnel makes the El Rio trail a joy to bike for all ages.

Communities to the West of I-95 have more space and therefore more area along side the road designated for bike paths. A good example is Potomac Road, connecting Military and Powerline. It has wide sidewalks on both sides of the road and long, uninterrupted stretches that keep bikers and pedestrians far from traffic. To the east, unfortunately, there’s been less space left for bike paths or wide sidewalks as development as proceeded.

The second map shows, in my opinion, what needs improvement. Thinking about where people are going to move to and from, where increased pedestrian and bike traffic would improve the commerce and livability, drives the rationale for placement of bike paths. Boca, like other South Florida cities, has undergone the evolution from undeveloped lots. Our low density commercial properties with no sidewalks and coral gravel parking lots have evolved into urban sprawls sans the enforcement of a consistent sidewalk standard. Some places, some neighborhoods, particularly in the east part of town, have no sidewalks at all.

There’s a couple sections where the green line is thicker. Those are areas that are areas that need the most attention for improving biking. There’s been talk of a train station coming to Downtown if Virgin/Brightline picks Boca as a stop. It makes sense to create a new station in the center of town, and create it so that it has the maximum number of ways in and out of it. There’s no better place in Boca than the place where Federal, Dixie and the train tracks are closest. A train station that spans all three could also act as a way for pedestrians and bikers to cross all three, connecting the library and City complexes with Mizner Park. A large structure could also include parking garages and use the space above the roads as opposed to needing to buy more land to sit on.**

Whether it’s Brighline or smaller investors, if we want Boca to be where they pick to build the future then we’ve got to be on top of our infrastructure game. The last thing we want to see is it going to one of our neighbors instead. Shady bike paths aren’t just for decoration, they’re a requirement for a city that’s leading into the future.

(** Note 7/24 – Since this article was published this “spanning bridge” idea became more than just a dream. This week it was announced as a  soon-to-be reality  – now in motion: Brightline is indeed coming.)