Political jargon is something that seems intentionally muddled. I learned about what separates an endorser from a supporter after reading a recent letter from a reader. It made me ask my Publisher, Al, what it means to endorse someone versus simply supporting them. Like many people I considered an endorsement as something exclusive: I thought you couldn’t give it to two political opponents in the same race for the same office. We talked about it a bit and he does like he usually does: looks up the local ordinance or state statute that’s relevant.

My name is Michael Bell. I am a 13 year resident of Boca Raton. I have been trying to follow the City Council government for the past six years through the commentary in BocaWatch and attending Council meetings.
I made a contribution to Scott Singer’s candidacy and agreed that he could use my name. THIS WAS BEFORE AL ZUCARO DECLARED HIS INTENTIONS. I have since made a contribution to Al’s campaign. I will vote (absentee ballot) for Al and not Scott because Al is the better man for the job of mayor.

Whether you are a recent subscriber or an original you must realize that Al has put his heart and soul into keeping us informed of the inner workings of City Council, or should I say mis-workings!

Who else has kept a tab on every vote and their consequence. Who has made us aware of the allegiance of elected officials and candidates for the coming election. Who, two years ago, while running for mayor, accused Susan Haynie of misdeeds. Who created an atmosphere that developed and gave voice to Andrea Levine O’Rourke and Monica Mayotte so that they would run for City council. Who is doing the same for Kathy Cottrell. Who has given a voice to others through BocaWatch videos of “What’s Boca Saying?” Who put a team together with people such as Jack McWalters, Katie Barr, Jessica Gray and James and Nancy Hendry.
And, who among the candidates is saying it’s not just the Council that has been negligent but the city manager, the city attorney and others.

Who for six years has had our backs………AL ZUCARO.

PS: Absentee ballots are easy to get. Call 561-656-6200. Ask a team member to email or fax you the form. They must be signed by each individual and mailed back to be valid.

After reading this I wondered if its author is now officially an endorser of both Al Zucaro and Scott Singer. Clearly he states that his wish is for Al to win the race, as per his letter, and that his intention is to officially endorse Al by it. But does his writing this letter officially retract his endorsement from Scott? Does he have to write a similar letter to Scott telling him he officially un-endorses him in order for Scott to count his endorsers correctly? 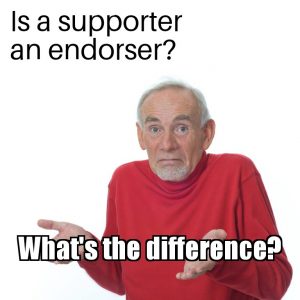 Many political races result in opposing candidates receiving support from the same contributor. A contributor can support two opposing candidates. This happens often in Presidential elections, but usually the degree of support is greater for one of the candidates. For legal purposes, if someone contributes money to a campaign they can be counted as a Supporter. Supporters have to be counted for legal purposes, to make sure campaign finance laws are being followed.

A person can write a letter of endorsement, similar to the one shown above, without necessarily showing support by being a contributor. They can be called a supporter, but not a Supporter in terms of being a Contributor. They can say that they EXCLUSIVELY ENDORSE a candidate. That implies they’re definitely not supporting the opposition. They can state that they retract their endorsement, or make one endorsement exclusive. But without doing something like that, both candidates are free to claim that individual as an endorser.

Let’s take a look at the Florida Statute that functionally defines those terms:

From this statue it appears that anyone who supports a candidate becomes an endorser, automatically by virtue of the support. It would be a simple matter if the term “support” were limited to financial contributions. But guess what? It doesn’t have to be. Let’s think about today’s real world example: The “Endorsement” form on Scott Singer’s website. He asks for a name and email address, so he can count his website visitors as Endorsers. Ok, fair enough. Although anyone from out of town could sign up and submit a fake name, I’d expect his campaign to be doing some kind of vetting, making sure the people who sign up are actual residents. You could sign me up, or sign Al Zucaro’s name to it. I wonder if Scott would count me or Al. Technically Al Zucaro could become a Scott Singer Endorser, out of admiration for his opponent or just to be polite. Or maybe he’s put his name in that list because he’d want to receive Scott’s campaign emails?

If he was sincere about it, and wanted to be nice to Scott, would Scott count him? Would Scott list him as one of his Endorsers? He could, technically according to Florida Law.

I imagine back when the law was first envisioned it was somewhat laborious to get out your ink and quill, sit down at your desk and write an endorsement letter. It meant something substantial to a candidate to receive a physical piece of paper, signed by the constituent, where the constituent invested in paper, packaging and post.

But now, it’s quite different. I feel guilty, somewhat, being one of those “web developer” guys who digitized everything, bringing it all one click away. Now there’s 10,000 digital ways a voter can “support” and therefore “endorse” a candidate. Now an endorsement is instantaneous. Now it can be done with too few clicks.

Are these things endorsements?

Is it cool for a candidate to tell you someone “endorsed” them because of the above? Florida Law says in some of those cases, in certain ways, it is.

What do you think?