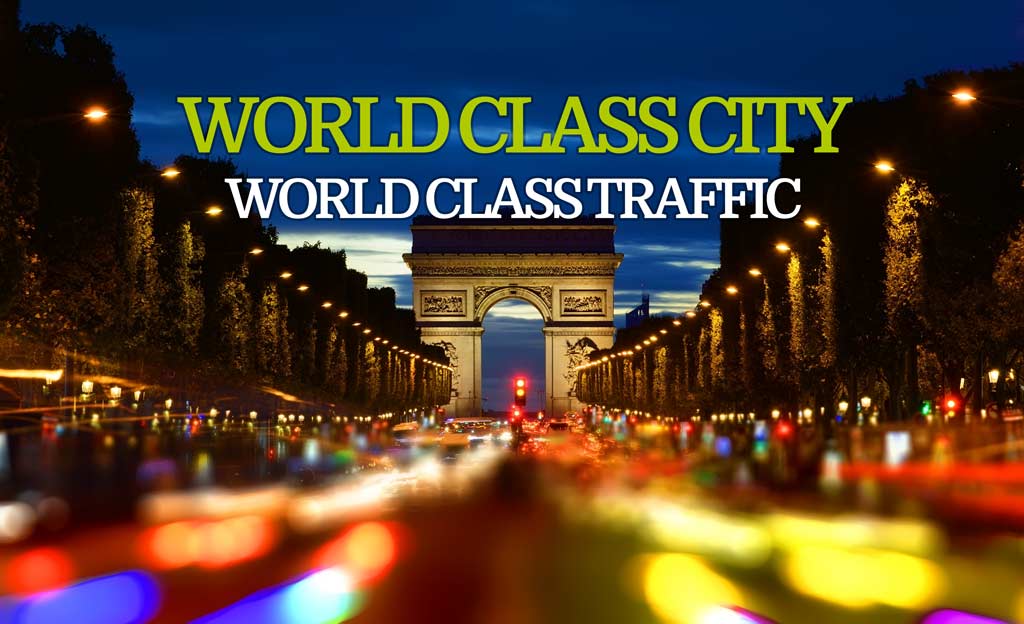 Three truly World Class cities, London, Amsterdam and Paris, deal with traffic in different ways that’s hard not to notice and compare. Compared to how we get around, the three of those cities have a lot more ways to get around and a lot more people moving from place to place. The time that it takes to go about our daily business in Boca Raton is worse than it has ever been in memory, yet it’s far better than real World Class Cities deal with. What’s interesting is the different ways they’ve dealt with their traffic and how those ways might work for us.

Comparing the Size of the Cities to Boca

London has 9 million people while Paris claims around 2.5 million people are in the formal city boundaries. Amsterdam has just less than a million people and is still twice the population of the City of Miami at 0.46 million. Paris packs the entire population of Dade County into a space that’s only 6 miles wide – that’s the distance from the Pavilion on Palmetto to where Palmetto crosses over the Turnpike. We have around 0.13 million people in Boca Raton, so Paris is basically 20 times more crowded than Boca – like fitting our present population plus nineteen more populations of the same size in the same space. That’s a lot of people – that’s a lot of crowding – that’s a lot of traffic. London is second only to Moscow in terms of European’s time spent in traffic: gridlock. Paris is the third most gridlocked European city but none of them are worse than Los Angeles.

The Means of Travel

Here in South Florida things are generally spread out. You need a car in most cases where there’s a need to go to work or to do shopping. There’s some public transportation in Boca but most people find it an impractical means to get where we need to go. In real World Class cities there’s a strong dependence on walking and public transportation – it’s the primary means of travel for most people. Bicycling in European cities is much more popular than in major US cities, so much that many city residents have no need to own a car. For example, London has roughly 9 million people and there’s only 2.6 million registered cars. In Amsterdam there’s roughly 1 car for every 2 people but there’s more bikes than people.

In London, Amsterdam and Paris, each has impressive public transportation systems. Each has a metro system that we call subways. London depends on lots of busses, most of which are double-deckers. In the US double-decker busses are a novelty that gets used for sight-seeing, but in London they’re a practical necessity given how many people need to ride. Amsterdam depends more on cable car trams that move above ground and are electrically powered. In Paris there’s less bus and tram options than the other two cities, but more than here. In Paris, people walk a lot and rely on the Metro.

Metros, underground rail systems, are the fastest means to travel from one place to another. The most impressive Metro system between the three cities was Amsterdam’s which was the cleanest, most frequent, least crowded and fastest. This was in spite of the high water table in Amsterdam – they still manage to do a lot underground and keep it dry. If we wanted to install an underground rail system we could do it using Amsterdam’s techniques and technology.

Paris has a fast and frequent Metro system but unfortunately the stations are kind of gross, worse than NYC. London’s is the most crowded during rush hours, so crowded that there’s literally no room to add another traveler on a car. In London, stations get dangerously crowded as people are forced to watch doors close and wait for the next train.

Finding How to Get Around Using Google

The public transportation systems in each of these cities stay on schedule quite tightly and can be timed using Google Maps which seemed to have very accurate information on when busses and trams are scheduled. By using Google Maps to discover routes and timing it’s possible to move across these cities much more quickly than by car.

But just like here on Tri-Rail, there can be issues with public transportation that can cause big uncontrollable delays in your journey. Being trapped on a train car while precious moments tick by can be quite an anxious and costly experience, especially when your next connection, a train or a plane, won’t wait.

Paris is slightly better than London with regards to street congestion.  Uber exists in all three cities and it’s often cheaper to use Uber than public transportation when you’re going short distances with a group. The fares around Paris are pretty competitive.

It’s hotter in Paris compared to London and Amsterdam. It’s fair to call it the “Atlanta of Europe” in terms of the weather, all landlocked and far from sea breezes. This week it saw temperatures as high as 115 in the city! Whereas a mile or two might be a cool and pleasant walk in London or Amsterdam, in Paris going the same distance is a sweaty, dirty, architecturally monotonous affair. Therefore taking some kind of vehicle in Paris is ideal. Greater Paris is so large that there’s a heavy dependence on the Metro but cars move a little more freely than the latter two. Paris doesn’t have car lanes on it’s streets so it’s a free-for-all in terms of who can get in front of who: vehicular anarchy compared to the USA.

In European cities, like some US cities, there are now these electric scooter board things all over that can be rented immediately and activated via phone app. Many people use these and many can be seen all over, abandoned, left after use in the location where the last user ended their journey. Some people ride two to a scooter, with the person in the rear wrapping their arms around the person in the front with both holding the handlebars.

If we had enough of them spread around Boca this might be a popular mode of transportation here. But the problem would be acquiring one while deep within a gated community, and what good does it do other people if they’re left far from where they need to be found? Maybe it would be practical for us to have them privately owned. Maybe Downtown Boca should consider finding a company who can do this here?

Skateboarding is awesome no matter where you are. It’s one of the most effective ways to get around in a giant city where there’s public transportation. It’s even faster and easier than using a bike because you don’t need to chain up a skateboard. However, skateboarding depends on having surfaces that facilitate it. Skateboarding on cobblestones is impossible. Doing it on sidewalks with a lot of bumps and grooves is unpleasant if not difficult.

Downtown London isn’t therefore a great place to skate. Too many weird curbs and cobblestones make moving on a skateboard too unpleasant. Amsterdam is the same. Neither are worth bringing a skateboard along. Paris, however, is another story. Paris has cobblestone streets but someone in Paris has been designing the sidewalks to be skateboard friendly. They’re smooth and keep very clean in a manner that counts. This makes travelling on a skateboard or scooter very nice in Paris.

How is Boca for skateboarding? It’s hit or miss. We have skate parks that keep the skating contained. There are a few places in Boca that can be called “skate friendly” and as a general rule it’s more often easier to skate in the road compared to using the sidewalk. For example, Potomac has a stretch between Jog Road and Military that has a wide sidewalk separated from the road. However, the sidewalk paths along this stretch are not amenable to skateboarding. There are too many grooves where there’s concrete and it’s too bumpy where there’s asphalt. Riding for a block on that kind of surface can make your feet feel sore.

Marketing and advertising in Boca Raton? Use Massive Impressions for your next marketing project or ad campaign

A good example of a smooth stretch of sidewalk circles the lake inside the Spanish River Atheletic Park, across from the library. Skating there is quite nice. Boca would see more people using skateboards, practically, if we made an effort, like Paris, to think out our sidewalks better and make them super smooth.

But what about bikes?

Keep an eye on BocaWatch… the second half of this article is coming next and it’s all about bicycles. It will reveal how bikes are used in World Class cities, how we can learn from them, and how it might make our biking better here.