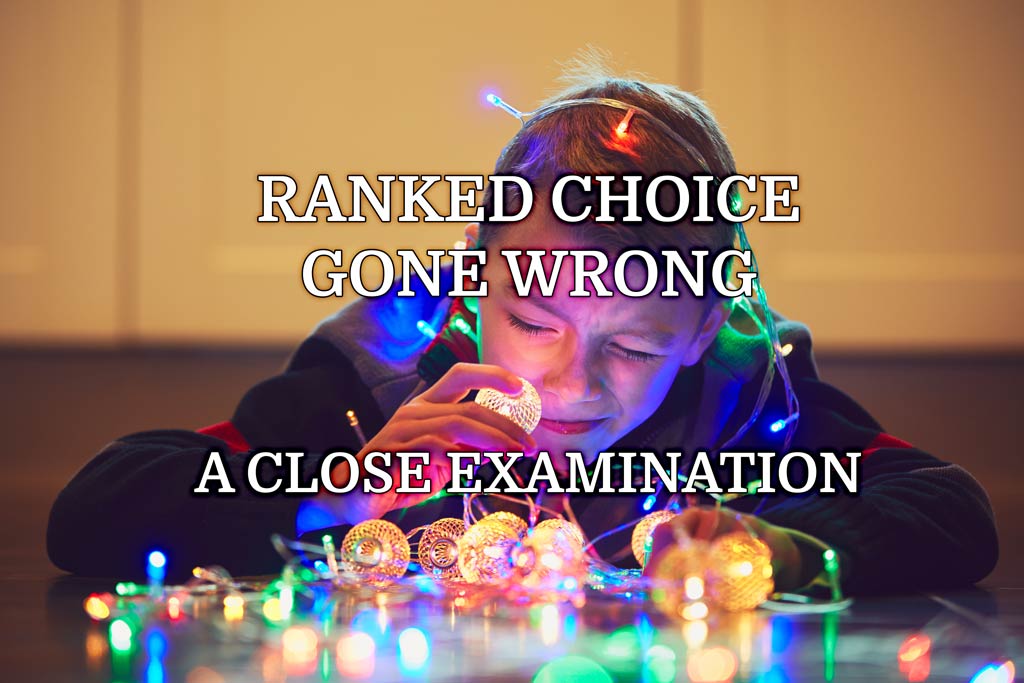 We ran a ranked choice voting poll a month ago to demonstrate how ranked choice polling could show results in real time. This poll was also intended to demonstrate how ranked choice voting works in general. It showed a few other things that are highly interesting. It revealed what can go wrong with a poll, how a poll can be abused and how the information yielded by a poll can be misleading. It also revealed that sometimes, despite how much monkeying around people do with polls, it doesn’t matter. Sometimes there’s enough credible data derived from even the wonkiest poll to work with. Does it tell us anything about who is going to be the next mayor in Boca Raton? Maybe. Maybe not. Take a look at results and be the judge…

It seems like one of those sneaky ways someone who didn’t win a higher numebr of votes in an election to all-of-a-sudden be declared the winner due to technicalities. It’s especially discomforting because the process to report votes and calculate who’s winning is made much more complicated. It muddles the already lacking transparency of the voting process. I’m not for it.

Let’s be open-minded about it.

How can we know whether it’s good or bad unless we try it out? So we did. We put a poll up a month ago where it demonstrated how a ranked choice voting process might work. We hypothetically chose three “candidates” for the next mayoral race in Boca Raton: Bernie Korn, Andrea O’Rourke and our incumbent Mayor: Scott Singer. Only Korn and Singer have actually declared themselves official candidates as of today. Andrea O’Rourke recently clarified that she doesn’t have intentions to run.

The results of the ranked choice poll showed a dramatic difference between the people who said they’d vote for Korn over anyone else. Over 95% of the real time poll results showed Korn as the primary choice. It seems like the popularity of the seated officials is at an all time low. But wait! Those results just might be fake news. Here’s why: the poll intentionally let people vote multiple times. There was no limit to how many times a single participant could vote. Some people who really love to participate in polls voted many, many times. Out of the 655 poll submissions we received we’re reasonably certain that only 51 site visitors participated in the poll. We weren’t blocking fake votes so what ended up happening was that the majority of votes collected ended up being fake. Similar polls that we’ve run with the limitation against multiple votes enabled prevented this phenomenon from occurring.

In this case, from the start, the process mattered more than the outcome, so we didn’t care so much if people voted more than once. Since we were doing an experiment, the more data the merrier. It’s surprising how many times certain people voted more than once, much more than expected. What’s surprising is that some people seem to care so much about the outcome that they’d withstand the tedium of voting multiple times. Why else would someone take the time to submit multiple votes?

If we omit all duplicate votes then we are left with only 51 unique votes from unique voters. Did this change the outcome of who was picked first, second, and last? Yes, but only slightly. Korn still took the majority of the primary votes. Instead of getting 95% of the primary votes he got 75%. In the real time results displayed when site visitors voted and instantly saw the result totals it showed Singer slightly beating O’Rourke with regards to the primary vote. The adjusted numbers, with duplicate votes removed, showed the opposite: O’ Rourke was slightly above Singer.

In a ranked choice voting scenario there would be no need to compare Singer and O’Rourke’s votes because Korn received the majority (<%50) of the votes.

There was no point in doing this poll after all since Korn won the majority. That’s lame. That made this whole exercise somewhat pointless. I could have just fabricated some numbers that illustrated the process better from the start and avoided asking for participation. What I was imagining was that the votes would be more evenly split between Singer and O’Rourke with Korn (no offense Bernie) being the one with the least votes over all. It came out completely opposite of what I expected. I had expected numbers that would be helpful towards illustrating how ranked choice voting works but instead, in order to provide an example, I’m going to have to fabricate some numbers after all.

Here are the actual results, a data set that’s useless towards demonstrating ranked choice voting because Korn won the majority and secondary choices are irrelevant.

Here’s a fabricated data set, not the actual votes that were collected, but instead some numbers that are “made up” for the purpose of demonstrating a ranked choice scenario where secondary choices matter.

In this example, we see how someone winning an election based on choosing a single candidate, where only primary choices count, can end up in a loss where ranked choice voting is used.

In this example Scott Singer beats Andrea O’Rourke by 4% (44.7&% vs 39.8 %) when it comes to voter’s primary choices. But when ranked choice voting is used and Bernard Korn’s votes are omitted and those ballot’s secondary choices are “moved up” we see O’Rourke beating Scott Singer by more than a point. In a ranked choice vote, as opposed to a primary vote, with the data set in this example, we can see O’Rourke winning instead of Singer.

Did this experiment help us understand whether ranked choice voting is better or worse? I don’t know. If I was Scott Singer, in the above scenario, I’d be thinking ranked choice is ultra-lame. But if I was Andrea O’Rourke in that scenario I’d be ranked choice’s biggest fan although I might feel a little sorry for Scott. 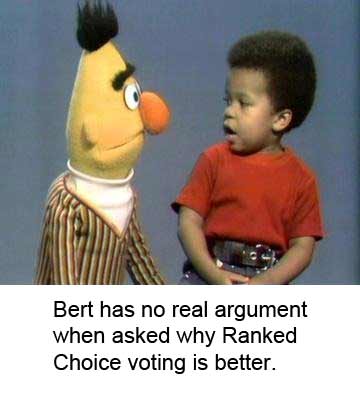 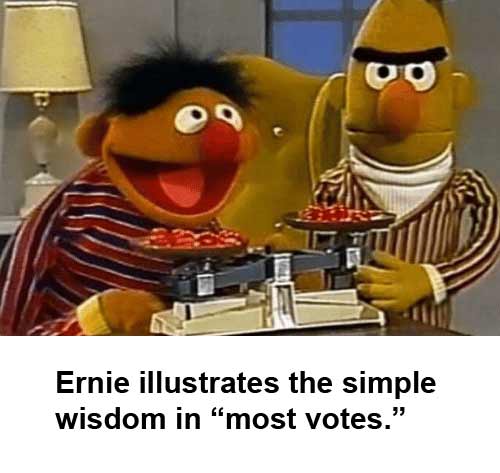 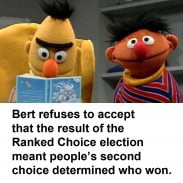 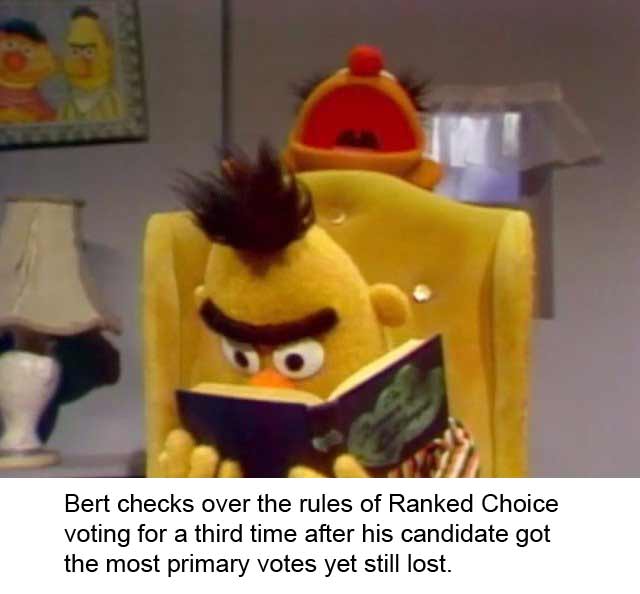 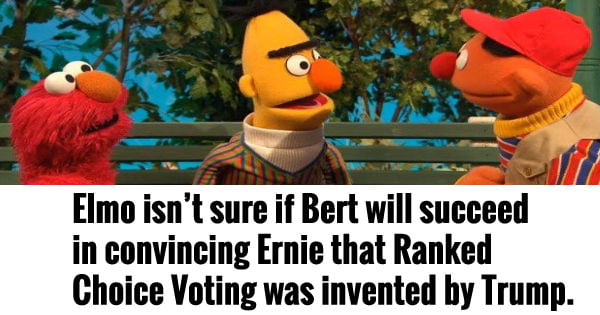 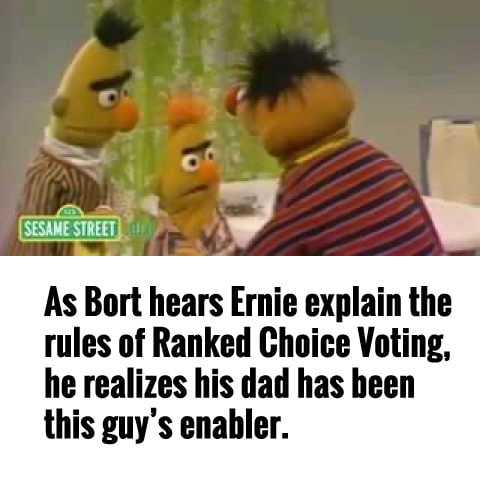 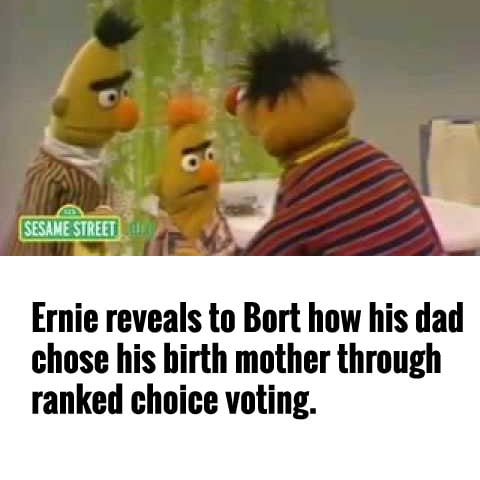 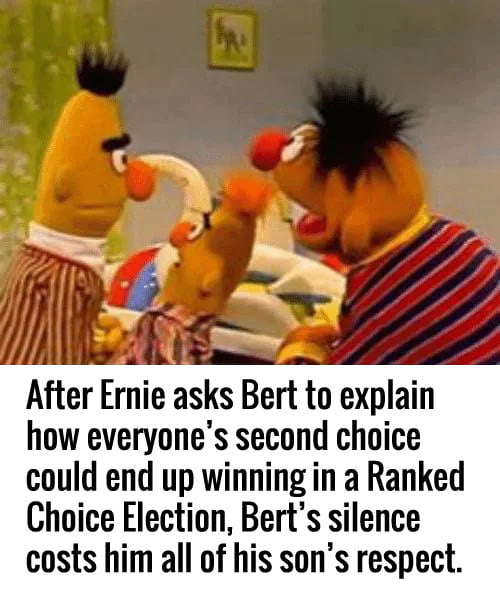